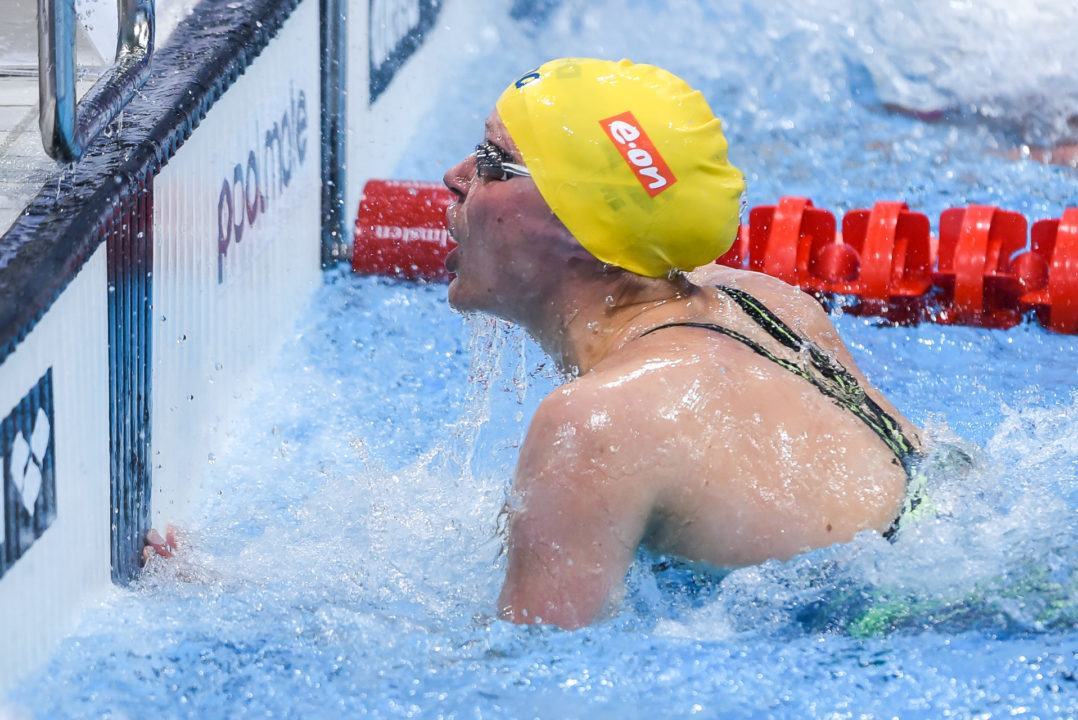 The 10th Bergen Swim Festival is being held at Alexander Dale Oen Arena, Norway, however, it was the visiting foreign talent who kicked the meet off in fast fashion on day 1. Hungary’s ‘Iron Lady’ wasted no time topping the podium in the first event of tonight’s finals, handily winning the women’s 400m IM event by almost 20 solid seconds in 4:36.42. That time is just off her season-best of 4:35.36 notched at the Euro Meet in Luxembourg.

Per her usual, Hosszu took on a monster schedule in Bergen, following that grueling event win up with the short and sweet 50m backstroke. The Bergen Festival sets each non-free 50m race up as 3 rounds, with Denmark’s Mie Nielsen touching first in the first 2 rounds of the women’s splash n’ dash backstroke event. After clocking 29.12 in round 1, then 28.76 in round 2, Nielsen was overtaken by Hosszu in the final medal-determining round, where Hosszu charged to the wall first in 28.37.

The women’s 200m butterfly was Hosszu’s final victim, where the Hungarian won easily in 2:15.98. Hosszu seemingly swam just to the level needed to clinch gold, performing well-off her time of 2:08.05 clocked earlier this Spring at the Swedish Open in Stockholm.

Of note, swimmer Katrine Bukh Villesen earned her junior finals’ win in a time quicker than Hosszu, touching in 2:13.11. Hailing from Denmark, Villesen is the reigning Danish Open Champion of 2017 having earned a time of 2:13.13 just this past April at the championship meet. Tonight’s time fell within .02 of that outing to register as the 2nd fastest of the 17-year-old’s young career.

Hosszu didn’t have enough gas leftover to compete against the big guns in the women’s 100m freestyle, however, as the trio of terror that is Sweden’s Sarah Sjostrom, along with the Netherlands’ Ranomi Kromowidjojo and Femke Heemskerk blew the pool apart in both the morning and evening.

In the 100m free heats this AM, Heemskerk led the pack in a swift 54.33, followed closely by ‘Kromo’ in 54.56 and Sjostrom in 54.93. The final arrangement of the women fell into place with Sjostrom’s rocket-fast 52.86 in the final to score the only sub-53-second time of the field. That earned her the gold in Bergen and also checks-in among only a handful of 52-point outings conducted around the world this season. The Swedish speed demon owns the world’s fastest time thus far of 52.54 from the Swedish Open, so her time tonight fell within .32 of that eye-popping feat.

Kromowidjojo wound up with the silver tonight in 53.72, while Dutch teammate Heemskerk touched in 54.00 for bronze. For the former, that time matches exactly what Kromo produced in Eindhoven to rank as the 11th fastest time in the world. For the latter, Heemskerk was slightly quicker in Eindhoven, holding the world’s 12th fastest effort in 53.77.

Yes,it’s crazy. But there’s a girl who can swim 7 Golds and 2 Silvers alone in a Worlds.

Yes, that sounds so wonderful on paper but then she’s got to swim all those events !! Fine, she may not have to swim the heats of those relays if she were American (perhaps less so for AUS and even less so CAN), but her results at 50 & 100fr in Rio suffered due to also swimming the 200fr plus the relays.

is anyone else starting to think that sjostrom might become the first woman under 52?

If anyone other than C1 looks likely then its most definitely SS. What any one of the teenagers may/may not do is far too speculative but they look to have the raw 50 speed to threaten that mark but also have the capacity to hold it to 100.

If you were to ask me which one of the two, I’d have to lean in favour of SS if for nothing other than she is the stronger physically and C1’s physique remains perennially fragile

Sarah’s back half was amazing. At the turn it wasn’t much between her and the dutch, at 80m she was a body length ahead. Splits were 25.82/27.04! No doubt she has the components to challenge CC for the WR if she puts all her efforts into it. It’s hard to do when you have two ‘easy’ gold medals to defend in the butterfly, but I would like to see her go for it. This is the year to do it.

Then she has to do what she did with 50 fly record. To break the record at the intermediate meet when she feels comfortable of doing that and then to race at WC just for the win.

I think this year is the year to take 4 golds at Worlds, and not think to much about time. At the second half of Worlds she’ll have 3 individual events with prelim/semi/final for each. To break the 100 WR she’ll have to go out crazy fast and I don’t think she’ll risk that in the final. And in the semi she’ll need to conserve energy, since it’s a lot of races. I think it’s much more probable with WR in 50 free, and maybe 52.3 at 100.

Simone will win the freestyle sprint at Worlds. Easy. Sarah wont have a chance even if she swim 23.8 and 52.5 in season becouse Simone has swam a 24.6 and a 53.7. Mel is an great expert and is never wrong.

Sarah Sjostrom’s two 52 races showed how flexible she is with her tactical approach at this distance. One time she was very fast out and showed enough speed endurance to be at the average for elite swimmers level at the second half.
Another day she demonstrated how unbelievably fast she can be on the way home.
100m is too long for Simone and has only one turn. Simone won’t get significant advantage at first half as usual and will lose to Sarah on the way back. She never did it faster than 27.5. But if she does decide to go very fast from the start she will know how Cate Campbell felt like in Rio.
Mel never… Read more »

Erik, Simone will win exactly nothing individually. Mel is a great expert. And of course none of us will/would beat Gross, or Darnyi. But actually he is wrong with Simone.

Well, ..it looks like Sarah Sjostrom feels very comfortable at 52 high and can deliver such result with the high level of probability. The situation reminds me last year when she was very consistent with 1:54 low at 200 free during training season. And then 1:54.0 followed. It makes me to suggest that she will go with 52.3 — 52.45 in Budapest. It is a level of Cate Campbell only. And if to use the recent terminology in measuring of great performance – nobody will see her feet in the final race at 100 free.

Very much so. She is in this unbelievable shape since Luxembourg, January.