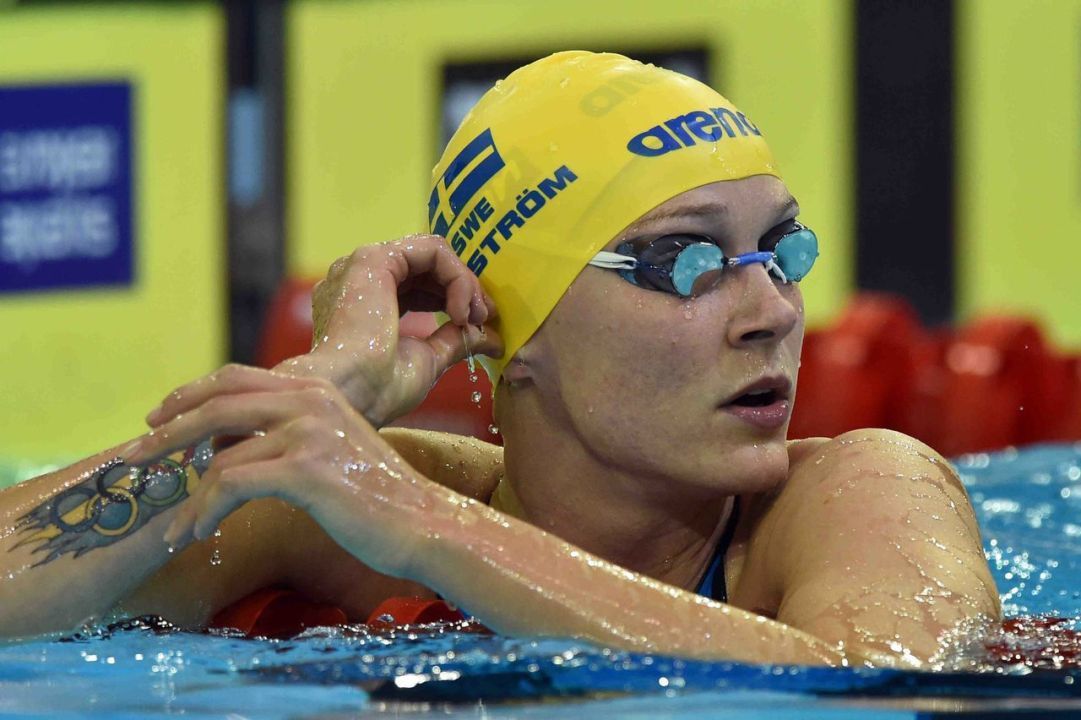 After the first day of prelims at the Bergen Swim Festival the semi-finals and finals should include some exciting racing... Current photo via Arena International

Katinka Hosszu swam all five events on the first day of the Bergen Swim Festival and the way things are shaping up the finals of the events could have some exciting match ups.

Both Hosszu and Sarah Sjostrom have moved on the finals of the 200 freestyle. Hosszu qualified first in a time of 1:57.69 while Sjostrom posted a time of 1:58.25.

Hosszu will face off against Mie Nielsen in the 100 backstroke final. Hosszu had the fastest qualifying time of 59.99 followed by Nielsen who posted a 1:00.80. Nielsen currently ranks third in the world in the event having posted a 59.14 earlier this year.

There were a couple of close races in the men’s events.

Jan Self was the fastest qualifier in the men’s 50 butterfly recording a time of 24.65, one one-hundredth of a second ahead of Viktor Bromer who posted a 24.66.

The top two qualifiers in the men’s 200 freestyle are also only separated by one one-hundredth of a second. Henrik Christiansen posted at 1:51.29 followed by Markus Lie who recorded a 1:51.30.

Iskender Baslakov was the fastest qualifier in the men’s 50 freestyle posting a time of 22.99 he was followed by Doga Celik who recorded a 23.31.

After the allegations about Hosszu came out I wonder if she didn’t swim 100 percent to show she can be beaten. While i do not believe it is necessarily true the thought was in the back of my mind.

That is true to a point. Sarah is a naturally gifted sprinter while Katinka is not (even with all of her incredible stamina and endurance). Once the race hits the 200 distance, that is when the gap narrows and it becomes a crap shoot. But, as far as 50s go, Sarah has the definite advantage. If Katinka HAD defeated Sarah, that would have set the alarms off for quite a few observers.

Here we go again, IF Katinka HAD defeated Sarah…. Casey Barrett did achieve his objectives (I wonder if he got paid for this), the policing is now taken over by the public and people seem to know what Hosszu is allowed and not allowed to do! Well, there can be more IFs than that, IF Sarah does not feel well, If Sarah is not giving all in the semis, IF Hosszu did not swim full speed, IF Hosszu gets to swim sprinter events successfully etc. etc. GET REAL PEOPLE!

Oh please, Mimi. Get over yourself.

They were both slower than usual in the 200 freestyle and sjostrom can go much faster in the 50 free and 50 fly.

All times from today’s meet are preliminary times. They never went head 2 head, but swam in the seeded heats. Finals will be held tomorrow night.