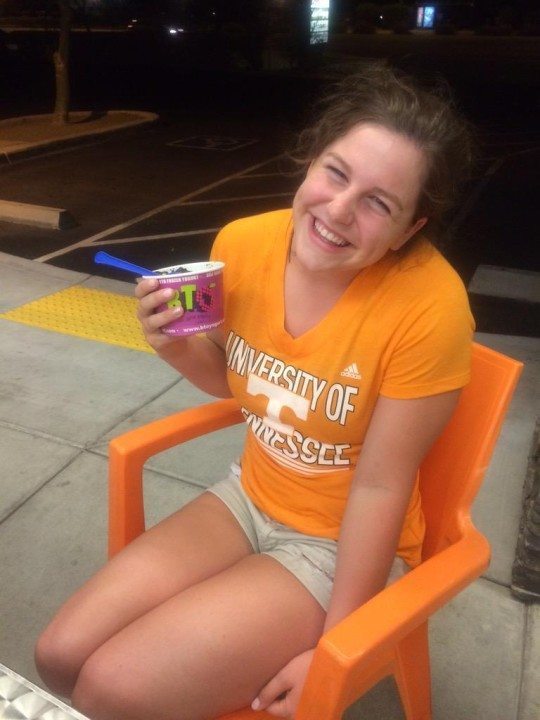 Brianna Leverenz, who is recovering from spinal surgery, has committed to the Tennessee Volunteers. Current photo via Tuscon Ford Aquatics on Twitter

Brianna Leverenz, the younger sister of 2012 Olympic bronze medalist in the 200 IM Caitlin Leverenz, has committed to the Tennessee Volunteers, whom she will join this fall. That sends her to the opposite coast of her older sister, who has completed her four years of eligibility at Cal, and continues to train there toward the 2016 Olympic Games.

Leverenz said part of her familiarity with Tennessee’s program came courtesy of her older sibling.

“Their coach had recruited my sister way back when, so I knew him,” she said. “I took a recruiting trip there and loved it – I really got that ‘homey’ feeling, and I knew it was where I wanted to be.”

Brianna is a very different swimmer than her older sister, and specializes primarily in the freestyle events.

While her times from her senior season don’t jump off the page (she was just 56.0 in the 100 free at the Arizona State Championships), Brianna has good reason – she underwent spinal surgery on May 27th, 2014 (almost exactly one year ago) to correct a combined fracture of a vertebra – an injury that she likely swam with since hurting it four or five years ago in a yoga accident, according to tucson.com. She said recovery from that injury made recruiting difficult, which led to her late commitment.

As a junior, though, she showed her championship pedigree by winning the Arizona State Championship in the 200 free and placing 2nd in the 500 free competing for Rincon High School.

Leverenz does her club training with Tucson Ford Aquatics and coach Paul Stafford, whom she thanked for helping her return from that major surgery.

“It’s definitely been a journey,” Leverenz said, but noted that she’s back to a full training regimen and feeling fully recovered just a year after surgery. With that run of adversity behind her, Leverenz is looking forward to Knoxville.

“Tennessee feels like a great place to get a degree and an even better place to swim for four years,” she said. “I’m absolutely over the moon!”