The Late Alexander Dale Oen Honored with Statue in Hometown 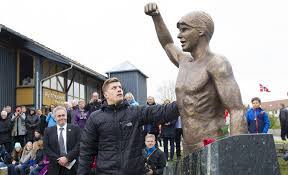 Hungarian swimmer, Daniel Gyurta, was present at the ceremony honoring the late Alexander Dale Oen, the Norwegian swimmer who tragically passed away on May 1, 2012. Current photo via Courtesy of dagbladet.no

Late Norwegian swimmer, Alexander Dale Oen, was honored in his hometown of Øygarden this week, with the unveiling of a statue constructed in his honor.

On May 28th, Bergen, Norway mayor, Trude Drevland, as well as Norwegian swim president, Per Rune Eknes, were on hand at a special ceremony to unveil the creation, which resides at the Coastal Museum in Øygarden, the town in which Dale Oen was born. The artistic piece depicts that of the smiling world champion swimmer atop a podium, with arm raised in celebration.

The statue was designed and created by Os artist Arne Maeland and was presented to an audience accompanied with music and messages in memory of Dale Oen.  At the time he was commissioned, Maeland approached the project with family and friends in mind, stating, “I am in dialogue with those who have asked for the memorial, and family. It is a difficult task. I want to create something that can give something. I have great respect for the family, employer and task.”

Dale Oen tragically died on May 1, 2012 at just 26 years old after suffering from cardiac arrest while at a training camp in Flagstaff, Arizona.  He was the 2011 World Champion in the 100m breaststroke after earning silver at the 2008 Olympics in the same event.

The Norwegian champion will continue to be remembered for his perseverance in competing in those 2011 World Championships just days after 77 of his countrymen were killed in an armed killer’s rampage.  After each race in which he competed, Dale Oen tapped the flag on his cap to remind Norway that he was indeed swimming for his entire country, showing strength and courage in a very dark time.

Now every swimmer will want a statue .