Six Phases of the Freestyle Pulling Cycle: The Propulsion Phase 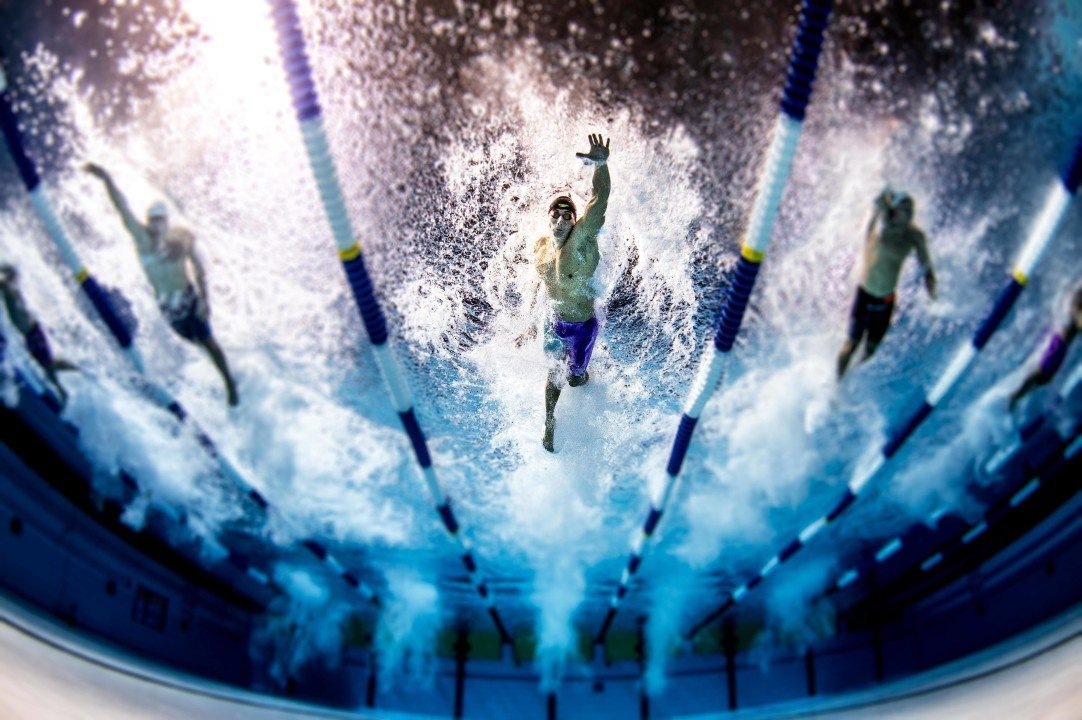 Gary Hall Sr. of The Race Club analyzes the propulsion phase in freestyle, including why the hand contributes the majority of propulsion from the pulling arm. Archive photo via Mike Lewis/Ola Vista Photography

3 Steps to Get Stronger Without Gaining Muscle Mass

Swimmers need to get stronger, but not by becoming bulky. Learn how you can get stronger without gaining muscle mass with the proper dryland program.

Today’s workout will be focused on the core.

Today’s workout will focus on the upper body.

The following is an excerpt from our forthcoming book, Fundamentals of Fast Swimming.

As we observe the path of the swimmer’s hand from the side, with the swimmer moving from left to right, the hand continues along the perimeter of the two-foot clock face going from 3 o’clock toward 6 o’clock. Now, the swimmer’s hand is moving backward (and some downward) relative to the still water and begins generating propulsion. During the early (front quadrant) part of the propulsion phase, the hand and the forearm move backward relative to still water, while the upper arm continues moving forward. There is absolutely no contribution to propulsion coming from the upper arm in the front quadrant. Rather, the upper arm is a source of frontal drag during this phase.

Gary Sr. finishes the front quadrant propulsive phase in .21 seconds and moves into the back quadrant. Photo: The Race Club.

Zane Grothe is in the front quadrant phase of his right arm pulling motion. Notice the very high elbow to reduce frontal drag from the upper arm (VM technology). Photo: The Race Club.

During the early propulsion, it is correct to think of the hand and forearm as being a single unit, connected by a stiffened wrist. However, there is a widely held belief among swimmers and coaches that in this early propulsion phase, the forearm is responsible for as much or more of the propulsion as the swimmer’s hand. That is not true. While we are not able to measure the propulsion coming directly from the forearm during the pull, there are three very good reasons why we believe that the hand contributes the large majority of propulsion from the pulling arm.

First, the hand is a relatively flat surface. While the forearm may be long and may have more surface area than the hand, it is rounded in shape. In fluid mechanics, the shape of the object is more important than the surface area in determining drag force. The flow of water around a flat surface will produce much more frontal drag than the flow around a rounded surface. To generate the most propulsion, we want to maximize the drag force of the hand and arm moving backward to generate more speed of the body moving forward. Newton’s third law of motion states that the swimmer’s hand pushes backward against the water with the same force that the water pushes against the swimmer’s hand. This results in the swimmer moving forward. One action will result in a reaction. This is a perfect example of Newton’s third law.

Second, the hand is moving backward in the water at a greater speed than the forearm. The propulsive drag force is principally related to the type of surface (flat vs rounded), the total surface area and the speed at which that surface moves backward. The hand moves a farther distance backward under water than any other part of the arm in the same amount of time.

Third, and perhaps the most convincing, if you have ever tried swimming with your fists closed, you will find that the amount of propulsion generated from the pulling arm is greatly diminished. Even then, you are not eliminating the hand completely. You are simply making it smaller. Yet, with the same sized forearm moving at the same speed backward, the amount of propulsion a swimmer can generate from the small, tight-fisted hand is small. The full, flattened hand, with fingers and thumb slightly separated, is where most of the pulling propulsion comes from.

Before we had Pressure Meter technology (PM from AP Labs Italy) that measures pressure (force/unit area) on the hand, we engaged in several debates with coaches over where the pulling hand generated the most propulsion—front quadrant vs back quadrant. From a biomechanical perspective, it would seem that the maximum force should be generated as the hand is somewhere near the shoulder on its way back. It turns out, the maximum force of the pulling hand can occur in either quadrant, or right at the shoulder, depending on where the swimmer puts more effort and how well the swimmer utilizes two important coupling motions of the body, shoulder rotation and hip rotation. In other words, it also depends on the freestyle technique being used.

These two rotational motions of the body have a profound influence on the propulsion of the pulling hand. They occur at different times. The peak shoulder rotational speed typically occurs when the hand is in the front quadrant, at, or just past the shoulder, depending on what freestyle technique is being used. The hip rotation occurs about .2-.3 seconds later when the pulling hand is nearing or is at the end of the back-quadrant phase and during the release phase. Whether you consider that the hip rotation occurs first or second depends on whether you are measuring from the start of the underwater pull or from the start of the arm recovery. Either way, it is important to recognize that these two parts of the body rotation do not occur simultaneously.

If the swimmer is rotating more aggressively with the shoulders, but maintaining a more stable hip position, we will find the greatest pulling propulsion occurring in the front quadrant or near the shoulders. If the swimmer pushes the hand hard out the back and rotates the hip aggressively, we can find the peak hand pressure or force occurring toward the end of the pulling propulsion phase or even in the release phase. The three different techniques of freestyle, shoulder-driven, hip-driven and hybrid, all result in different locations of maximum pulling force.

Finally, we would like to clarify one other point. We often hear coaches speak about swimmers finding ‘clean water’ with the pulling hand. To us, this implies that a swimmer somehow needs to move his hands from side to side, to get away from swirling water, to maximize pulling propulsion.

As the hand moves backward in the water, since water is incompressible, the water on the palm side of the hand is motionless until the hand reaches it. Then it must flow around that surface, forming a vortex behind it. The swirling vortex on the back side of the hand results in a small slipstream behind the hand, but not in front of it. Because the hand is a less-streamlined shaped object than the forearm, a larger vortex will be formed behind it. The pressure difference between the palm side and the back side of the hand or forearm is what determines the amount of propulsion. Since force is a vector, which has magnitude and direction, we want the direction of the force vector to remain as straight backward as possible during the pulling motion. Any in-sweeping, out-sweeping or sideways motion of the hand, which is typical of the S-shaped pulling motion that some swimmers use, will simply result in less magnitude of force pressing backward.

Once the hand passes the shoulder, or the 6 o’clock position on the perimeter of the clock, it enters the back quadrant and must take a little detour to keep pressing backward. In the next article, we will explain why.