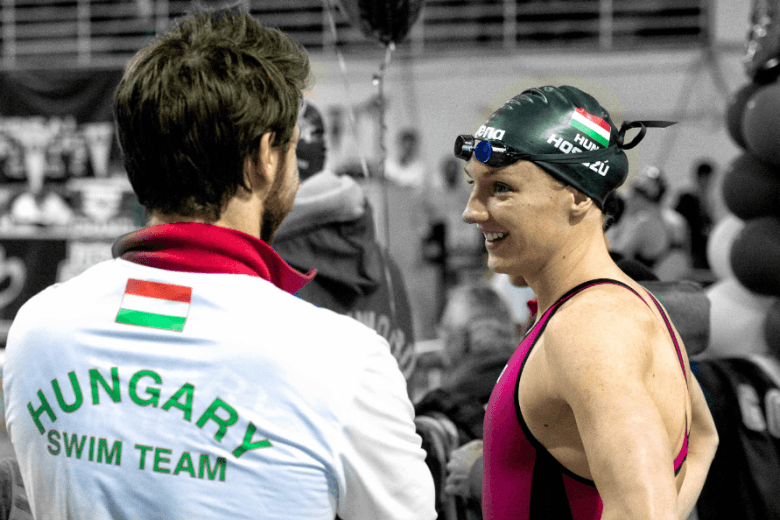 Hosszu and Tusup split late last year as both a couple and as professional colleagues, but after going to the brink, there are recent signs of a reconciliation. Archive photo via Mike Lewis/Ola Vista Photography

Triple Rio Olympic champion Katinka Hosszu and her coach and husband Shane Tusup have made progress in their reconciliation after hitting a rocky period late last year. The two, who married in 2013, mutually announced in December of 2017 that their relationship had hit a “difficult time,”  which led to them attending a major Hungarian awards ceremony separately, and Tusup saying that he would “work to change.”

Since then, Hungarian media reported that Hosszu filed for divorce and testified against her husband in court earlier this month in a wrongful termination suit by a former Iron Aquatics coach. Those divorce proceedings were recently put on hold, however, and on Thursday morning, Hosszu posted the following image to social media of her and Tusup with the caption “you and me against the world”.

You and me against the World

Hosszu originally said that she would return to competition in March, but for the first time since 2014, she skipped the month’s stop of the French Golden Tour, and will likewise not race at the upcoming Hungarian National Championships this week. In an interview with Hungarian media, Hosszu revealed that after months apart, Tusup was back leading her training. She also says that she is planning to race at this summer’s European Championships, but that a 14th European title does not provide as strong of a motivation for her as the Tokyo 2020 Olympics.

Hosszu has not set a new timeline for return to competition.

Shane you are so hot I love you. Thank you for this gift

Wishing the very best for Katinka and Shane. Go get them! You are the best!

Hosszu’s comments about low interest in European Championships may indicate that she is slowing down. She wasn’t that fast in Budapest as many Hungarians here at Swimswam expected her to be. The family conflict may started if Shane Tusup began pushing her harder at practice to regain her previous form. Therefore it would be very interesting to see what she can do in the pool now. She will be 29 in a month.

She said that she isn’t interested in the 14th (LC) European Championship title too much and at same time she stated that the main target is Tokio.

That reminds me the story about Missy Franklin and her low interest in world championships in Kazan because she targeted (as she said) next year Olympic Games in Rio.

You could be right but her trajectory has been pretty much the total opposite of Franklin’s.

Katinka you are the best. Wishing you great successes. If you decide to crush Shane in Hungarian SqueezeEm Headlock, I say you go girl!

Selena And Justin are back together

Is it too late now to say sorry?

Hope they can work everything out in a way that is best, and more importantly healthy, for both parties.