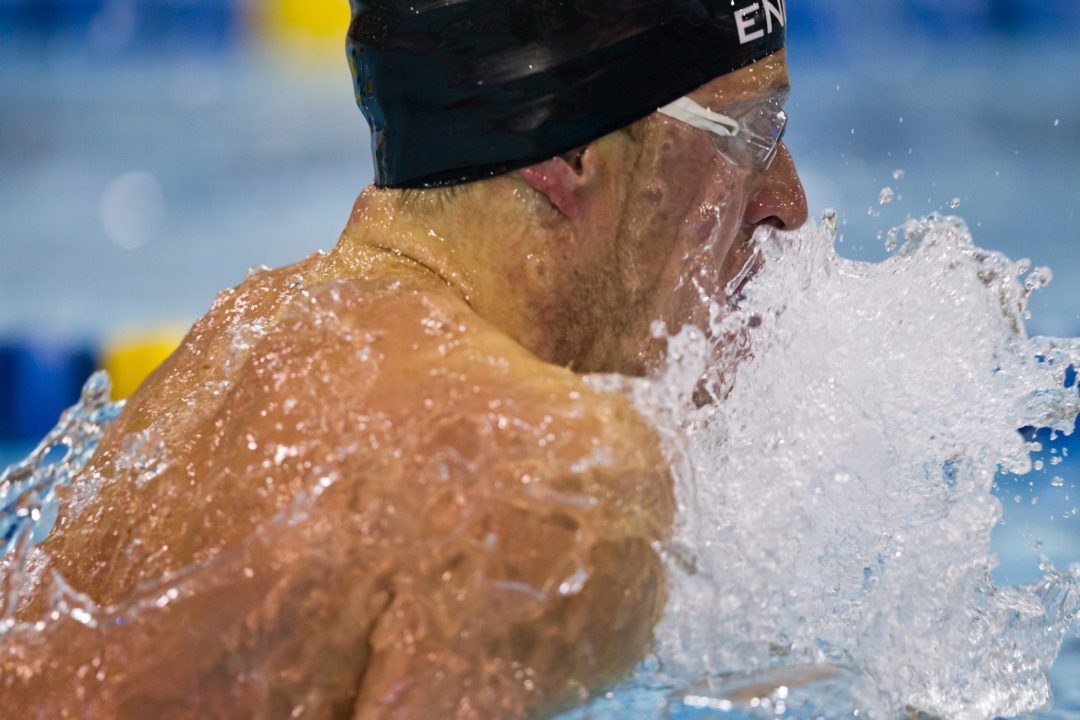 Day 2 of the 2013 U.S. Open Championships in Irvine, California opened on Wednesday. After an exciting first day of competition, the swimmers weren’t backing down without putting up a good race.

North Baltimore’s Gillian Ryan took the top spot on the podium in the women’s 400 freestyle. Ryan dropped about 3-seconds from her preliminary race, touching in the final at 4:07.87.  Right behind her was Indiana University’s Lindsay Vrooman, who went 4:08.13. From the list of splits, Ryan and Vrooman put on an intense race, keeping close until the very end.

Athens Bulldogs’s Amber McDermott  took the bronze. Like Ryan and Vrooman, McDermott was right there split-wise. For a while, the three weren’t even full seconds apart.

The gold went to Island Swimming’s Jeremy Bagshaw, who clocked in at 3:51.09.

Not far behind him, and holding on (and making a slight comeback) to take the silver medal was 20-year-old Nicholas Caldwell. Caldwell only dropped .02-seconds from prelims, going a 3:51.14.

Metroplex Aquatics swimmer John Lewis was close behind at 3rd place with a 3:51.31.

Auburn’s Zane Grothe, who had a heck-of-a meet yesterday, took 5th in the 400 free with a 3:54.68, less than a second better than his preliminary time.

Australia’s 18-year-old Taylor McKeown dominated the 200 breast, claiming gold with a 2:24.92 swim. In April, McKeown was also the 17-18 champion in the 400 IM at the 2013 Australian Age Championships (Wanna guess what her strongest leg of the race may be?).

Emma Reaney from Irish Aquatics, who finished 11th at the Phillips 66 National Championships in the 100 m breast in July, took second behind McKeown. Reaney touched the wall at 2:26.65. Haley Spencer took the bronze in 2:27.16.

Olympian Scott Weltz took the 200 breast by storm, setting a U.S. Open meet record, with a time of 2:10.36. If you think about it, that’s really not that far off of his 2:09.02 that he swam in London (he finished 5th in the event). So,with that in mind, that’s pretty impressive (not that it wasn’t impressive already). Weltz took the record by .02-seconds.

Indiana University’s Cody Miler was not far behind Weltz, taking the silver medal with a time of 2:10.99. Naoya Tomita, from the University of New Mexico, was third. Tomita was 2:11.83.

Sarah Denninghoff, from Longhorn Aquatics, brought home the gold in this event going a 2:09.14. It seemed as if the 3rd leg of her race was turned on in the finals, letting her drop a full second from her preliminary swim.

Canada’s/Missouri’s Dominique Bouchard took the second place spot, not far behind Denninghoff, with a time of 2:09.97, while Dynamo Swim Club’s Kylie Stewart added a bronze medal with a time of 2:11.56.

16-year-old Kathleen Baker finished behind Stewart with a 2:11.95, and not far behind her was 15-year-old Courtney Mykkanen. Mykkanen, from Irvine Novaquatics, finished with a 2:12.04.

Future University of Cal, Berkeley swimmer Ryan Murphy brought his A-game to the 200 back, swimming a 1:55.87 (an almost 3-second drop from his preliminary swim). The fact that he brought it back the last 100 m of his swim with 29s as his splits ensured his victory over Arkady Vyatchanin, the Russian National Team/Olympic Team member. Vyatchanin was almost a full 1-second behind Murphy, touching in for silver at 1:56.70 (still a time drop for him since prelims).

Andrew teDuits representing Wisconsin Aquatics took the bronze medal, touching in at 1:59.14. Australia’s Travis Mahoney was right behind teDuits in 4th, only .12-seconds separating the two.

Honorable mention should go to Jeremey Dezwirek in the C final going a 2:00.79 which is the fastest 200 back by a Canadian this year.

Nice swim for Gillian Ryan. I repeat she has the talent to be the second best American behind Katie Ledecky from the 400 free to the 1500 free. She must only improve her speed base in the next 2 years to be around 1.56 in the 200. It’s the condition for her to be able to swim one day 4.02/4.04.
Impressed by Murphy. It looks like he wanted to respond to Conger. 1.55.87 in the 200 back is a new PB for him. It’s huge when we know it’s his third taper meet in one month after the US championships in Indianapolis and the sectionals in Athens.
It would be good if USA swimming could post the finals on youtube.

Here is a link to all the Open races .Find the athletes name and click on the race link.If there is more than one video,they are usually most recent are first.
http://usaswimming.takeitlive.tv/?p=705

There have been 3 Canadians faster than that this year, 2 at Summer Nationals 2 weeks ago, and one this morning in Barcelona.

Should have had Scott Weltz race Sarah Denninghoff. That would have been a fun race!