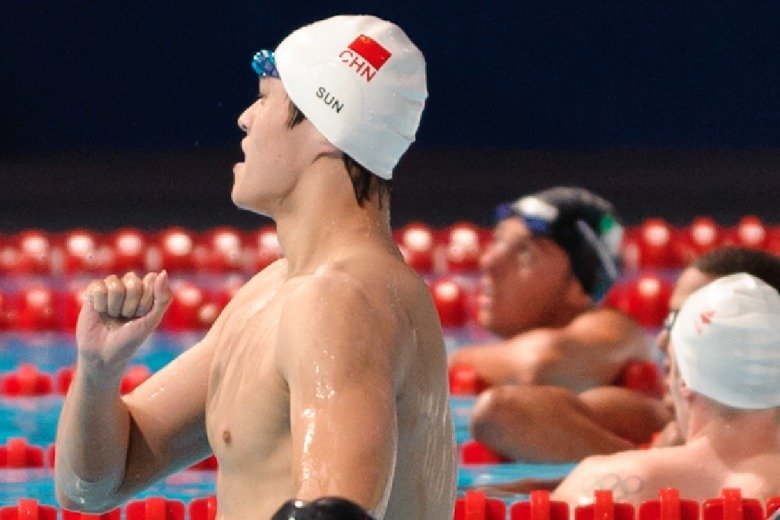 Sun Yang led wire-to-wire to win his second title of the meet in the 800m freestyle. (Credit: Victor Puig, victorpuig.com)

Three more national records were broken today by the Asian swimmers participating at the World Championships. Amit Ivry, the first Israeli swimmer to make it back at the Olympics in 2012, set her second record of the meet in the 50 backstroke in the preliminarily heats at:28.75.

All-American Cal Bear swimmer Stephanie Au Hoi-Shun from Hong Kong set her fifth Hong Kong record in the 50 backstroke today. She set it in semi-finals where she finished 13th (:28.33). Hoi-Shun also owns records in the 200m, 400m, 800m, 1500m freestyles and the 4x100m medley relay, and has represented her country at the Beijing and London Olympics.

Joseph Schooling set his second Singaporean record this morning. He took down the 200 butterfly on day 3, and today he now owns the 200 IM record at 1:59.99.

Schooling trains at the ever-famous Bolles School in the USA. It is believed that he still has one more year at Bolles before he heads off to college. He’s made a great deal of improvement here in Barcelona by making it to semi-finals in the 200 butterfly and 200 IM .

China’s Sun Yang led wire-to-wire to win the title in the men’s 800 freestyle tonight. The top four in the field stayed relatively close, but both could make a substantial move to overtake his efficiency.

Kosuke Hagino from Japan is on his fourth individual event; tenth swim of the meet after the men’s semi-final of the 200m IM. With a very solid swim tonight, he is second to Ryan Lochte (1:57.38). Hagino is very weak in the breaststroke, easily the slowest in the top eight, but he is one of the strongest to race home.

China had a very solid night of swims. Here is a quick recap of their night below: