The journey towards swimming for the Harvard men wasn't always an easy one, and Schuyler initially postponed his enrollment at Harvard. Stock photo via Olympic Channel 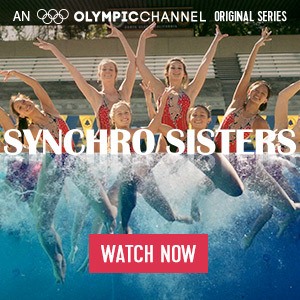 What It’s Like to Nearly Drown in an Olympic Final

A video released by the Olympic Channel this month recounts the women’s 100 fly final from the 1960 Rome Olympics…. 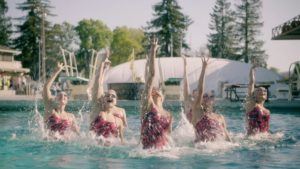 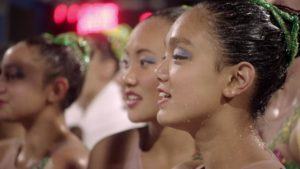 Taking viewers behind the scenes, Synchro Sisters shows you the sport of synchronized swimming like you’ve never seen it before. This isn’t your parents’ type of Olympic television. Synchro Sisters has an edge. Think Bravo or Vice.

This isn’t your parents’ type of Olympic television. Synchro Sisters has an edge. Think Bravo or Vice. The production-value and narrative-strength of this series is top-notch, the best you will see.

See how two of the world’s best Synchro Clubs strike a balance.

Courtesy of The Olympic Channel

As a recruit, Schuyler Bailar received a lot of interest from Division 1 coaches before deciding that Harvard was his first choice. His original plan was to swim on the women’s team at Harvard under head coach Stephanie Morawski, but made the decision to swim for the men’s team with the support of Morawski and men’s coach Kevin Tyrrell.

The journey towards swimming for the Harvard men wasn’t always an easy one, and Schuyler initially postponed his enrollment at Harvard. Bailar’s parents joined the segment to discuss Schuyler’s struggles with eating disorders. They talked about the mental health issues and challenges Schuyler had to overcome as he realized he was transgender.

About the Olympic Channel

Imagine caring so much about another person’s identity so much that you can’t simply do what your comment says. Instead, you insist on leaving a backhanded slight that clearly implies your discontent. Just bad

If u dont wanna comment , than write nothing because i sense a degree of ” Ohhh no ” in that no comment .

You are right. There are two sexes male and female. A total distortion to allow this fuzzy line between which team to swim with because someone is “confused” . Just like the wrestler in Texas with the unfair advantage of being male and competing as a woman. I saw a comment further on about an anthropologist digging up bones; only two choices to make.

sex and gender are not the same thing. Anthropologists can also tell what one’s ancestry is from bones, but it is widely accepted that race is a social construct

The Fall of the Roman Empire. Sad actually.

Genders are like the twin towers, their used to be two of them now it’s just hard to talk about

I love the incorrect correction. It’s *there you dingus

No, making a college swim team is hard. Talking about gender isn’t. Try harder and try some willingness to see beyond the end of your own nose and you may find it isn’t as difficult as you fear.

Genders are like the twin towers, they used to be two of them now it’s just hard to talk about

Isn’t there a new tower? Don’t tell the saudis about that or the gender thing & things will be ok.