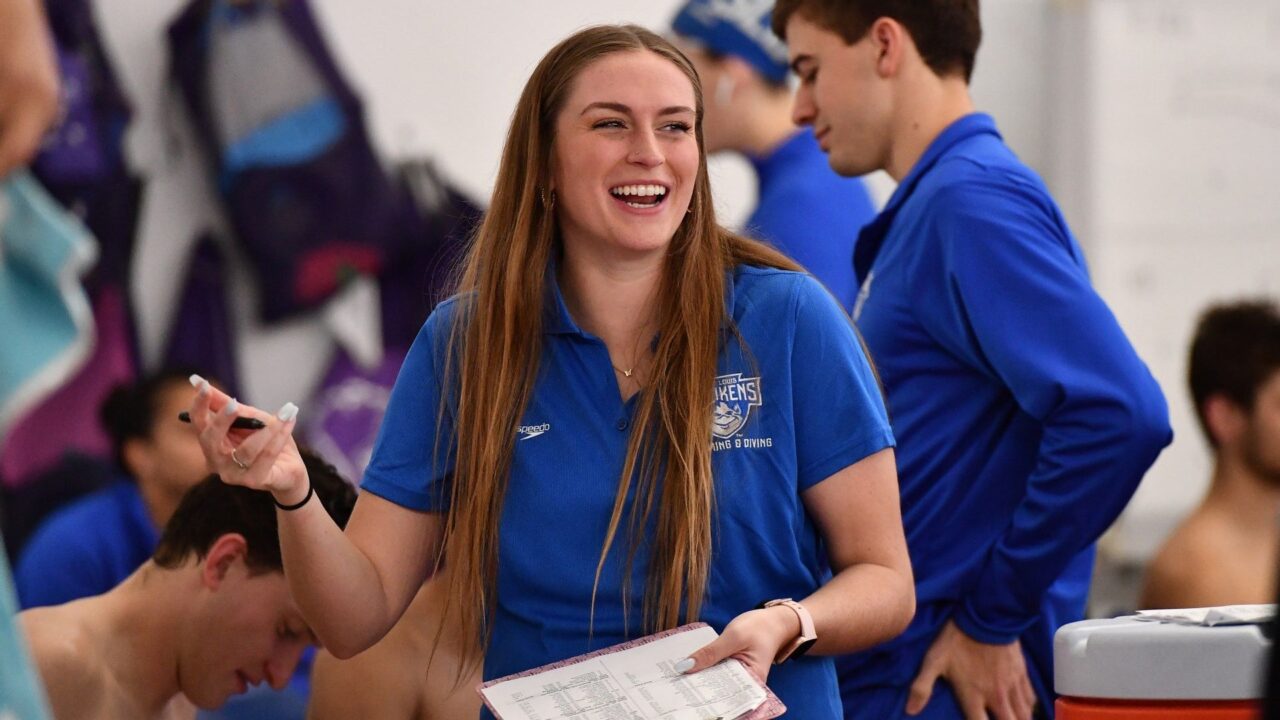 Mary Woods, who spent the last two seasons at St. Louis as a graduate assistant, will serve as the program's interim head coach for the remainder of this season. Current photo via St. Louis University Athletics

Saint Louis University has suspended its search for a new head swimming coach and instead appointed Mary Woods as the interim coach for the remainder of the season. SLU’s athletics director Chris May says that the administration will revisit the search at the end of the season.

“Mary has done a remarkable job guiding our swimming and diving teams,” May said. “We are confident in her ability to continue leading our student-athletes to great success this season.

“Due to the inopportune timing of the position opening, we have decided that it is in our student-athletes’ best interest to focus on the team now and discuss the search after the season,” May continued. “I have great confidence in Mary and the way in which she is leading the teams. The student-athletes have had great swims this fall, and we are excited to support them throughout the rest of the season.”

SLU was left in a bind searching for a new coach after Jim Halliburton resigned a week into the school year in late August. Halliburton had been with the program for 21 years and was the longest-tenured head coach in program history. Halliburton took a job as an assistant at cross-town Washington University, a Division III program.

They now turn to Woods, who is the longest-tenured swim coach on the staff. She spent the last two seasons as a graduate assistant before being promoted to a full assistant earlier this year.

Also on staff is Austin Mayer, who has been with the team for 15 months. He was listed as an assistant coach last season, but is now listed as a graduate assistant. The diving coach Renee Ham is in her 3rd season with the Billikins, having joined the program about 5 months before Woods. Ham is a part-time coach and also has a full-time job in biotech. She also has experience coaching swimming at the high school level.

Woods is a native of Carmel, Indiana where she swam for Carmel High School and Carmel Swim Club – one of the top youth programs in the country. She went on to swim for Division III Depauw University in Greencastle, Indiana. At Depauw, she was a team captain. Her best North Coast Athletic Conference finish came as a sophomore, where she placed 2nd in the 100 IM and 7th in the 100 breast. A year later, she was 3rd in the 10 IM and repeated her 7th-place finish in the 100 breaststroke. She graduated with school records in the 100 IM, 200 free relay, 200 medley relay, and 400 medley relay.

Woods graduated from Depauw in 2019 with a degree in kinesiology. She is currently working on a Master’s degree in Project Management at SLU, with a scheduled completion date of December 2022.

The Billikens have had a busy start to their 2022-2023 season in spite of the coaching turnover. The team has already had 5 dual meets, plus an intrasquad meet. The women’s team is 9-2 so far, including a win over their former coach Halliburton and WashU. The men’s team is 5-6. Many of those meets have been against D2 and D3 teams, though the women went 3-2 and the men 2-2 at the Butler double duals against a full Division I field.

I am not used to schools keeping a 100 IM record. What was her record in this event?

Lots of conference championships, especially in D3, have the 100 IM as a championship event.

Good luck to Mary Woods, I can’t wait to see what she does!