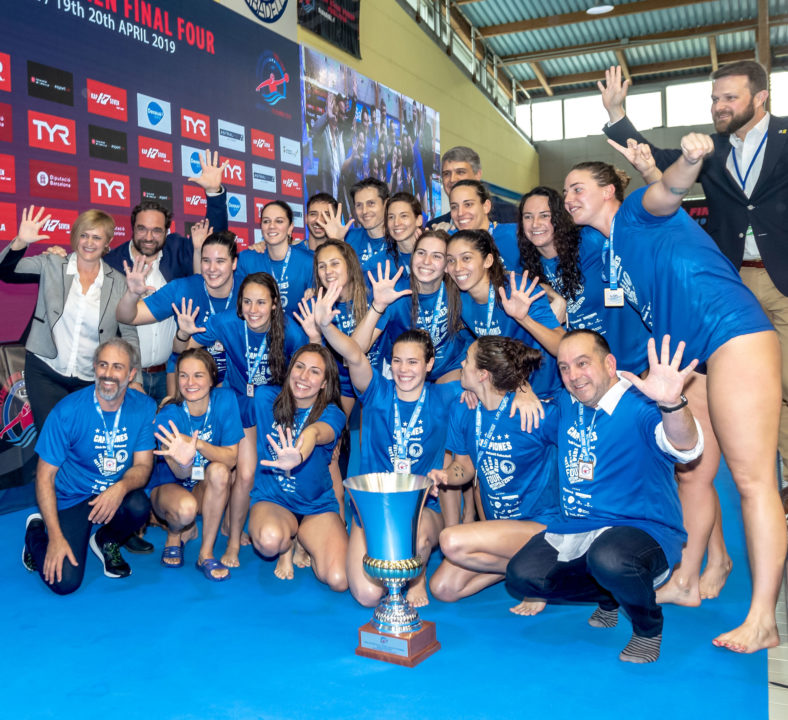 In one of the most incredible finals in recent years, host Sabadell came back from three goals down in the last period and with a 5-0 rush in the last five minutes they managed to beat Olympiacos to clinch their 5th Euro League trophy in nine years. Current photo via Deepbluemedia / Giorgio Scala

In one of the most incredible finals in recent years, host Sabadell came back from three goals down in the last period and with a 5-0 rush in the last five minutes they managed to beat Olympiacos to clinch their 5th Euro League trophy in nine years. Vouliagmeni claimed the bronze with an 8-7 win over newcomer Padova.

In front of a capacity crowd of 1,500 supporters, Olympiacos took a dream start as a stunning double from Aussie Hannah Buckling gave them a 0-2 lead in a span of 45 seconds. Sabadell needed 5 minutes to get on the board, Beatriz Ortiz opened their account but Nikoleta Eleftheriadou netted a nice action goal for 1-3. Maica Garcia halved the distance shortly before the break from a man-up but Alexandra Asimaki’s brilliant goal from the center reset the two-goal cushion early in the second.

Despite leading 2-4, two mistakes in offence – quick lose of the ball – blew away the Greeks’ advantage in 27 seconds and the hosts could even have taken the lead but missed their extra. Instead, Chrysoula Tsoukala found the back of the net for 4-5 but Kiley Neushul put away a 6 on 5 for 5-5. Two great action goals closed down the thrilling first half, Buckling netted her third but 23 seconds later Ortiz let a blistering shot fly for 6-6.

Eleftheria Plevritou put Olympiacos ahead once more in the third with a nice lob but Judith Forca offered something similar in a dying extra to make it 7-7. Then a fast steal in front of the Greek goal set up a one-on-one for Neushul and she didn’t miss it to give the lead for the host for the first time in the game. It didn’t last long though, as Asimaki earned a penalty and Alkisti Avramidou buried it for 8-8. The Greeks missed a man-up but after some fine defending Tsoukala netted a free throw from 7m with 32 seconds to go before the last break and they kept the lead as the shot from the hosts’ man-up ended up in the goalie’s hands.

That seemed cost the Spaniards dearly as two minutes into the last period Plevritou’s blast found the top corner and just 48 seconds later a quick play in a 6 on 5 set up Buckling who didn’t miss it and with 5:17 to go Olympiacos led 8-11.

An emergency time-out was called by David Palma and that worked out. Forca came up with another nice lob, then Matilda Ortiz copied that just 49 seconds later and it was close again at 10-11. The turning point came when Olympiacos earned a penalty in a man-up but the fans’ whistling put too much pressure on Plevritou and she couldn’t put the ball away – Laure Esther stopped it –, while the other end Neushul finished off an extra (her 4th), so Sabadell’s Easter resurrection needed just 2:02 minutes as they got back to even at 11-11 with 2:53 remaining.

And their rise towards heaven continued, Beatriz Ortiz netted an extra with 1:58 to go, then Maggie Steffens sealed the host side’s win 40 seconds before the end. Sabadell staged an amazing 5-0 run in the last five minutes to claim their 5th trophy in nine years while the Greeks will long remember that missed penalty which would have given them a two-goal lead 3:28 minutes before the end…

In the bronze medal match Vouliagmeni gained a significant 2-6 lead shortly before the middle break but the Greeks seemed to have laid back too early. Padova, missing a penalty late in the second, bounced back with three connecting goals for 5-6 and had a couple of clean shots on levelling the score but Ashleigh Johnson came up with some fine saves and two more goals in front re-froze the game. Though the Italians pulled two back in the last 90 seconds but the last one came too late, 13 seconds from time. Thus Vouliagmeni claimed a second bronze after 2013, while Padova had to settle for the fourth place upon its debut in the Final Four.

“It was an incredible game, a brilliant final where both team played great. When we were three goals down I called a time-out, made some adjustment in defence and asked the players to push as hard as they could and they just did that. They are great players, best in the world, only those are capable of playing such an amazing five minutes.”

“I think we did a good job but we just couldn’t hold on in the last minutes. Though I have to complain as we had to face four exclusions in the final period which is not really usual at this level. I know, we had a penalty and we missed it, that was too bad as they scored immediately from their next attack and the psychology of the match turned quickly and my players couldn’t handle that pressure. We played well in the two days, perhaps two such games in two days were a bit too much. We used a lot of energy while beating Vouliagmeni in the semi-finals and this also played some part in our collapse in the last minutes, even though overall we played well in the final too.”

“It was a hard match as our main centre-forward (Eleni Xenaki) got two exclusions in the first period so we had to use different tactics both in attack and in defence. We played well in the second period but made some mistakes in the third but at the end we won and got a medal which is important. We might say we are happy with this bronze as we returned to the Final Four after long years with a new and young team, but we know we could have done better in the semis. We had a bad game yesterday against Olympiacos but next time hopefully we’ll get an even better result.”

“The first half was full of mistakes, the third period we played our water polo and then had the chances but we missed them. This is a great experience for this team to be here in our first Final Four. Now we felt a bit saddened because of the loss, but I’m sure next day we will know that we’ve learnt useful lessons here and we will be ready to return in the following years.”