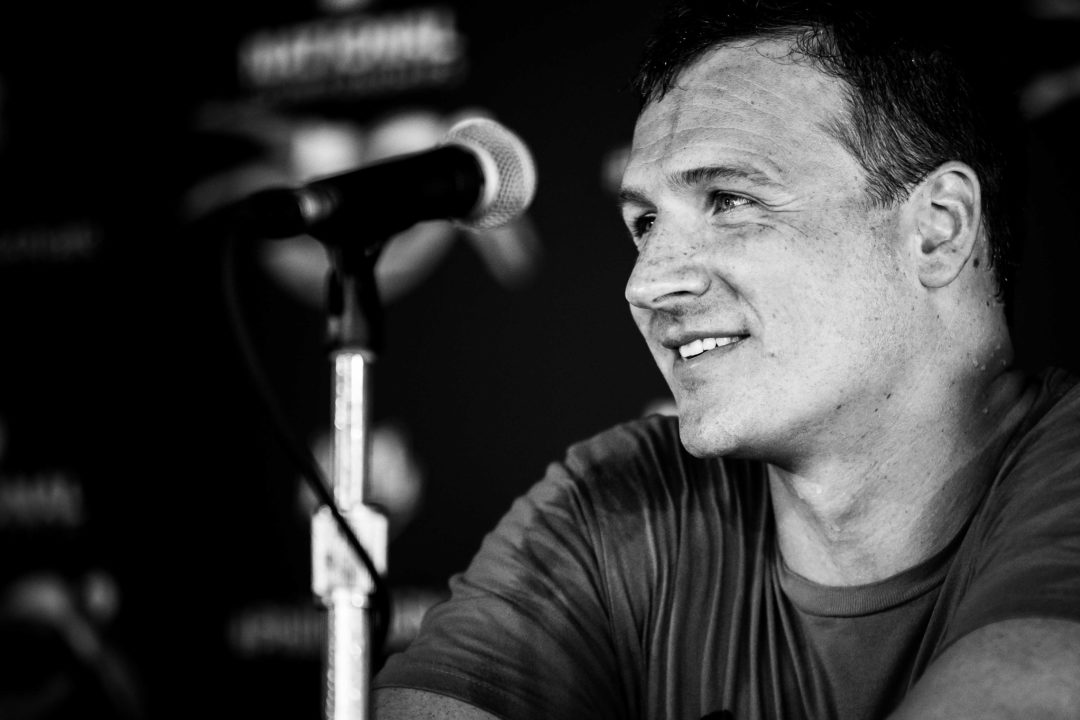 The nearly-35-year-old Lochte is entered to take his first step toward Tokyo Wednesday morning in Palo Alto. Current photo via Jack Spitser/Spitser Photography

He is entered to time trial a 200 IM (shown on Meet Mobile), in which he holds the world record at 1:54.00. Time trials are scheduled to begin around 11 a.m. Pacific Time. Lochte is scheduled for a press conference in the early afternoon and also entered to swim the event on Sunday.

After serving a 14-month suspension for intravenously receiving a vitamin infusion at a rate above the allowed limit, Lochte became eligible to race in the middle of last week. Although the qualification period for Nationals had officially closed, SwimSwam learned from USA Swimming that Lochte’s times from the 2018 Mel Zajac Jr. International Meet early last June were eligible for entry; he swum at that meet before he was officially suspended on June 23. Despite his suspension being backdated to May, the nature of his infraction was such that his ensuing times did not need to be forfeited, USA Swimming said.

Lochte is also entered in the 100 fly, 100 back and 400 IM this week with times equal to or slower than the ones from that meet, but was granted an “exemption” to enter the 200 free. Lochte has only logged 24 races since Rio prior to his expected Wednesday morning swim.

The nearly-35-year-old did not strictly need to swim at Nationals to get back on the United States’ 2019-2020 National Team, and receive the funding that comes with it. Lochte just has to be in the top six American swimmers, based on FINA world rankings, in an individual Olympic event – from the combined results of USA Swimming or FINA sanctioned meets – with his qualifying swims occurring on or before August 25. Note that time trials do not count toward making the team.

Torrey–any idea whether this 200 IM time trial will count towards the National Team?

Good question. No, they do not.

On the live stream or nah?

I can’t even get the live stream to load. Would love to see this. Do you have a link?

Cool gets banned and is given an exemption

What is this? He compete only one events? I did not know. Very unclear article.

Timing is everything. The gas station run-in wouldn’t last 10 minutes in the current news cycle and would be relegated to the sports section.

Prediction or his actual time?

That is what he went. Looked smooth.

Whatever anyone’s opinion is on Lochte, he sure draws the interest of the swimming world. This time trial may be the one of the most intriguing time trials to be held at Nationals…Wishing him the best, regardless of past fault, questionable behaviors and obvious shortcomings, he deserves the change to get things back on track. Americans, including me, love a comeback story and this one seems like one to me, and at 35 years of age. Admirable. Just think, he could just have faded away (he seems to have enough money) and been a husband and father to those two cute kids. I know it takes chutzpah to get back on that stage with the attention he knows will come… Read more »

Wow, thats not bad….I think he’ll need to be faster on Sunday…..US is gonna need another 200IMr if Chase falls apart again.