Rio 2016 Olympics Preview: Ledecky Not Alone Under 4 in the 4 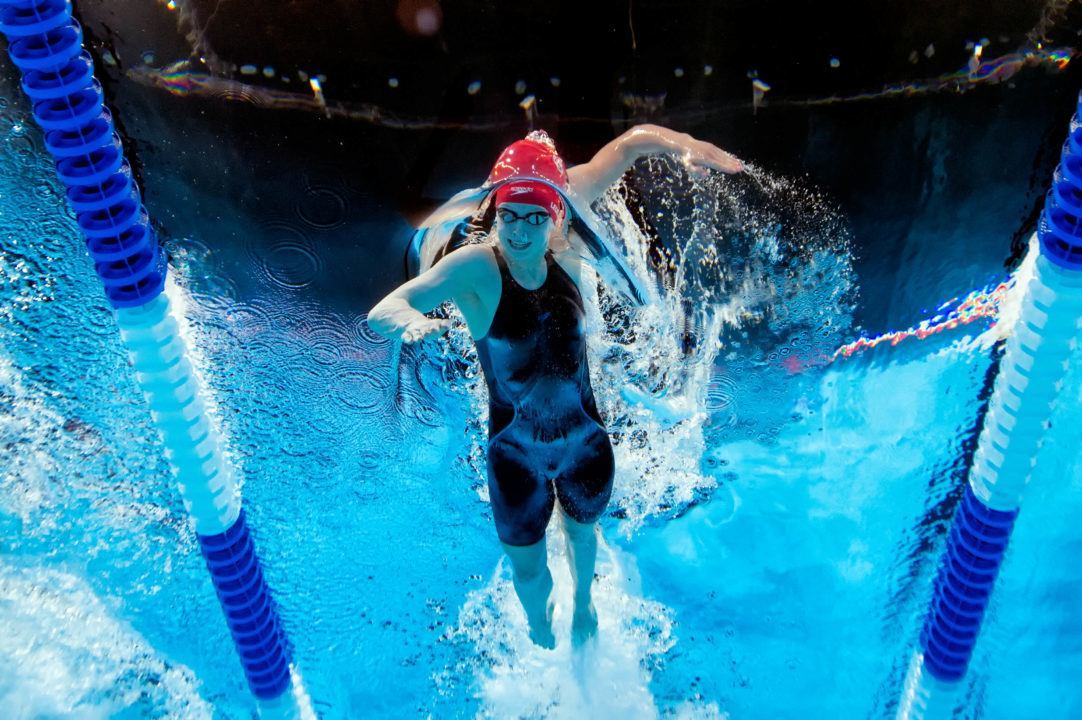 Leah Smith is the favorite for silver-- is she also the favorite to join Ledecky under 4:00 in Rio? Current photo via Mike Lewis/Ola Vista Photography

Let’s skip ahead a little, past what you’re used to– Katie Ledecky is far and away the favorite to win this event, she will win the gold and break her own world record barring some huge disaster, and so on. Ledecky is an otherworldly swimmer who is going to be great in Rio, perhaps even better than she ever has.

But, is it time for someone else to join her under four minutes (in textile, that is)? Before Ledecky did it, only Italy’s Federica Pellegrini had hit the wall in the 3’s, and that was just once. It was done at the World Championships in Rome in 2009 during the suit era, and Pellegrini has since moved down to the 100-200 range.

Smith, before her steady progressions in long course over the last two years, first made headlines with a 4:33 in the 500 free B final at NCAAs as a freshman with Virginia. That time would’ve been third in the A final, just over a second outside of 1st. 2014 may seem recent, but that was back when Missy Franklin was NCAA runner-up in the 500 free. It feels like ages ago.

As Smith continued to improve in the small pool, she started firing off some increasingly impressive times in the big pool. After a strong freshman year at UVA, she pulled out a 4:06.93 in April after going nowhere near her 2012 best of 4:07.10 for almost two years. Smith then vaulted herself into international recognition with a 4:04.66 at the 2015 World University Games in a new meet record in prelims– she later would win the event in the final.

And, now, after peppering her 2016 season with eight swims under 4:06 (including a 4:03.33 from prelims of the Arena Pro Swim Series stop in Indy), Smith looks to be the silver medal favorite in this event. Her 4:00.65 from the U.S. Olympic Trials was so incredibly impressive, slashing 4.01 seconds off of her previous best from the World University Games, and she now sits less than seven tenths of a second away from that four minute barrier.

So, if anyone is going to join Ledecky under four minutes, it should be Leah Smith. She is incredibly fast in season, and has dealt with the daunting “double taper” while training in the NCAA. It was very striking to see another girl besides Ledecky flip and hit the pad at the 300 mark under three minutes in a 400 free, but Smith (2:59.51) did just that. In fact, she out-split Ledecky (WHAT?!) on the back half as a whole, and was faster on each of the last four 50’s save for a tie at 30.30 on the last 50.

On top of all of that, there are several other medal contenders in this race who have been swimming very well lately. Australia’s Jessica Ashwood broke her own national record in the 800 free at the Santa Clara stop of the PSS with an 8:18.14, going faster than her time at the 2015 World Championships. Though geared more for the 800, Ashwood holds the Aussie record in the 400 free at 4:03.34, the time she clocked in Kazan to win bronze. Ashwood has shown how fit she is this spring, and it wouldn’t be surprising to see her go right past the 4:03 mark in Rio.

France’s Coralie Balmy dropped a 4:03.66 at the Sette Colli Trophy in Rome, which ranks #4 in the world this year. Balmy was 6th in the final in London. Canada’s Brittany Maclean broke the national record with a 4:03.84 from Canadian trials, adding another sub-4:04 name to the mix. Sharon von Rouwendaal, who won silver in this race in 2015, has had more success in her career in open water, making the 400 free a relative sprint for her. She has the chops to medal, but with a focus on open water, she may not be able to bring enough speed to earn hardware here.

Hungary has had a national record battle brewing this spring between Iron Lady Katinka Hosszu (who seems to make her way into the conversation about, like, every single event there is) and distance specialist Boglarka Kapas. Hosszu’s 400 free probably sits behind five or so Olympic events in terms of her best races, but she held the national record at 4:05.51 until Kapas smashed it with a 4:03.47 at Euros. Hosszu swam a 4:04.96 just a week later, showing the world that she can do damage in this event. Kapas, though, might be the pick for bronze out of the bunch behind the Americans.

With Kapas, Balmy, Ashwood, and Maclean all under 4:04 this spring, things are looking very packed for bronze. Add Lauren Boyle of New Zealand to that list, who was 4:03.88 last summer, and you’ve got quite the crowd behind the USA.

Dark Horse: Melania Costa Schmid of Spain. She was very strong at the Barcelona World Championships in 2013, swimming a 4:02.47 to earn silver behind Ledecky (which was Katie’s first time under 4:00, by the way). While she was barely under 4:08 at Spanish Nationals, she’ll likely be at 4:05 or better come August.

No one mentioned Mireia Belmonte of Spain yet.

Belmonte has been focusing in the 400m free the last years, she swam 4:03 in 2014 and 4:04 in March 2015 (despite being injured in shoulders). This year she is back in her best shape after overcoming injury. In the Spanish trials in March she couldn’t swim the 400m due to gastroentheritis. Last week she swam 4:05 in the Spanish nationals just after altitude training and no taper. Therefore I think she will be in the hunt in Rio and will make the final, she can have a potential 4:02 or less in her.

Anyway, I think that the heats are gonna be a hard filter and several favorites will be out… Read more »

Of course, but I was writing about the women’s race. The 400 free could be one fantastic race. I’m really looking forward to it. Smith has the advantage of being the huntress chasing down Ledecky, if she keeps her nerve. We shall see if The Assassin slays the huntress or barely escapes her.

I’d like to see Leah cause an upset and break the WR while doing it! And as an Aussie see Ashwood medal.

There,s really no competition in the women,s long distance races. It,s just ledecky. The women,s 200 will be an actual race though.

I think Smith will actually give chase even more to Ledecky in Rio as she is on the rise this past Spring continuing into Trials. She is more comfortable with the tempo required for the 400 than Ledecky, whose most natural cycle rate is best suited for the 800. Ledecky has always been very patriotic and team oriented in her young career, so seeing Smith close to her as a teammate will be a great motivation for her to swim her heart out. I think Ledecky will win, but Smith will be faster than her swim in Omaha, giving a scare to Ledecky. I think we will see a world record in the 800 because by that point in the… Read more »

Katie is definitely the favorite, and based on the trials, Smith is probably the favorite for the silver. But I think Kapas, Maclean and Ashwood have better times in them that the predictions in the article, and Carlin should also be in the mix. After Ledecky, I think there is definitely a great podium fight in this event.

I am going to predict Ledecky, Ashwood, and Smith — who just barely gets past Maclean and Kapas.

I wish Pellegrini would race the 400 free. She would have great chances of medal and she would make the race more interesting