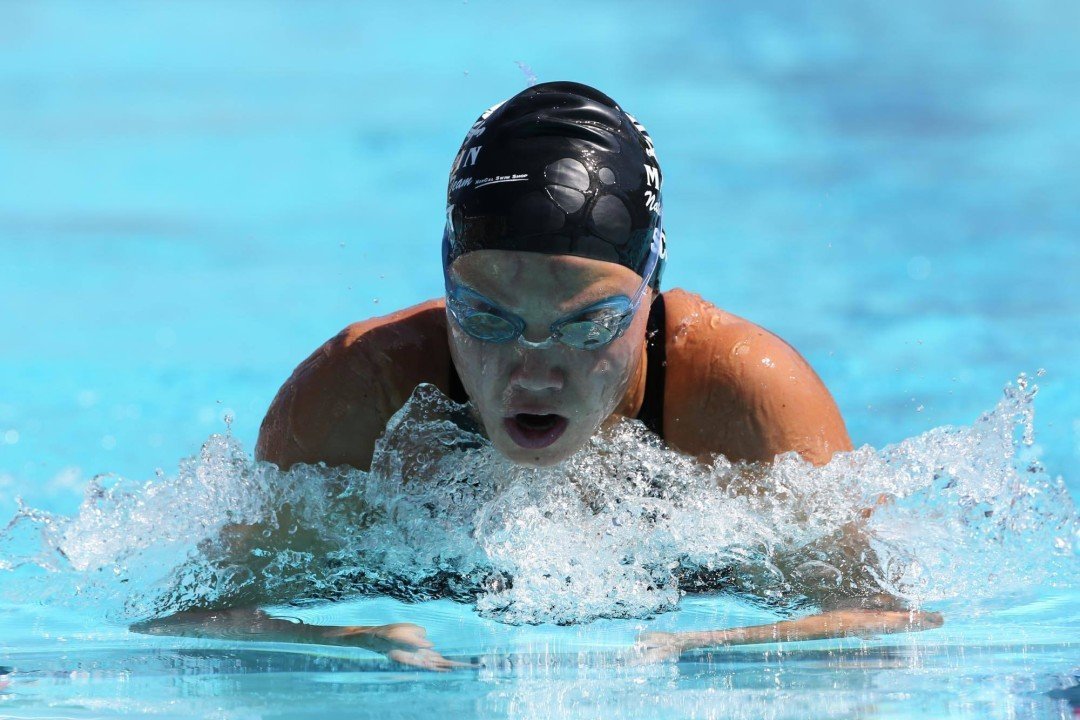 Riley Scott entered Saturday’s final session of the 2015 North Coast Section Championships as a heavy favorite to win the titles in the 100 breaststroke and 200 IM races, but a protest robbed her of the opportunity to win her first title in the former of those events.

Scott was the defending section champion in the 200 IM, and placed 2nd in 2014 in the 100 breaststroke – 1.4 seconds faster than any other returning swimmer.

Scott cruised to a 1:01.86 second seed in prelims, but when finals arrived on Saturday, her lane was occupied by the eventual champion Marie-Claire Schillinger (whose finals 1:01.12 would’ve given Scott all she could handle anyway).

The head NCS representative was the only one authorized to answer questions about the incident, but he was unavailable for comment after the meet.

As documented in Petaluma360.com, Scott was allowed to swim time trials in prelims of her league championship meet, but not participate in finals: a brokered solution between her coaches and the meet director after complaints from other coaches in the league about Scott’s relative lack of participation in the high school season.

Scott is a senior who has signed to swim at USC, and was the only Petaluma High School swimmer at the North Coast Section meet.

While I can understand and even commiserate with High school athletes and coaches regarding the perceived minimal participation by some elite swimmers, this smacks of a vengeful act.
In USA swimming, if a swimmer does not have a coach on deck, s/he would be automatically assigned to the meet host. The purpose of this is primarily for safety reasons. In high school swim, many coaches would have less experience than this young lady. In this case, it appears that a coach was available during one swim and not another.

Either way, perhaps the coach filing the protest, the one that scanned the deck and searched for a reason to protest, should be up front about about why s/he… Read more »

It would be great if everyone could just embrace fast swimming. Don’t make the athlete suffer. Protest was a d&[email protected]@move.

Life is full of choices.
This young lady has plenty of choices, more than most swimmers her age.

As a HS coach in Texas and a registered USA coach for 37 years, I would believe that the young swimmer, her parents and her HS “handlers” knew the rules, knew she was on the “radar”, and should have been more prepared to assure that she had an official CIF accredited coach on deck for her 100 breast swim in Prelims.

In our HS Programs in Texas, the same type rule applies: “no school sponsor, no swim”.
That is to protect the liability of the school, the UIL, and to assure that the rules are followed for a level playing… Read more »

Since when is it the Swimmer’s responsibility to get their coach to the meet!!!???!!! Coaches with attitudes like yours give coaches a bad name!

As both High School and USA swimming coach myself, I would never put my neglect onto a swimmer’s shoulders! As a hired coach and responsible adult, it is my responsibility to be in attendance or to have other responsible credentialed personnel in attendance. Additionally, should unforeseen/unavoidable circumstance detain me preventing/delaying my attendance & from fulfilling my duties as required by the regulations of the governing body of the event, as a responsible coach all means necessary would be used to contact event officials and setforth some sort of accommodations for their athlete(s) participation and care until… Read more »

0
0
Reply
Amen to that!
Reply to  CoachSuze

Coachsuze I could not have said it better!! I totally agree that what is going on in this sport with the lack of class and sportsmanship ii is sad. I agree that if an infraction to the rule has occurred then that’s the breaks, we all need to follow the rules set forth. But if it is just people being vindictive that is something that is as unacceptable as their behavior…..there ought to be a rule.

0
0
Reply
Joey Garcia
Reply to  Amen to that!

Due to her choices to practice in Florida and swim in Ireland, Riley didn’t swim a single high school meet this year. She was not allowed to swim a regular prelim or score in a final at her league championship where she needed a time to qualify for NCS (they compromised and let her swim a trial). The Petaluma coach wouldn’t even go with her to NCS (and why should she, Riley didn’t swim for Petaluma all season).

And then Riley expected to waltz on deck at NCS and take a top spot in two events, displacing someone else who went to every dual and invite meet of the season, including the league championships?

In my opinion Riley is… Read more »

Riley did not practice in Florida, she participated and won the NCSA Junior National Championships in the 200 BR along with top 8 finishes in other races. Because of participation in this meet, she could not compete with her HS through this time frame.

Then, yes, she was selected to represent her country in Ireland, and opportunity that she should not pass up. This also conflicted with her participation in HS meets.

Finally, there was no compromise as there is no rule that prohibits Riley not to be able to swim at the league meet. In actuality, not swimming finals of the league meet was what the SCL coaches desired.

The responses to this past weekend’s events at NCS are hitting emotional strings for many of us. As a coach an a parent of a high school swimmer, it is clear that this is something we should all be addressing.
As someone who witnessed this past season for Riley, I have to say that, as you may well imagine, there are many more facts that led to the incident at NCS than have been given in the article above. While it is factual for the Section meet itself, it does not address the incidents leading up to this meet.
It cannot be contested that Riley is a talented athlete who has worked hard to swim at the level… Read more »