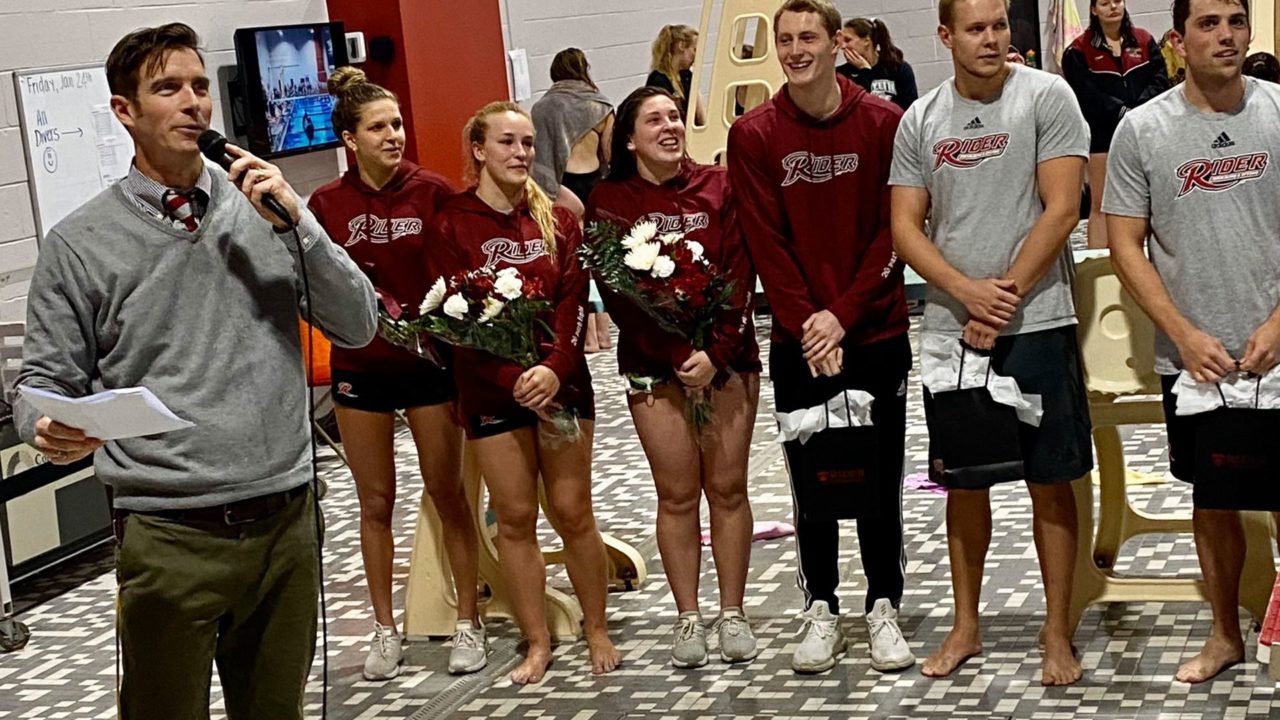 LAWRENCEVILLE, NJ – The Rider University women’s swimming and diving team capped its 2019-20 dual-meet season with a resounding victory against visiting Lafayette on Friday evening at the Richard A. Coppola Pool inside the Canastra Health & Sports Center on campus.

The Broncs (2-5) won their second home dual meet this season.

Senior Olivia Iswalt (Reading, PA/Berks Catholic) had arguably her strongest meet of the year as she racked up two individual wins. Iswalt came in first-place in both the 50 free (24.84) and the 100 free (54.22).

Jessica Homitz (West Chester, PA/Unionville High School) ended up in first-place in the 100 back with a time of 59.83.

Kyra Schwerzler (Mullica Hill, NJ/Clearview Regional) finished first in the 100 breast thanks to touching at 1:08.85.

Senior Meg Tomayko (Murfreesboro, TN/Siegel) had another strong meet on the boards for the Broncs. She won both the 1M and the 3M for the second meet in a row. She finished first in the 1M with a mark of 278.25 and she tops in the 3M with a score of 265.57.

UP NEXT
Rider returns to action in a little over two weeks at the 2020 Metro Atlantic Athletic Conference (MAAC) Championships. The four-day event takes place February 12-15, at the Burt Flickinger Athletic Center at Eerie Community College in Buffalo, New York.

Note: Rider men haven’t posted a press release as of the posting of this article.

LAWRENCEVILLE, N.J. – The Lafayette swimming and diving team continued their season Friday night with a dual meet at Rider. Both the men and women fell short of the win, but still had some impressive performances.

On the women’s side, Sydney Perks continued her big season, winning the 500 yard freestyle in a time of 5:32.44. Her winning time was over 14 seconds faster than the second place finisher. Lindsey Monaco (5:46.80) and Samantha Bluvol (5:51.10) took home second and third in the race.

The final win for the women came in the 200 yard freestyle relay as the core four of Tara Leininger, Samantha Talecki, Emily Wilson, and Natalie Richardson took home first in a time of 1:42.77. The winning time was over six seconds faster than the second place team. The Leopards also took home second and third place in the relay.

On the men’s side, the Leopards also won two races.

The first belonged to Sean Reilly in the 500 yard freestyle. His time of 5:08.37 was nearly six seconds faster than the second place finisher. Lafayette was not finished in that race however, as Ameen Belkadi (5:14.35) and Matt Cummings (5:27.53) finished second and third in the race respectively.

The final win for the men came in the 200 yard freestyle relay. The foursome of Ethan Miller, Jamison Crow, Bryce Currie, and Justin Lloyd took home first place in a time of 1:29.16. The Leopards also finished second and third in the race as well.

The Leopards return to action today with a dual meet at Colgate at 3:00 PM EST.