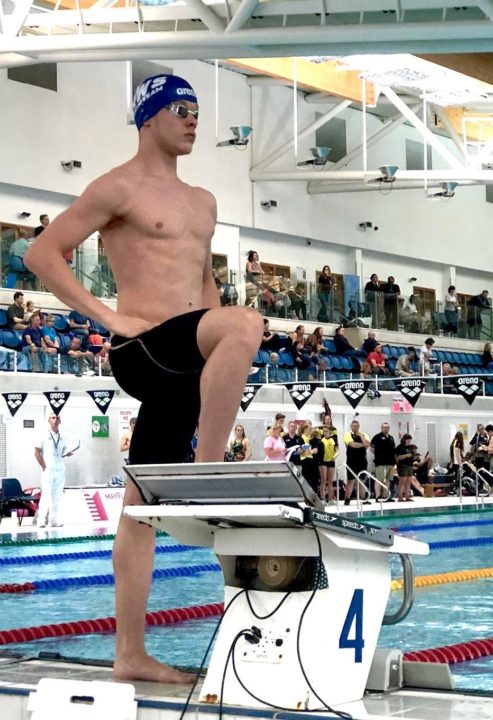 European Junior Champion Matt Richards threw down multiple personal bests over the weekend, while Joe Litchfield got some racing in before Short Course Euros. Archive photo via Amanda Richards

Harvey Hadden Sports Village played host to the 2019 Midlands Winter Short Course Championships over the weekend, combining the East and West Midland Regions of England. Olympians and up-and-comers alike hit the pool to get some racing under their belts before the British Universities & Colleges (BUCS) Championships, Swim England Winter Championships and other key meets come up on the calendar.

As for 21-year-old Joe Litchfield, the Loughborough athlete was a late addition to the British roster for this year’s European Short Course Championships taking place on December 4th-8th in Glasgow, Scotland. He and Brodie Williams joined the previously announced 16-strong lineup for Glasgow, able to be added due to a refocusing of resources. With that in mind, Litchfield made the most of this preparation opportunity, reaping multiple medals before the 2-day affair in Nottingham was done.

Litchfield just edged out elite junior swimmer Matt Richards in the men’s 200m free to kick-off his campaign, touching in 1:46.21 to Richards’ 1:46.22.

Both men registered new lifetime bests in the event, with Litchfield’s mark overtaking his previous career-quickest of 1:46.34 from 2017 BUCS. Richards’ previous PB rested at the 1:47.53 the 16-year-old notched last year. Litchfield and Richards now enter the list of top 30 British performers in the men’s 200m free in slot numbers 26 and 27, respectively.

Litchfield also got it done in the men’s 100m fly, clocking a time of 52.57 to beat Northampton’s European Junior Championships 200m fly finalist Edward Mildred, who finished in 53.10. Litchfield has been as quick as 51.87 in this event, while Mildred’s time represents the 16-year-old’s fastest ever. In fact, Mildred’s outing makes him the fastest British 16-year-old of all-time, overtaking the previous age group leader of Jacob Peters who held a time of 53.62 at 16 years of age.

Richards’ performances were far from over, however, with the Royal Wolverhampton athlete collecting wins across the 50m free, 100m free and 50m fly sprints. Richards scored a morning 50m free time of 22.42 in the heats before adding slightly in the evening to wrangle up gold in 22.57. The 2 times represent his best-ever in this short course meters format.

Richards was also impressive in the 100m free, where he secured his place atop the podium in a mark of 49.35, just slightly of his morning swim of 49.24. Nonetheless, both times get beneath his previous career-quickest of 49.38 he logged in December of 2018.

Deventio Excel’s Jacob Whittle, now 15 years of age, was also under 50 seconds in the men’s 100m free final, touching in 49.53. Whittle had never before been under the 50-second mark in SCM prior to this Midlands meet. Whittle’s 100m free performance now makes him the fastest British 15-year-old of all-time in the event, topping the previous leader of Lewis Burras and his outing of 50.38.

Olympic silver medalist Siobhan-Marie O’Connor headlined the women’s action, with the versatile ace taking the 100m fly in 58.23 and the 200m IM in 2:08.42. As we reported back in August, O’Connor had decided to move from her longtime training home of Bath to Loughborough to see her through to Tokyo 2020.

2016 Short Course World Championships gold medalist Molly Renshaw made waves in the breaststroke events, beating the 50m sprint field by well over 1 1/2 seconds in 31.33. She also snagged the 200m breast victory in a mark of 2:23.81, logging a time about where she was at through this same time frame in 2018. Renshaw owns the British National Record in this event with the 2:17.98 notched nearly 3 years ago.

Nova Centurion’s Freya Colbert made her presence known in the women’s 100m free event, topping the field in a time of 56.61. The 15-year-old was just off her lifetime best of 56.43 from last year, but her outing was enough to hold off Northampton’s Betsy Wizard, who produced the only other sub-57 second time of 56.94 to take silver.

Abbie Wood of the International Swimming League (ISL) squad New York Breakers raced this weekend as well, producing a winning effort of 1:57.15 to come out on top of the women’s 200m free. That’s a big-time personal best for the Loughborough athlete who typically races IM events. Her previous 200m free PB rested about a second slower at 1:58.22 from the 2018 BUCS championships.

Colbert was runner-up to Wood in that 2free battle, stopping the clock in 1:58.70. Her performance now checks her in as the 2nd fastest British 15-year-old performer all-time, positioned only behind Freya Anderson’s monster 1:55.44.

Harriett West of Braunstone proved too quick for the women’s 50m fly field, reaping gold easily in a time of 26.57. Behind her was 14-year-old Laura Dickinson, who produced a mark of 28.48 for silver.

How old is Dean now ?

Is Siobhan Marie O’Connor being coached by Mel Marshall or Dave Hemmings?

Hemmings. He had Abbie Wood, Max Litchfield and I think Joe Litchfield already in the IMs.