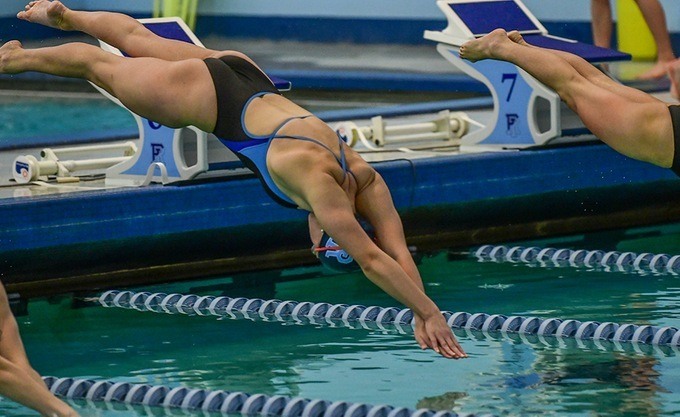 Rhode Island’s senior captains had a strong showing in the meet, earning crucial points for the team. Nicole Petta won two individual events, the 100-yard breaststroke and the 200-yard IM. Eliza Anderson added to the team’s total by winning the 50-yard freestyle. Grace Kneller earned a first-place finish in the 100-yard freestyle.

For the second meet in a row, Rhode Island won the last event of the day, the 200-yard freestyle relay. Maddie Horner, Grace Kneller, Kelly Blake and Eliza Anderson provided the final winning points for Rhody.

Standouts from the Pool:

Quotable:
“It was a great meet. Just like our meet against Maine, it went back and forth and we ended up winning by three points. We had some really great swims, but the relays were by far the most exciting.” – Assistant Coach Lilli Falconer

What’s Next:
The Rams will take on the Providence Friars on Wednesday, Nov. 7 at the Taylor Natatorium. The meet is scheduled to begin at 6 p.m.

Freshman Phoebe Shaya continued the stellar beginning to open her collegiate career, earning victories in both the 1-meter and 3-meter diving events. Classmates Anne Moser and Sara Rizzetto also impressed, each coming away with multiple wins. The team competition came down to the final event, with Rhode Island narrowly beating the Explorers in the 200 free relay to win the meet, 151-148.

The Explorers return to action on Wednesday, Nov. 7 with a meet against Penn at Kirk Pool.