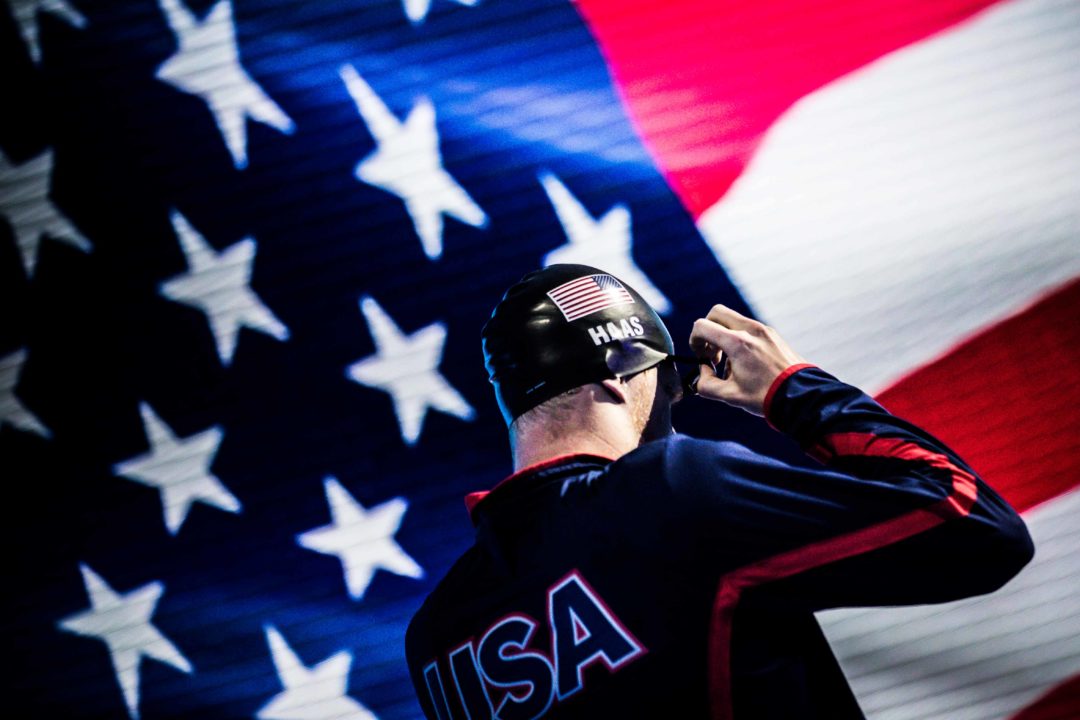 Townley Haas is expected to be among the swimmers added to the American relay in the final of the men's 4x200 freestyle. Archive photo via Jack Spitser/Spitser Photography

With a potential tightly contested battle brewing in the men’s 4×200 freestyle relay on day six of the World Championships, we thought we’d take a look at which of the swimmers will remain on their teams from the prelims and who will be switched in for the final.

The Americans, who haven’t won the World title since 2013, have a fairly straightforward plan of attack.

Townley Haas and Andrew Seliskar both had a disappointing showing in the individual event, missing the final, but project to swim in finals.

The team clearly has enough faith in Haas, who anchored them home to win the Pan Pac gold medal last summer in 1:43.78, to bounce back. He was left off the prelim relay, along with Blake Pieroni, who has been on fire going sub-48 individually in the 100 free twice. Pieroni owns a PB of 1:45.93 in the 200.

Those two should come in, while Seliskar and Zach Apple will likely remain from the prelim team.

There, of course, is the option to throw Caeleb Dressel onto the team, despite the fact he already has a double with the semis of the 100 fly and 50 free during the session. If only one of the legs from prelims was under 1:46 Dressel would’ve remained an option, but chances are he won’t swim after Seliskar and Apple both stepped up.

Duncan Scott tied for bronze individually in the 200, while James Guy hit 1:45 and was reportedly very pleased with his performance despite missing the final. Guy has also proven to be clutch on relays, anchoring the team to gold in Budapest in 1:43.80.

Calum Jarvis will certainly remain from the prelims after splitting 1:45.94, while the coaches will have a decision to make between Thomas Dean (1:47.34 lead-off) and Cameron Kurle (1:46.97). If we take reaction time out of the equation, Kurle was slightly faster ‘through the water’ by 0.08.

The 2017 silver medalists from Russia will likely only bring in one swimmer, Martin Malyutin, who tied with Scott for that bronze medal in 1:45.63. Based on prelim splits, Ivan Girev (1:47.01) will be the one to come out, leaving Aleksandr Krasnykh, Mikhail Dovgalyuk and Mikhail Vekovishchev.

For the Australians, individual entrants Kyle Chalmers and Clyde Lewis will come in. Lewis swam a personal best of 1:44.90 out of the semis before placing sixth in the final, while Chalmers came back after failing to make the top eight with a PB and silver medal in the 100 free.

The Brazilians and Germans aren’t expected to make any changes after using their top four guys in the morning. Italy could hold as well, but will likely make one change.

The team of Filippo Megli, Matteo Ciampi, Stefano Ballo and Stefano di Cola surprisingly claimed the top seed in the heats in 7:04.97, and didn’t have a weak leg throughout the team.

Megli had the slowest split (thought it was a lead-off) in 1:46.79, but there’s no way he’ll come out after breaking the National Record in the individual event in 1:45.67.

It would be hard to leave Gabriele Detti, who split 1:45.75 on a relay earlier this year, off the team that all of a sudden is a medal contender. He’s been on form here, swimming a PB and winning bronze in the 400 free.

Don’t put haas on it

He’s always (as far as I can recall) been a stellar relay swimmer. He also earned one of the top two spots. He’ll swim.

I don’t see any way Dressel swims this. He’s got a lot of big swims left including 2 semis in the same session. If you want your world record shot (maybe 2) – leave him off and trust in Haas, Apple, Seliskar and Pieroni to get it done.

Seliskar apple peironi Dressel not in that order tho

Agreed. Townley has swam TWICE in 6 days – needed to see him swim again.

Pepperoni with a side of Apple

Tonights relay highly like Seliskar, Haas, Perioni, Apple. I don’t see how they can leave off Perioni. He is swimming well. Haas is a question mark but I doubt he will be left off either. Just have to make sure Perioni and Apple swims in the right order.

No way they drop Seliskar, surely…

So, a world record from four guys who’ve never won an individual Olympic gold medal, the best of whom doesn’t swim the event and is coming off two other swims in the same session?

I want some of whatever choice stuff this guy’s smoking.

Matthew Wilson has only won a medal at one major meet in an individual event (bronze at pan pacs last year), but still managed to tie the WR in the semis so anything goes at this point

Why did they even put conger on the relay

Only you are prescient.

Conger was 1:45 low in Rio and Budapest it’s witty a shot to see where he was at.

Yea, screw that guy. He may have made the team in this event in 2016 and 2018 but he definitely doesn’t deserve a chance once we know that it didn’t go well.