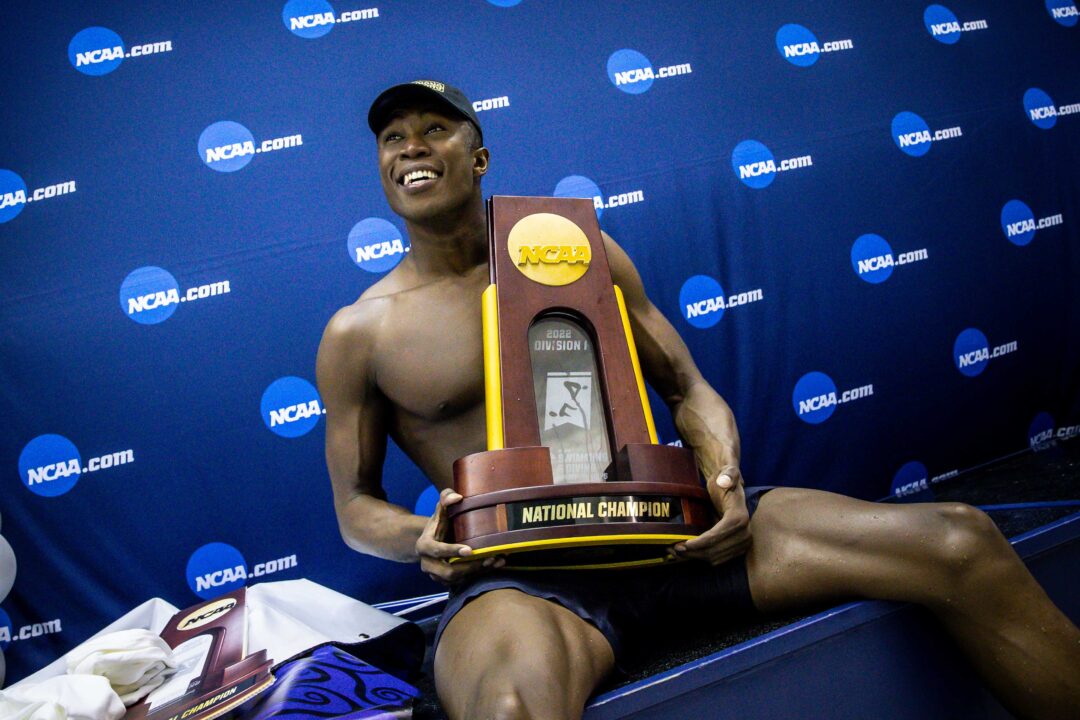 Reece Whitley announced via his Instagram on Sunday that he will be taking his 5th year of NCAA eligibility at Cal. The 5th year of eligibility was granted due to athletes who competed during the COVID-19 disrupted 2020-2021 season.

This announcement comes as a bit of a surprise, as he hinted at NCAAs that he was likely done with swimming. He did not race at U.S. International Team Trials in April, then he scratched his only event–the 100 breast–at U.S. Summer Nationals. Regardless, retaining Whitley for his fifth-year is big for the Cal Golden Bears, who are graduating a lot of points thanks to a strong fifth-year group.

This year, Cal junior Liam Bell and Whitley finished third and fourth in the 100 breaststroke at NCAAs, respectively. With Whitley and Bell both returning, they’ll make a strong breaststroke 1-2 punch for the Bears as they attempt to defend their national title.

The biggest difference between this season’s fifth years and future season’s is the scholarship cap. In the 2021-2022 season, 5th year seniors didn’t count toward that cap unless they transferred. Starting in the 2022-2023 seasons, 5th year seniors will count against the cap, until the waiver expires.

Whitley graduated with a degree in Business Administration. He was named the 2022 PAC-12 Men’s Swimming & Diving Scholar-Athlete of the Year and was selected as a CoSIDA Academic All-American as a member of the men’s at-large second team.

Great to see him return. He’s a very intelligent man and fluent in a few languages plus a degree from Cal. Take full advantage of that’s 5th year and go with another one for the Bears!

If he learned how to pull water, he’d be 4x time champ

He’s 2 syllables away from being Reese Whiterspoon!

thrilled to have Reece back go bears

We all know Reece is going back to get his Master’s in Business Administration with the help of swimming scholarship as it should be. It is not his fault that elite swim coaches at Cal have not bothered to improve his technique which can look atrocious at times. He works hard at swimming and school. After this year if he still wanted the Olympics in the 200 breast, he should move to Indiana, Georgia Tech, U of MN, ASU or even Peter Andrew to get down the breaststroke technique.

You had me for a minute, there, Tina. Until the Peter Andrew for BR technique. Nice try…

More power to him! Life in the real world is long, and 20 years removed from college you realize it was a very short/quick time in your life. If he still enjoys swimming and competing at the highest level what is one more year?

The negative comments on this article are highly upsetting. Reece is a class act. He didn’t have the results he wanted at Trials last summer, and we ran into him in the parking lot one night and he still couldn’t have been nicer to the little girls in our party, taking pictures (as you can imagine, he is an absolute GIANT next to them). My favorite part of the photo is his mom is in the background with the biggest smile on her face about it all. If he or his mom read this I’m sure they’ll remember! 🙂 can’t imagine the pressure he was under to perform over the years after the youth sports hype machine had its way… Read more »

I have pictures of Reece towering over my son. It has more to do with where they were on the podium. I timed Reece as an age grouper at GCIT. His foot slipped at the start, and he clipped his ankle on the edge of the pool. How he handled a painful and disappointing swim as a 12 year old has made me a fan ever since. I’m banking on a monster 5th year if he wants it.

If Hugo returns too, they could repeat. Any news on his plans?

He’s been pretty quiet. I’m sure Ben Titley has been working him to come home to Spain, so he’ll have that option as well.

I’d love to see Hugo do it like Bryce Mefford did where he rejoins the team in the winter. If it’s possible and within the rules, I’d also love to see the Magic Man pull a Matt Sates and enroll at Cal for only like 6 weeks in the spring before turning pro again after NCAAs.

Hugo started his undergrad in 2017. I would guess he’s probably ready to move on.