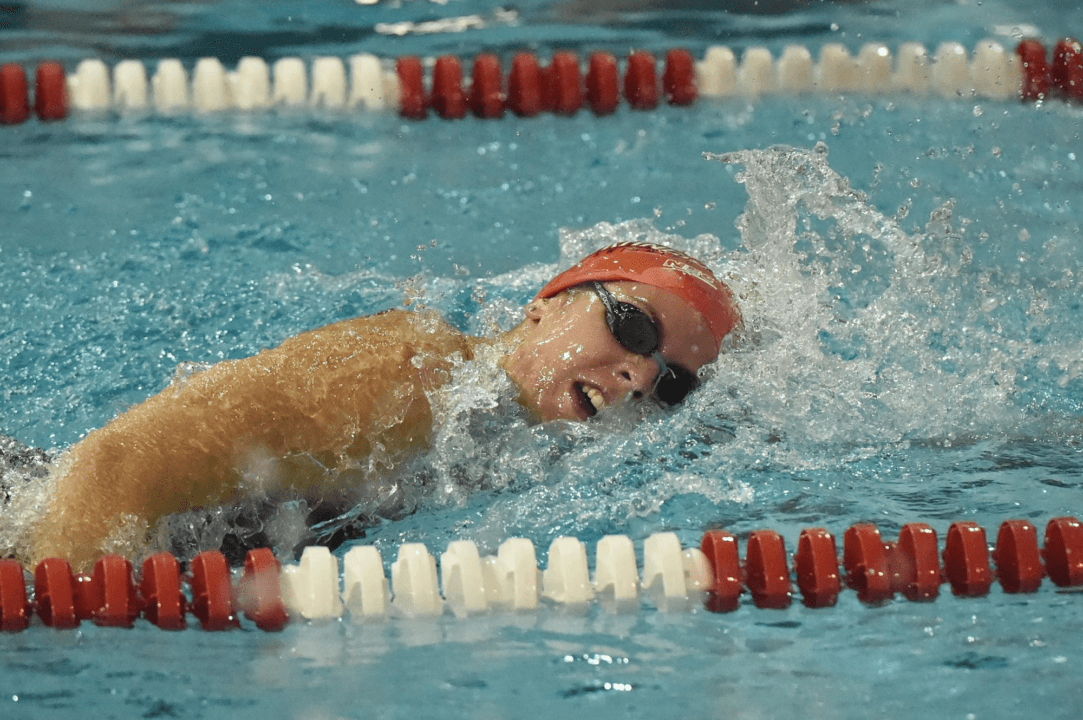 At a midweek home meet, the Saint Francis Red Flash swim team won a decisive win over the Vulcans of California University of Pennsylvania by the score of 154-72. Current photo via Saint Francis Athletics

LORETTO, Pa. – At a midweek home meet, the Red Flash swim team won a decisive win over the Vulcans of California University of Pennsylvania by the score of 154-72. The Red Flash are now 7-3.

Almoney’s Angle
“It was a good meet. We swam well but we are also tired. We take the extended break to rest up for the Magnus Cup.”

Erin O’Neill (Lansdale, Pa./North Penn) earned the win in the 100 Breaststroke by touching the wall in 1:08.52 minutes.

Annabelle McCullough (Mercersburg, PA./James Buchanan High School) finished second (59.66) in the 100 Butterfly. She missed out on first by 0.20 of a second.

The 200 Freestyle witnessed a thrilling finish as Kristen Toth (Silver Spring, Md./St. Vincent Pallotti), by the thinnest of margins, edged teammate Julia Bradford (Edinboro, Pa./Villa Maria Academy ) by 0.04 of a second for gold. Toth had a time of 2:00.92.

O’Neill earned her second win of the event by swimming the 50 Freestyle in 25.52.

Amelia Laudenbach (Kambah, Australia/Trinity Christian School) picked the win in the 200 Backstroke with a time of 2:08.91.

Mackenzie Lawson (Charlottesville, Va./The Covenant School) won the 200 Breaststroke with a time of 2:31.65.

Up Next
The Red Flash return to action on November 16 at the Magnus Cup hosted by Cleveland State.

With the loss, the California University of Pennsylvania swimming team falls to 4-2 this season in dual meets. Meanwhile, the Red Flash improve to 7-3 overall while competing in their second dual meet in four days.

Senior Kira Goin (Pointe-Claire, Quebec/Dawson College) posted a pair of victories on Wednesday, while reaching the league standard in both events. She recorded the win in the 100 butterfly with a time of 59.46 seconds to win the event by two-tenths of second and hit the league-qualifying mark. Goin also registered a victory in the 200 butterfly by nearly eight seconds with a time of 2 minutes, 9.73 seconds and improved her PSAC-qualifying time by over 4.5 seconds.

Fellow senior Danielle de Perrot (Lititz, Pa./Warwick) collected the win in the 200 breaststroke and qualified for the PSAC Championships after touching the wall in 2:33.18, while making her first appearance in the event this season. She also hit the league-qualifying mark in the 50 freestyle with a time of 25.85 to finish third and missed her top time by just six-hundredths of a second.

Freshman Kelsie Drennen (Fairmont, W.Va./Fairmont Senior) posted two PSAC qualifying times at the Strokes Natatorium. She recorded a third-place finish in the 100 backstroke and hit the league standard with a time of 1:02:03, which missed her top time of the year by just under two seconds. Drennen also notched a second-place performance in the 200 backstroke and hit the league-qualifying mark after touching the wall in 2:12.05.

Junior Karley Owens (Latrobe, Pa./Greater Latrobe) finished in second place and improved her PSAC qualifying time in the 200 IM with a mark of 2:16.95, which is just over 1.3 seconds faster than her original top time this season.

The Vulcans return to action next weekend when they compete at the Magnus Cup hosted by Cleveland State from Nov. 16-18.