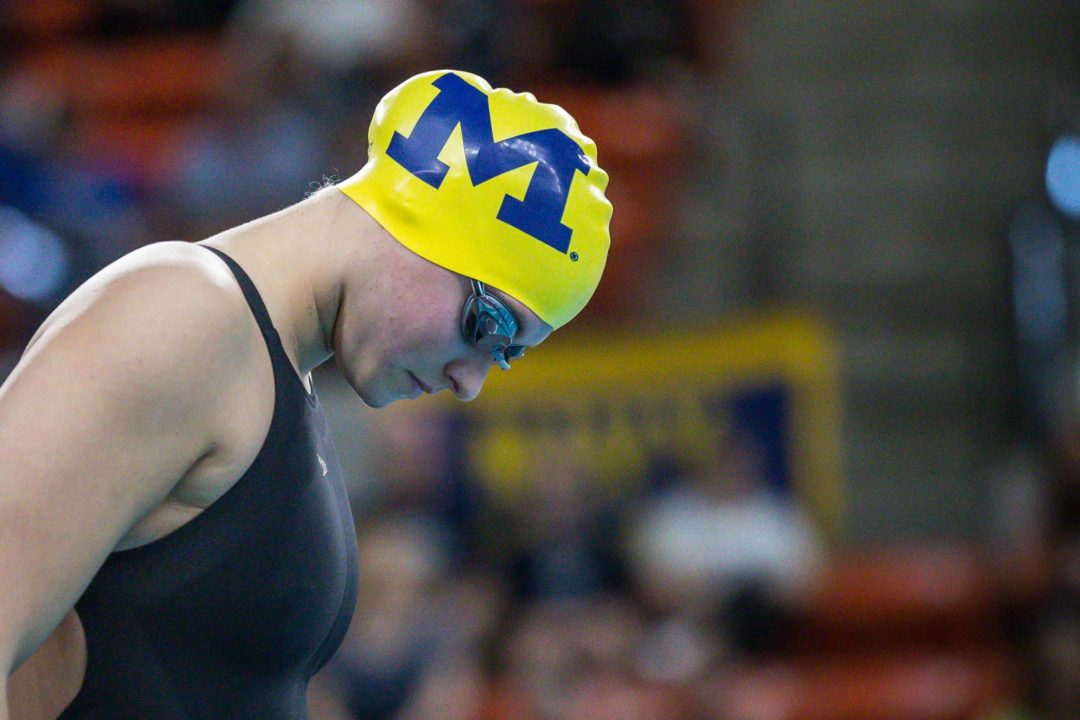 Since Pyshnenko was scratched more than 24 hours after she was invited, per this year's COVID-influenced '24 hour rule,' no alternate gets called up. Current photo via Jack Spitser/Spitser Photography

Update – Unrelated to Pyshnenko’s scratch, Georgia’s Sloane Reinstein was actually already invited as an alternate when Florida scratched freshman Madison Kolessar (#38 seed, 1650 free) to make room for diving qualifiers. Since Pyshnenko was scratched more than 24 hours after she was invited, per this year’s COVID-influenced ’24 hour rule,’ no alternate gets called up.

Georgia freshman Sloane Reinstein comes in with the #42 seed in the 200 free (1:46.26) thanks to the Kolessar scratch. Reinstein’s swim came at the 2021 SEC Championships, and she swam the event three times at UGA’s last chance meet to improve her ranking, hitting 1:46s three times but not beating her SEC time. She’ll still get to go to NCAAs now, though, with that SEC time.

Reinstein wasn’t on Georgia’s 800 free relay at SECs, but she’s the team’s #4 200 freestyler individually (two swimmers on their SEC relay haven’t swum the event individually this season), so she might have relay duty, too.

This is the third scratch for the women’s meet. First, NC State’s Heather MacCausland scratched the meet, which meant Nevada’s Donna Depolo got the invite to the meet. Then, USC’s Anicka Delgado gave up her spot to focus on the South American Championships, where she’ll represent Ecuador and try to earn a spot on their Olympic team. Delgado’s scratch brought Mizzou’s Kayla Jones into the meet.

This year, per COVID-19 challenges, the NCAA announced a special rule: scratches made more than 24 hours after the public announcement of being invited won’t be replaced with alternates.

>This year, per COVID-19 challenges, the NCAA announced a special rule: scratches made more than 24 hours after the public announcement of being invited won’t be replaced with alternates.
I don’t understand how this will help with respect to COVID.

such an arbitrary rule thats serving 0 purpose lol. really sucks for the alternate

If there is a purpose, I don’t understand it. And my comment isn’t meant as some kind of shade thrown on valid COVID-mitigation measures such as mask wearing, limited capacities, etc. If the notion is to limit the number of participants, changing the number of initial invitations would have been a lot more straightforward. Instead, this seems like a needless taunt to a swimmer: “Hey, you could have been included a couple of days ago but now you’re not. Sucks to be you. – NCAA”.

My understanding is that the purpose of this is primarily logistical. They don’t want swimmers showing up at the venue and hanging around waiting for COVID positives – which will inevitably happen.

Thinking more broadly, the same rules have been applied to all sports. Think NCAA basketball tournament, for example, and the logistical challenges behind scrambling a whole new team and all of the support staff that goes with that into the tournament at the last minute.

I do think they could have adjusted this per sport and still met the intent of the rule. For example, in swimming & diving they could’ve said, say, Saturday before. BUT, that still wouldn’t have stopped the Michigan coaches from waiting until Sunday… Read more »

Thank you for your thoughtful reply. I’ll confess I didn’t consider swimmers hanging around waiting for positive COVID tests. Do schools even have that kind of travel budget anyway?
My concern wasn’t for the scoring potential of an alternate. I agree that is not likely. I was more thinking about how a senior who might not come from a powerhouse swimming school will miss the entire championship experience and never get that chance again.

I’m not sure the NCAA timing on this is fair to the swimmers on the alternate list. While most teams don’t max out their roster, Texas does. But I don’t believe their divers have competed in the qualifying rounds yet? So when they see the results and decide to make room for the divers by scratching out swimmers, the alternate call up window will be closed. That happens in less than an hour from now I believe? Maybe the call up window should be open until 24 hours after the zone diving competition is over? There are 2-4 swimmers from the alternate list that could be called up but for the 24 hour rule.

So what we’ve learned from the women’s meet is that if you’re scratching because of qualifying divers, you can still do that after the 24 hours. A swimmer scratched not because of divers will result in an alternate being called up.

So, the women’s scratch was because florida scratched a swimmer after qualifying 2 divers. The Michigan swimmer was scratched after the 24 hours and she wasn’t replaced.

So let’s say that Texas scratches a swimmer for 2 divers once their zones is done. Well a guy get called up even though it is past 24 hours?

Based on the best current available information, yes.

In conversations, most D1 coaches I’ve spoken to in the last few days weren’t aware of this difference. The NCAA rarely responds to requests to clarify rules, so unfortunately it seems like this is a case of “dissemination by evidence.”

Unfortunate for whoever the next alternate is that Pyshnenko waited longer than the 24-hour deadline to scratch, considering she knew right after Big 10’s that she wasn’t going to swim.

Perhaps is was university at fault, and not Pyshnenko? I do not have first hand knowledge how the scratches process work but I do not think individual swimmers file scratches with NCCA?

It sure seems the university is at fault. I’m struggling to understand why the Michigan coaching staff waited long enough to ensure that an alternate wasn’t called up, denying another swimmer the chance of a lifetime. Wish I could think of a good reason why but I can’t. If you can let me know.

maybe they were hoping she might change her mind…?

Nah, probably ran the names and numbers and maybe thought the person next in line would have done some damage to Michigan points wise. It is all speculation anyway.

I mean how much damage can a 40+ seed do points wise? It’d be huge for them to make even the B final

27
0
Reply
Another Tomek
Reply to  Tomek

3
0
Reply
Tomek
Reply to  Another Tomek

where are you from Another Tomek? I’m in central Texas.

Agree. Don’t know her issue and truly hoping its not serious. Its been a tough year for all and extra tough for Michigan with the loss of a swimmer and shutdown for 3 weeks. Just can’t fathom all that work and not going..but i was never in that situation. I just hope she doesn’t regret it some day. I doubt years later that most would not regret they went. But i think there is a possibility of regret they didn’t go.

Donna Depolo is from Nevada, Not UNLV

I’m so excited for Sloane! Grit, resilience, and hard work pays off every time. Best of luck to her at NC’s.

that must be exciting