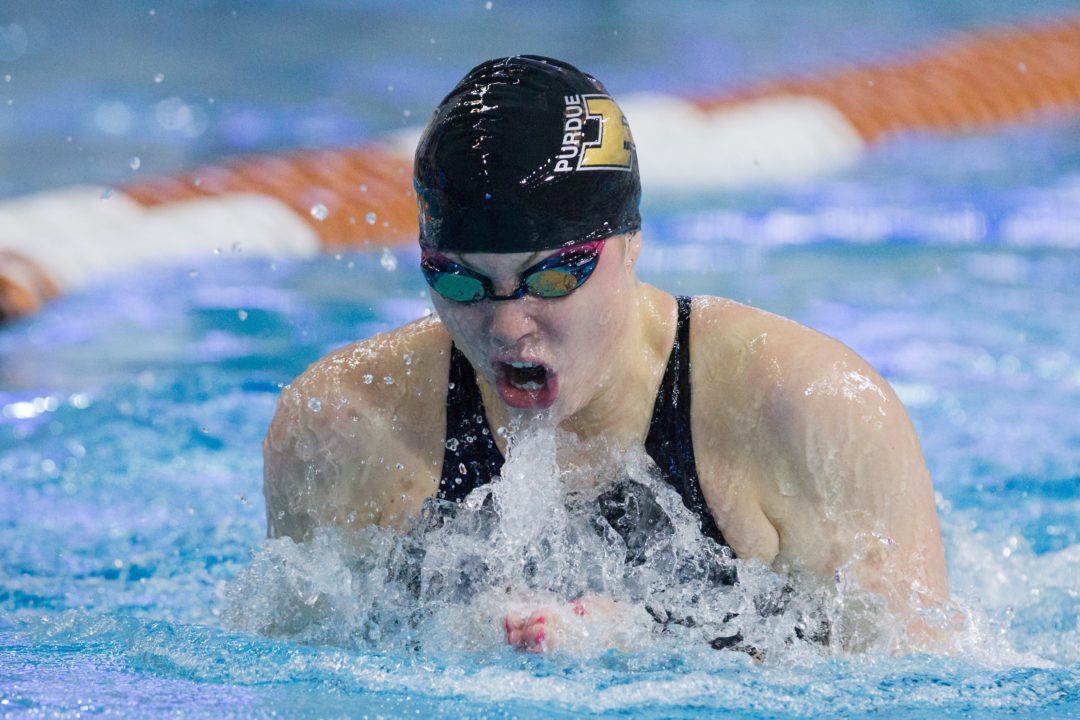 A strong Saturday morning for the Purdue women and Buckeye men have those teams in good shape to protect their leads at tonight's finals of the Ohio State Swimming and Diving Invitational. Archive photo via Tim Binning/TheSwimPictures.com

A strong Saturday morning for the Purdue women and Buckeye men have those teams in good shape to protect their leads at tonight’s finals of the Ohio State Swimming and Diving Invitational. Kentucky and Wisconsin, however, put in performances Saturday morning that could threaten Purdue’s and Ohio State’s leads in the standings, when the finals start at 6 p.m. EST at the Bill & Mae McCorkle Aquatic Pavilion in Columbus, Ohio.

Going into the finals, the host Buckeyes (437.5) have a healthy lead over Wisconsin (249) in the men’s competition, and Purdue (291.5) is leading the women’s competition with Kentucky (266) and Wisconsin (235) in striking distance. See full standings below the prelim recaps.

It’s a 2 p.m. Saturday start for the diving prelims, which features the men’s 3-meter and women’s 1-meter events. The diving finals start at 8 p.m.

Kentucky’s Danielle Galyer is the top qualifier in the women’s 400-yard IM (4:14.83), dropping nearly nine seconds off her seed time to get an NCAA ‘B’ cut. Purdue’s Nika Karlina Petric (4:16.17) also had a nice five second drop off her seed time to qualify second. Kentucky, Purdue, Ohio State, and Wisconsin are all putting two women into the A Final to fight for valuable team points.

No surprise here as Kentucky’s Christina Bechtel qualifies first in the 100-yard fly (51.44) with an NCAA ‘A’ cut and by a gap of nearly two seconds over teammate Abby Myers (53.13). Wisconsin’s Ivy Martin (53.32) qualifies third in front of Purdue’s Kylie Vogel (53.77), who put three women into Saturday’s A Final. Rhiannon Sheets (54.44), Alex Todd (54.46) and Meagan Lim (54.59) join Vogel, which will help Purdue with their effort to keep or extend their lead over Kentucky in the women’s standings. Joining Martin in the A Final for the Badgers is Dana Grindall (54.16), who qualified fifth.

Ohio State’s Matt McHugh breaks the run of top qualifiers for the Wildcats with the top time and NCAA ‘B’ cut in the men’s 100-yard fly (47.49). Kentucky’s Kyle Higgins qualified second (48.12, also an NCAA ‘B’ cut) with a 1.61 second drop from his seed time. Wisconsin puts four into the A Final Saturday night with Drew Teduits and Austin Byrd, who both clocked 49.40 for the third fastest qualifying times, plus Harrison Tran (49.56) and Ryan O’Donnell (49.94). Peter Lyon (49.47) and Steven Zimmerman (49.69) join McHugh for a trio of Buckeyes in the A Final.

Going into the A Final, Purdue is represented by three, the Wildcats and Wisconsin with two, and Ohio State with one, which could impact the overall standings between the meet’s top four women’s teams.

Wisconsin’s Nick Schafer will have the unattached Keanu Stevenson to keep him company in the Men’s 100-yard breast A Final Saturday night, which features six Buckeyes, led by DJ Macdonald, who qualified second (54.33).

Schafer’s 54.30 qualifying time is 1.42 seconds off his seed time. He is the only one of the top six qualifiers who did not drop his seed time. Look for Schafer to turn it on Saturday night with a convincing win.

Look for Teduits, who was more than two seconds slower than his seed time, to challenge the Buckeye men in Saturday night’s A Final, which features four Buckeyes, three Badgers and one Wildcat. It’s a good mix that could push any team up or down in the team standings.

Going into tonight’s finals, which start at 6:30 p.m. EST, the full team standings (after Friday night’s results) are:

MacDonald 5th @Nationals this past Summer in the 100M Br. But does not have a chance to win the event at finals tonight ???