Smith And Messerschmidt Open Up UGA Invitational With Hot Times 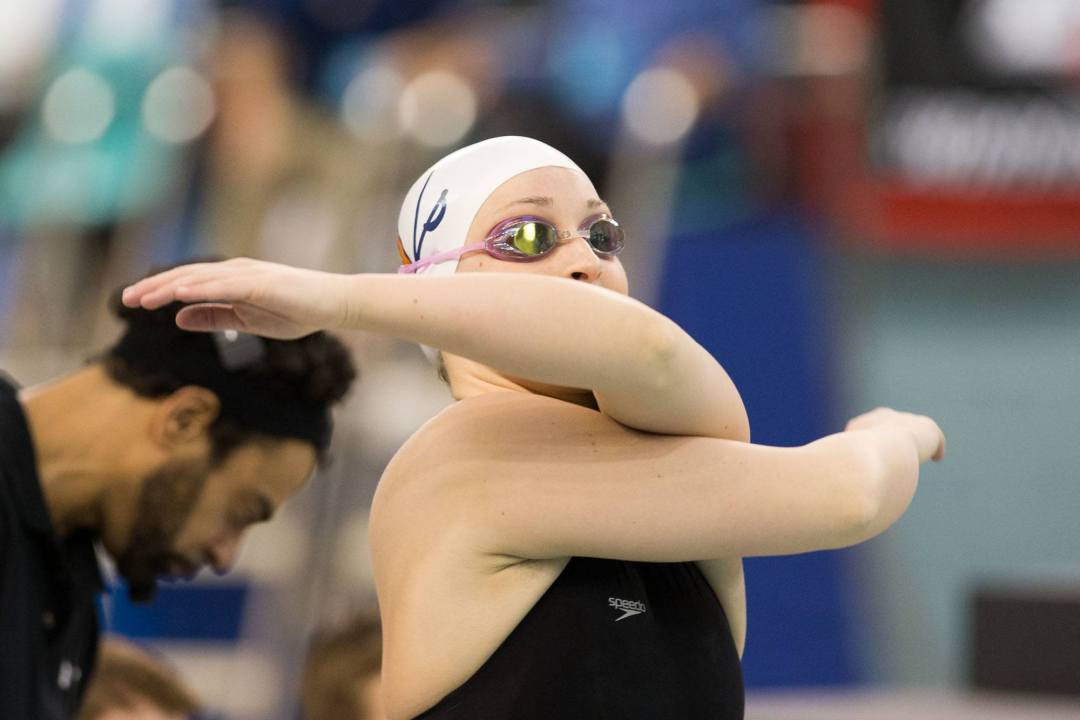 Virginia's Leah Smith is on a mission in Athens, Georgia this weekend, it would appear. Archive photo via Tim Binning/TheSwimPictures.com

Smith Bests Her Own School Record In 500-Yard Free

University of Virginia’s sophomore Leah Smith is the top qualifier for tonights 500-yard free final with a very fast 4:32.61, which is a 13 second drop from her season best time and erases her own school record (4:33.65) by 1.04 seconds.

Cal’s Cierra Runge was the second top qualifier at nearly five seconds back (4:37.06), while host Georgia senior Amber McDermott, who finished third at last year’s NCAA Championships in this event, qualified third (4:39.34). She was followed by teammates Brittany MacLean (4:40.68) and Hali Flickinger (4:41.45). The top 23 finishers all dropped time from their seed entries.

The top three qualifiers in the men’s 500-yard free were all Bulldogs, as freshman Kevin Litherland (4:17.75) dropped ten seconds from his seed time to post a NCAA ‘B’ cut. Teammates Jay Litherland (4:19.24) and junior Matias Koski (4:19.92) were the second and third top qualifiers, also with NCAA ‘B’ cuts. The top 11 qualifiers achieved NCAA ‘B’ cuts and qualified with season-best times.

Friday night’s A Final will feature five Bulldogs, three of which are bothers, as freshman Mick Litherland (4:21.94 ) and Alec Cohen (4:22.33) qualified sixth and seventh.

Watch the middle four lanes of the women’s A Final Friday night, as only 0.70 seconds separated the top four qualifiers in the 200-yard IM prelims. Courtney Bartholomew (1:55.23) and Kaitlyn Jones (1:55.61) qualified one and two for Virginia, while Cal’s Missy Franklin (1:55.92) qualified third and Virginia’s Ellen Williamson (1:55.93), who is the third of four Virginia swimmers to qualify for the A Final, qualifies fourth. The top 21 qualifiers all achieved NCAA ‘B’ cuts.

For the men’s 200-yard IM, it’s an all Georgia and Cal A-Final, as each team has four swimmers competing Friday night. The Bulldogs have the top three qualifiers Chase Kalisz (1:43.56), Tynan Stewart (1:43.75) and Gunnar Bentz (1:43.85). Jay Litherland (1:46.31), who made a quick turn-around after qualifying second in the 500-yard free, qualified seventh to be the fourth Georgia man in the A Final.

Cal qualified four men in the A-Final with the fourth, fifth, sixth and eighth qualifiers. Will Hamilton (1:44.21), who dropped four seconds from his seed time, was the top qualifier for Cal. The top twenty-men qualified with NCAA ‘B’ cuts.

The top eight qualifiers in the women’s 50-yard free were all under 22.50 and within 0.47 seconds of each other. Host Georgia’s Chantal Van Landeghem led the way with season best time by 0.68 seconds to qualify first with a 22.03. A tenth of a second back was Cal’s Farida Osman (22.13) and Virginia’s Ellen Thomas (22.14), who qualified fourth earlier in the 200-yard IM A Final, put up the third fasted qualifying time, 0.01 behind Osman.

Gunnar is still 18, so he could conceivably give Nolan’s 200 I.M record a run, depending on how much he saved for finals. Should be a great race regardless. Look for Kalisz, Bentz, Stewart, and Hamilton to all break 1:43.

I’m predicting at least one 1:41 from the group. Lots of exciting fast swimming this weekend!

Leah Smith’s time was also the 2nd fastest ever in the NCAA and less than a tenth of a second off of the NCAA record, I believe.

She should flirt with 4:29 tonite and easily dispose of the NCAA record. Definitely one of the rapidly improving names in the world for 200m & 400m. Timing is perfect to be a player in Rio not just in relays but to get to podium individually.

its too bad, shes up against the greatest female swimmer of all time.

And, 2nd is just as good as first when it comes to Olympic Trials… Although, after that 2nd isn’t quite as good.

On a similar note, doesn’t that swim make her the 3rd or 4th fastest performer of all time? That swim was easily the best and most impressive swim in this young NCAA season. UVA women were on fire this morning!

I believe it makes her 3rd all time behind Ledecky and Knutson who did swim 4:31.

If that’s true, then she would be the 4th fastest ever, but 3rd fastest American ever. MacLean still has the NCAA record. It should go Ledeckey, Knutson, MacLean then Smith… but where does Evans fall into the mix?