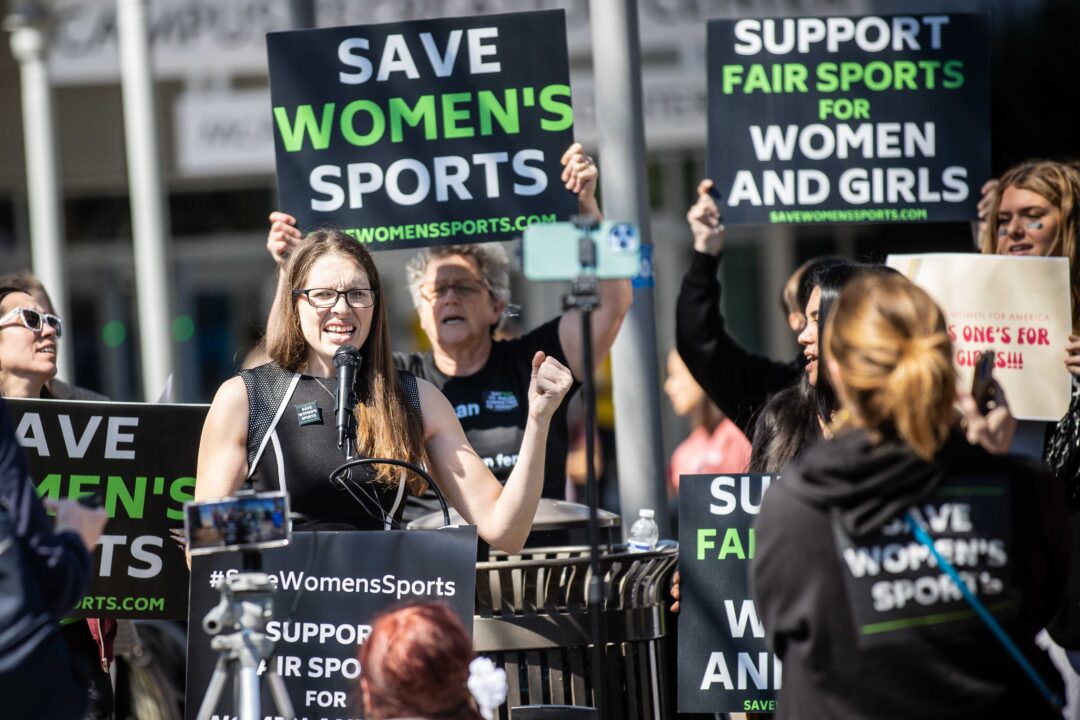 Protestors who identified themselves as “Save Women’s Sports” gathered outside of the facility as Lia Thomas competed in her first event of the meet. Current photo via Jack Spitser/Spitser Photography

During the Day 2 prelims session of the NCAA Women’s Swimming and Diving Championship, protestors who identified themselves as “Save Women’s Sports” gathered outside of the facility and attended the meet as Lia Thomas competed in her first event, the 500 freestyle. Prior to Thomas’s race, I spoke with protestors outside of the McAuley Aquatic Center at Georgia Tech.

The protestors represent “Save Women’s Sports,” which per their informational brochure states, “We are a coalition fighting to preserve sex-based eligibility for female sports.” The group of about 10 women held signs that read “Save Women’s Sports” and “Support Fair Sports for Women and Girls.” The group was also passing out informational brochures to people outside of the aquatics center.

The women that I spoke to, Amy Sousa, Jeanna Hoch, Jennifer Krohn, and Mary Higgins, traveled to Atlanta from the West Coast to protest this swim meet. None of the women have a swimming background. Most representatives from “Save Women’s Sports” self-funded their attendance. At the time of my interview, there were 10 representatives from “Save Women’s Sports” outside of the aquatics center.

Thomas has complied to the NCAA transgender athlete policy, which allows trans women to compete on a women’s team if they’ve completed a minimum of one year of testosterone suppression treatment, and Thomas has been undergoing treatment for the last two and a half years.

The four women I spoke to directly constantly misgendered Thomas throughout the interview.

I asked the women about the use of testosterone suppression regulations for transgender athletes to compete with biologial women. “Women are not a testosterone level,” says Sousa. “We are fully embodied whole human beings right down to our skeletal structure, our heart capacity, and our lung capacity.”

“I know a man when I see one,” says Hoch. “I’m here to protest men in women’s sports and to protest female erasure.”

Thomas is staying at the same hotel as Hoch. The protestor did not speak to Thomas as she was asked by “Save Women’s Sports” founder, Beth Stelzer to maintain her composure and be professional. “[She] is massive. It’s not fair. We did not fight for women’s sports to include men and boys with an identity crisis,” says Hoch.

I asked Hoch about female elite swimmers like Katie Ledecky who is 6’0’ tall, and Missy Franklin who is 6’2” tall, who also often tower over competitors, and if that is considered an unfair advantage. “What does big females have to do with being male?,” asks Hoch. “Why would you compare a woman to women? We don’t have a problem with height, we have a problem with sex.”

The Thursday morning session featured the 500 freestyle, which is University of Pennsylvania transgender swimmer Lia Thomas’s first race at the meet. Thomas swam in the final heat of prelims, winning the heat and posting the best time of the morning (4:33.82), which is .24 seconds faster than her seed time.

As Thomas stepped on the blocks, someone in McAuley Aquatic Center shouted “cheater.” Thomas finished four-seconds ahead of Brooke Forde (4:38.19), who was 2nd in the heat. There was a noticeably louder clap for Forde when she finished, as opposed to when Thomas touched the wall, winning the heat. Forde posted the 6th fastest time of the morning and will race Thomas again in the A-final. After finishing, Forde reached over the lane line and shook hands with Thomas post-race.

USA Swimming’s new policy requires evidence that the athlete has maintained a testosterone level less than 5 nmol/L for a minimum period of 36 months, and has a second piece of criteria that states there needs to be evidence proving the athlete’s prior physical development as a male does not give them a competitive advantage.

USA Swimming changed its policy surrounding transgender athletes on February 1. On February 10, the NCAA announced that the organization would not adopt USA Swimming’s new policy prior to the NCAA Swimming and Diving Championships. Per the old policy, which applies at this meet, trans women are allowed to compete in the women’s division as long as they had a testosterone level of 10 nmol/L or less.

We are in very dangerous territory as a society. A farce wrapped in self righteousness that viciously attacks dissenting opinions. It’s all nausea inducing. Kafka meets Orwell.

Don’t have to cover these clowns

I cant wait for this to take the world stage where other countries arent as worried about being politically correct will shoot it down. Its such an obvious and scientifically proven advantage that I cant believe people are letting their fear or being canceled sway their views his drastically. its like taking crazy pills. I feel bad for her because she just wants to continuing pursuing the sport, but this is provenly unfair for biologic women

The way I see it, Lia could have truly been the Jackie Robinson of transgender swimmers if she had chosen to be part of the solution instead of part of the problem. She could have recognized that even after the prescribed hormone therapy, she is a much better female swimmer than she ever was as a male swimmer. Much, MUCH better. She could have said “I’m good, I work hard, but I’m not the best swimmer in the country. I’ll maintain my right to participate, but I don’t want to be unfair to my competitors, so I’ll swim exhibition, and continue participating in the discussion to figure out a fair solution.” And she could have been forever known as the… Read more »

So Jackie Robinson played exhibition? I guessed I missed that part of history

If JR had played on a woman’s softball team your post would make sense.

The fact that none of these folks have a sports background shows it isn’t really about sports at all. It’s about something missing in their own lives.

Obviously people are 50/50 mixed on which side you stand on, so please just state it and be obvious so we can either support you or condemn you

Maybe, maybe not. But what’s wrong with their basic argument? Your post leaves us wanting.

I really hope that Lia has a strong support system around her. I worry about her mental health and the toll all this unwanted attention must be taking on her. I cannot imagine facing this kind of scrutiny, especially as a university student. I just hope that she is doing alright. ❤️

Why do you think we should worry about her mental health? Have you seen any sign of this coming? What does SHE think about this? Maybe she likes this publicity and noise around her. Maybe her life was boring and dull before and now she is the worldwide sensation. Are there any interviews with her where I can believe she is frankly?

Really? She’s probably gotten death threats, there’s a reason her social media is private. I’ve seen blatant threats and hate speech regarding her on many platforms – people have jumped at the chance to express it. Who would want that?

I am as well, because some of the death threats toward her have wound up in my inboxes.

Very deserving of them

That is exactly my point. What is she trying to prove or to stand for by taking part in this competition. Why is it so important to her? I’m sure she changed her gender not for the purpose to compete in NCAA on the women’s side. Then leave it. You have more important and more difficult task to accomplish. And nobody would take it like a defeat of the person who feels herself lesser than others.
I personally wouldn’t do it. But that is my nature: to avoid problems. What is she doing it for? She knows the controversy about physical advantages in sport. Boxers and weightlifters are separated in groups of different physical abilities trying to avoid this… Read more »

I hope all the other swimmers have a very strong support system around them. To have trained most of their lives in swim and to have their hopes and dreams taken away from them must be devastating.

I worry about the mental health of Emma Weyant and the girl who finished 9th and 17th. These cisgendered girls who have trained hard for this race for many years were beaten by a person who competed as a male with full male secondary sex traits and physiology for 22 years! I seriously wouldn’t be able to handle this if I were them. This is not fair and it’s an insult to Title Nine! Let the Transgender advocate and fight for their place in athletics just like the women had to!!!

Misgendering and other issues aside – If these people actually cared about women in sport or about the hundreds of elite athletes competing in Atlanta this week, they would not be turning this event – which is the fastest NCAA championship we’ve seen in 3 years – into a spectacle. I can only hope they are able to block it out and enjoy the experience/have a competetive meet regardless. But there has got to be affecting many of the athletes on some level. So much for saving women’s sports.

I totally understand where the good-faith members of the SwimSwam commentariat are coming from on this issue, but these whackos should not be your allies.

Allowing them to speak is not fair to them