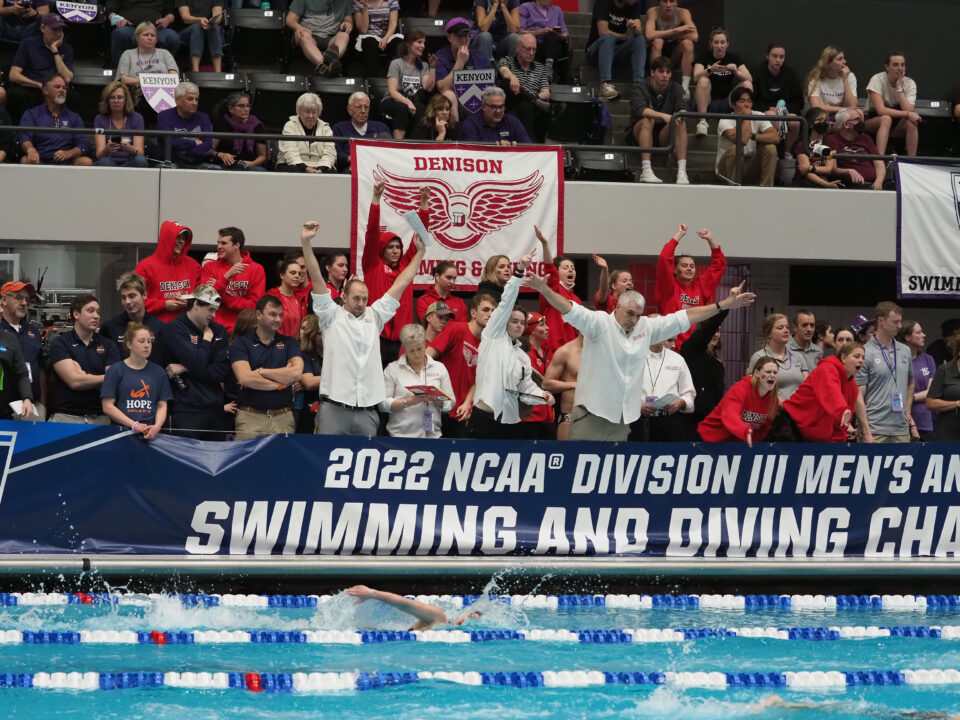 The Denison had a massive prelim showing, putting eight swims through to 'A' finals as they project to take over the team lead from Kenyon. Current photo via Denison Athletics / Linda Striggo

The Kenyon Ladies outperformed the swimming projections by 23 points and eked out a victory over Emory by 7 points.

Despite only having one invidiual title winner, the depth of the Emory men’s swim team led them to their second title in program history.

Wentzel’s record marks the third time she has taken down the 200 breast record, being the only woman in DIII history to be under 2:12 and 2:11 in the event.

The Division III 200 backstroke record was set twice today, once in prelims and once in finals. The record now stands at a 1:41.49.

The Kenyon women had a big win in last night’s 200 free relay to come out of Day 1 with a six-point lead on Denison, but the Big Red had a monster prelim session on Thursday by putting six swimmers and both relays through to ‘A’ finals.

If we score out Denison’s prelim finishes, not factoring in diving, the team is projected to score 149 swimming points in tonight’s finals, compared to Kenyon (125) and Emory (131). A notable gap over their two rivals, but not as big as it may look when comparing the number of ‘A’ final swims the teams have.

Kenyon holds a 12-point advantage in Denison in projected relay points, while Emory currently has Taylor Leone and Megan Jungers sitting 1-2 in the 100 fly which helps out their cause in a big way. If Dension could have its two swimmers in the 200 free ‘A’ final move up (currently fourth and sixth), it would go a long way as Kenyon and Emory had no swimmers advance through in that event.

A disqualification in the 200 medley relay yesterday for Kenyon has made it a battle between Emory and Denison atop the leaderboard on the men’s side for the time being, with Emory holding a six-point lead after the opening day of competition.

The Eagles had a very strong morning by putting 11 total swims into scoring position for tonight’s finals, including two men moving on to the championship heat of both the 400 IM and 200 free.

Emory is projected to score 139 swimming points tonight, and that total could jump up significantly since the team is only ranked seventh in the 400 medley but trails first-place Denison by just over three-tenths of a second (a 16-point swing).

The Big Red are only slotted in for 83 points tonight after failing to advance anyone into the final of the 100 fly or 200 free, while Kenyon doesn’t appear as though they can make a run up towards Emory after going 3/2.

Williams and MIT both had strong performances with four ‘A’ final swims, while Johns Hopkins went 3/5.

Pomona-Pitzer and Tufts both got disqualified in the 400 medley relay, bumping them out of ‘B’ final spots and moving in Trinity and Hope.

So, both Leone and Jungers are going to beat Heart tonight?

They have 2 swimmers who could score in more than one A final each, and a third seeded well in one event. No one else in significant striking distance and relays that have been embarrassing. No depth. Currently in the lowest scoring place since, what, 1975? The Lords have fallen.

They’re definitely nowhere near as dominant, but they still have 3 swimmers who could win national titles (Fitch, Fitzgerald, and Kosian) and a diver who has already won a title. Their 2 medley relay would have been top seed without the DQ and their 4 medley relay was second this morning, so I guess getting 9th by 0.02 is embarrassing?

Yes, it is. But the larger picture, not just the simple .02 that you’re trying to pigeonhole.

Prove me wrong. This will be the lowest scoring place they’ve had since the early/mid ‘70s.