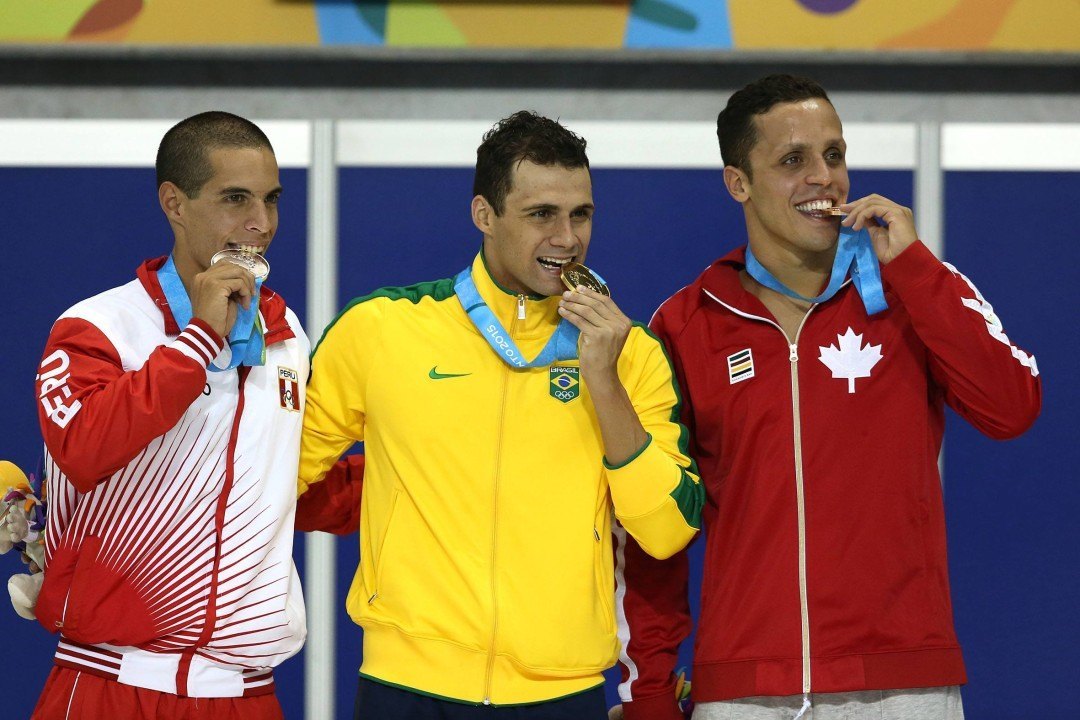 Fiol (left) tested positive for a banned substance at the 2015 Pan American Games, and was suspended for 4 years. Now, he has tested positive again. Archive photo via Satiro Sodre/SS Press

Just days before he was scheduled to make his return from a 2015 suspension for a failed doping test, Peruvian swimmer Mauricio Fiol has announced that he failed a 2nd doping test and will withdraw from the 2019 Pan American Games.

Fiol’s latest positive test is for the same substance that showed in the failed 2015 test: Stanozolol. The substance is classified by the World Anti-Doping Code as an Exogenous Anabolic Androgenic Steroid. The four-year suspension that he received for that failed test is the most that could have been awarded under the rules of that Code for a first offense. That suspension was handed out by the FINA Doping Panel, which ruled that there was insufficient evidence that the ingestion was accidental. That evidence would be necessary to reduce the suspension from the maximum 4 years, and the panel ruled that the burden of proof is on the athlete to provide evidence of accidental ingestion, and that lack of evidence of intentional doping is not sufficient to reduce the suspension.

Fiol says that he tested positive for banned substances in 2 of his last 4 FINA doping tests in the run up to the Pan American Games.

“My first responsibility is to publicize this information that has baffled me, since I have never consumed that substance.”

“I would be really disrespectful to my family and all the people who love me if I did it after all that I had to suffer these four years. I would have to be a self-destructive patient to get a substance for which I was already unfairly suspended.”

Fiol received a special waiver to compete for Peru at the Peruvian-hosted Pan American Games later this month in the 400 free relay, 800 free relay, and 400 medley relay. Fiol was disqualified after failing a positive test at the 2015 Pan American Games after he won a silver medal in the 200 fly – which he had to forfeit as a result of the suspension. The 25-year old, in spite of not having raced for Peru in 4 years, owns 6 Peruvian long course records individually.

The pool swimming portion of the 2019 Pan American Games will take place from August 6th-10th, while the open water race will be held on August 4th.

I do not know in what forms Stanozolol comes, is this something that could be in supplements, or could it be in meat (feed to animals and then be in the meat when humans consume them)?
I have no opinion regarding Fiol’s guilt or innocence but more curious how this substance can get in to someone’s blood (guessing it was in the blood it was found).

It’s been discontinued in most countries for human use. It’s still used occasionally in veterinary medicine, but not in animals meant for food. It’s used therapeutically in some companion animals (orally and by injection) and illegally in racehorses (by injection). To build muscle and decrease recovery times so horses can train harder and perform better (the same illicit use human athletes). Unless he’s been eating racehorses it seems unlikely…