Park Makes it 4 for 4 at Santa Clara 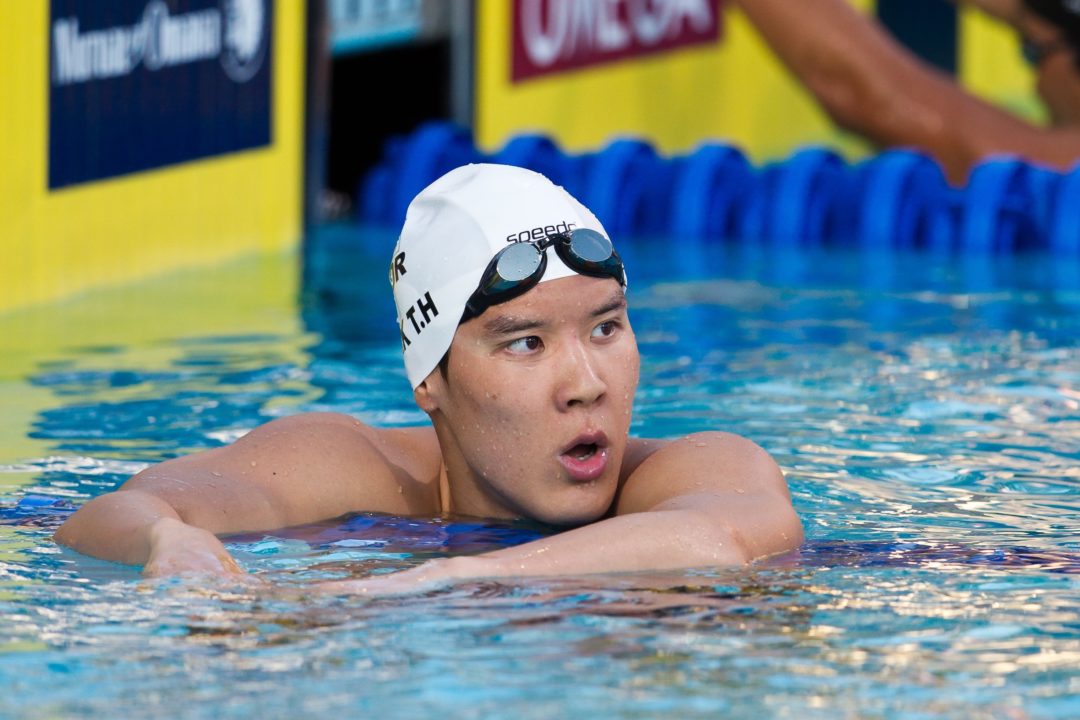 In one of the most anticipated matchups of the weekend, world record holder Stephanie Rice of Australia took the win over NCAA Swimmer of the Year Caitlin Leverenz of Cal in the Women’s 400 Individual Medley. Leverenz showed some surprising early speed, staying with Rice on the butterfly leg but the defending Olympic champion pulled away on the backstroke leg and that was the difference in the race. As expected, Leverenz made it close on the breaststroke but was unable to pass the Aussie on the final leg of freestyle as Rice finished with a winning time of 4:35.87 to Leverenz’s 4:37.13. Min Zhao of China finished 3rd in 4:40.67.

Bronte Barratt of Australia lowered her own meet record on her way to victory in the Women’s 200 Freestyle.  Dana Vollmer lead the field out at the half way mark with a :57.29 but Barrett came charging back on the third 50 to take the lead for good, finishing with a 1:57.17. Vollmer touched 2nd with a 1:57.25, and Hanae Ito of Japan touched 3rd with a 1:58.05.

It was a one-two finish for Australia in the Women’s 200 Backstroke, with Meagan Nay taking the win in 2:08.04, less than half a second off her 2:07.83 from Aussie Trials which still ranks third in the world this year. Her Australian teammate, Emily Seebohm 2nd finished with impressive 2:08.88 which puts her 12th in the world this year in the event.

Tyler Clary took his second win of the session with a 1:57.90 in the Men’s 200 Backstroke.  He appeared to build the first 50, before unleashing his top gear on the second quarter of the race with a half-way split of 57.80. Kazuki Watanabe of Japan touched 2nd stopping the clock at 1:59.56, and rounding out the top three was Austalia’s Ashley Dealaney who clocked a 2:00.14.

Australia’s 16 year old sprint specialist Yolane Kukla took the win in the Women’s 50 Freestle with a 24.97, out touching SwimMAC’s Madison Kennedy who touched in 25.05 for 2nd place, while Libby Tricket of Australia finished 3rd in 25.22.

It was a California Aquatics 1-2 finish in the Men’s 50 Freestyle with Anthony Ervin taking the win in 22.35 in front of his teammate Will Copeland who touched 2nd in a 22.74. Takuro Fujii finished 3rd in 22.86.

It is clear now that Leverenz won’t be able to rely solely on her amazing breaststroke: she did take almost all of the difference from Rice, but it took a toll on her. If she manages to keep pace at the half way point, then she will stand a better chance. I think I heard the announcer say Park’s reaction time was .44 secs! If it were the 50 dash! His turns were much better for this 200m. He had no one to push him, so I think he kinda shut down a tad.. Clary’s 400 IM was won entirely on his fly/back legs: he had too much of a cushion: no one was gonna catch him. I can’t wait… Read more »

Which WR will Clary break in Omaha?