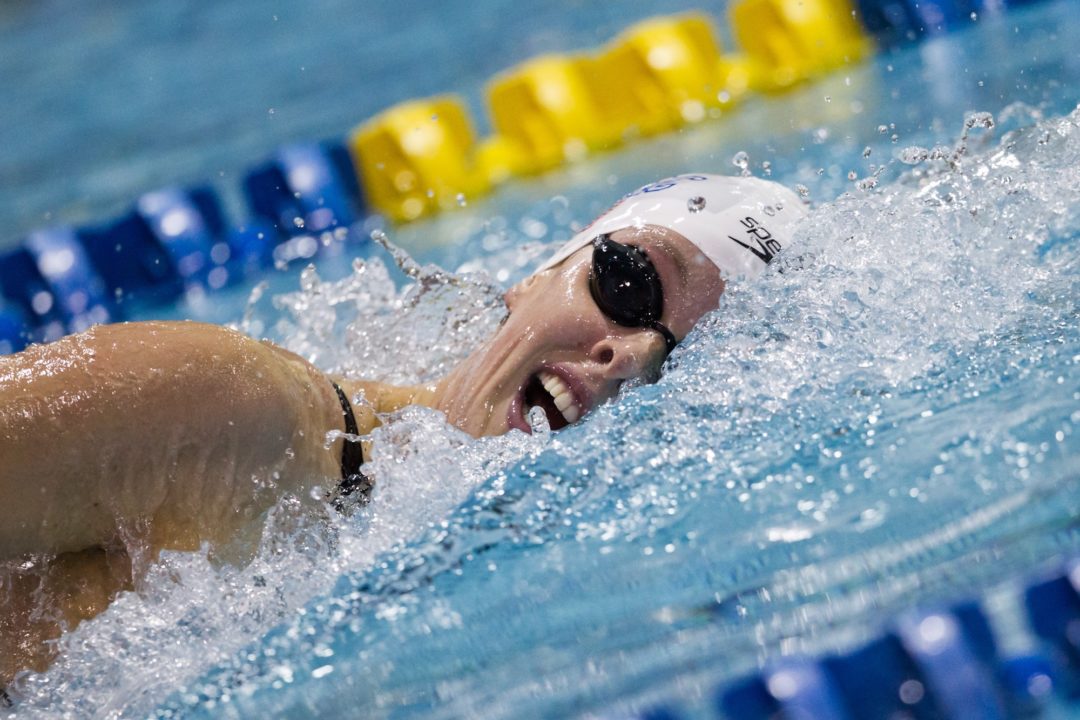 Allison Schmitt rocked her second US Open Record of 2012 in the 200 free in Austin (Photo Courtesy: ©Tim Binning/TheSwimPictures.com)

The results of the Austin Grand Prix through two nights of swimming will leave swim fans in one of two camps – either loaded with anticipation, or terrified at what’s happening. That’s because swimmers are dropping best times, huge in-season best times, textile best times, and all around just unusually fast swimming for where they are in their training – still 18 days out from Trials.

For the second-straight night, Allison Schmitt dropped a bomb in finals with a 1:55.04 in the women’s 200 free. That’s a new U.S. Open Record as the fastest swim on American soil ever. That’s the second time in the last 6 months that she’s broken the U.S. Open Record in this same pool, after a 1:55.8 in January at the Austin Grand Prix.

She took a big lead on the first 100, going out in 55.97 – given where she was a year ago, it’s shocking that she was able to hold on so well on the back-half to plant the 8th-best time in history; a year ago, a 55.9 wouldn’t have been a bad 100 free time this time of year. This is turning out to be perhaps the best meet of Schmitt’s career, with a best time in the 100 and a personal textile-best in the 200. This is aside from the 400 free; she scratched that race on Friday as she was given the option to swim that or the 100.

Nobody else was in her same stratosphere for the entirety of this race, and with that time from Schmitt and the expectations of Franklin, the American women have a legitimate shot at taking down the World Record in the 800 free relay.

As for Franklin, she took 2nd in 1:57.91. This meet has very closely paralleled her speed from this same pool in January; this 200 time was within a tenth of what she swam at the Grand Prix, the 100 free was about three-tenths slower, and her 200 back was about seven-tenths slower later in the Saturday session. Her performances are becoming very predictable, and I think that’s a good thing for her and her coach Todd Schmitz; predictable results help coaches really pinpoint tapers.

Longhorn Aquatics’ Kathleen Hersey was 4th in 1:59.64, a tough third 50 did her in from what looked like it could be a very good time for her.

There were a few good swims in the lower finals of this race as well, specifically Karlee Bispo winning the B-Final in 2:00.01 and Megan Romano taking the C-Final in a huge personal best of 1:58.29. Had it not been for a stumble in prelims, that time would have put her 3rd in the A-Final.

Prior to Schmitt’s explosive 200, Texas A&M swimmer Cammile Adams won the women’s 400 IM in 4:38.27 – which is a personal best for her. She’s another swimmer who has been very good twice in this pool. Despite being best-known for her skill in the 200 fly, she continues to have a ton of success in this 400 IM – it’s the event that put her on the National Team last summer.

A whole lot of top-8 swimmer scratched this final, including Wendy Trott and Melanie Margalis. Cammile’s twin-sister Ashley won the B-Final in 4:55.10, which is a lifetime best for her and an Olympic Trials cut.

Michael Phelps put up one of the easiest 4:15 400 IM’s you’ll see with a 4:15.88 win at this meet; but he still looked pretty tired coming out of the altitude. Bob Bowman after the race sounded not upset over the time, but he did describe Phelps as “not so good” when juxtaposed against his North Baltimore teammates, many of whom are crushing their swims at this meet.

Among those swimming well are Phelps’ teammate Chase Kalisz. The high school senior, who is headed to Georgia next year, had a two-second lifetime best swim, and pushed Phelps the whole way in this race. Kalisz is by far a breaststroker, so it wasn’t a huge surprise that he was three seconds faster than his training partner. But when Kalisz was able to close on Phelps on the freestyle leg – split 59.8 to Phelps’ 1:00.3 – it was a big shock. For the young swimmer, that’s a great swim coming off of altitude training.

Bradley Ally, now training at Club Wolverine, had a 4:18.44 for 3rd that was quietly overlooked thanks to the swims from the North Baltimore boys ahead of him. After a bit of a break from the sport, that’s now the second-fastest time of his career (only behind prelims of the 2008 Olympics); a 4:20 at this point would have been a very satisfying time for him, but a 4:18 should have him ecstatic.

There was no Phelps in this race after he scratched prelims, but Texas’ Dax Hill used his long 6’7 frame to just out-touch a tight back in 1:50.06. We saw Hill going back to his big front-end speed in this race with a 52.7 opening half; that’s something we’ve seen him do a lot in-season (both in yards and long course), but at crunch-time he’s had his best success when he back-half’s his races.

He would say after the session that though his main trials competition in this event (Phelps, Lochte, Berens, Vanderkaay) weren’t in this race, he went into it with the mentality that they were there, and that if he wanted to play with those guys he had to show the confidence to take the race out hard.

Local swimmer Quinn Carrozza from Nitro took 3rd in 2:12.32, which is her best time by almost three seconds, and the third-ranked time by a 15-16 this season. As a swimmer on the younger-half of the age group, that’s a great mark.

Stanford swimmer Matt Thompson won the men’s 200 back in 2:00.49; even with all of the change and turnover coming at Stanford, that’s a great bit of focus for him and his best long course time since 2009.

Megan Romano went four-for-four with best times in this meet where she’s had 7 phenomenal swims by taking the win in the women’s 50 free in 25.23. That’s a half-second drop for her, and her first win of the meet. This 50 free is not her best event, and probably not one where she’ll challenge for an Olympic spot at trials, but her ability to put up front-end speed to match that of swimmers like Franklin and Schmitt in the longer races will be vital there.

Simone Manuel was 4th in 25.67. With that swim, a lifetime best, she gets into seriously rare-air in 15-16 sprinting. Even in the bottom-half of that age group, she’s already as good as the likes of Kara Lynn Joyce and Maddy Schaeffer. Manuel seems to be the next great American sprinter in development. Her former First Colony teammate Maddie Locus, now at Georgia, was just behind in 22.71 for 5th.

And finishing off the meet was the always-exciting men’s 50 free. Club Wolverine swimmer George Bovell got out to a big early lead, but Texas’ Jimmy Feigen dug hard to reel him in. Feigen made up a huge chunk of ground in the closing 10 meters or so to get himself close, but Bovell ended up winning in 22.11 – not his best time of the year. Feigen was 2nd in 22.21. That probably doesn’t stack up as well in his personal hierarchy as his 100 free did on Friday, but he swam the race very well after a bad start.

Those two were well ahead of the field, with Chris Brady taking 3rd in 22.78.

Allison , the missile, is just doing perfect before trials and the 800 free relay ! wowwwch

Wow: amazing times by Schmitt and Romano. I repeat: the women’s 200 m free will be the BEST event ever in London! It will take a 1.56 to make finals. Lots of girls will succumb by the poolside during prelims. And those who make finals will have to show some endurance and mind toughness. Pellegrini will have to change her race plan: I don’t think people will buy into her strategy to hold back and come from behind: if Federica doesn’t go out hard and hang in there (for dear life), she won’t catch the leaders. To her credit, she did split it well during European Championships… Clary also swam a 4.15 at Santa Clara. I think he held some… Read more »

Ok I didn’t see coming this time from Allison Schmitt. 1.55.04 is amazing. Can she swim much faster this summer? I continue to think Camille Muffat is the favorite to win the 200 free and the 400 free but I admit that Allison Schmitt is on fire for many months, has an easy speed like Camille Muffat and has a great coach. The advantage for Camille Muffat is that she hasn’t 2 olympic games to prepare in one month. But if Allison Schmitt is at her top in London it will be a great race between these 2 girls. They have a similar style and are fast from the 100 free to the 800 free. Missy, don’t swim the 200… Read more »