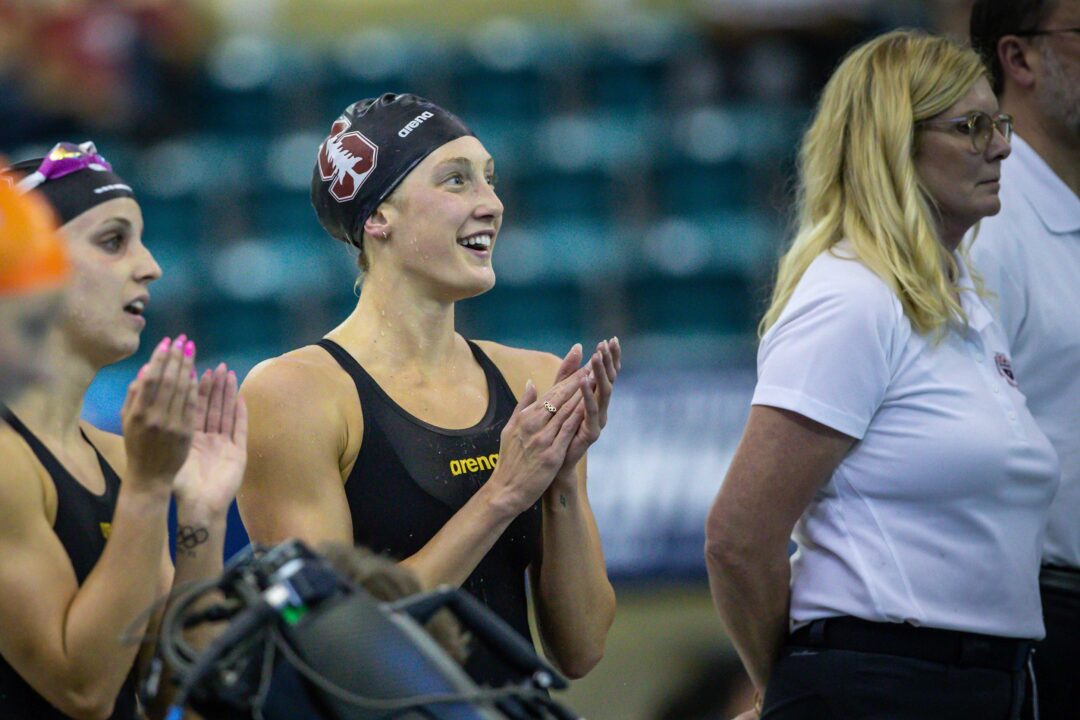 Taylor Ruck of Stanford is off to a great start of the meet, posting the fastest split in the field (1:40.49), which is a great start for her meet. Current photo via Jack Spitser/Spitser Photography

It’s finally here, the 2022 Division I Women’s Swimming and Diving Championship. Based on tonight, it looks like we’re in for a fast meet. Now it’s time to overreact.

For starters, Katharine Berkoff seems locked and loaded, ready to challenge Regan Smith for the 100 backstroke crown. Berkoff became the fastest performer in history with her backstroke lead-off split on the Wolfpack’s 200 medley relay, posting a 22.76 en-route to the team finishing 2nd behind Virginia. Smith was 24.31 leading off for Stanford, but totally missed her turn, going into the turn 3rd behind Berkoff and Gretchen Walsh, but came off the wall 7th. Berkoff is seeded 2nd behind Smith in the 100 backstroke by .18 seconds.

Speaking of Virginia, the Cavaliers added just a little bit of time compared to their ACC performance, winning the 200 medley relay in 1:32.16 seconds, versus their American Record 1:31.81 set at the ACC Championships. In the 800 freestyle relay, Virginia was 2nd (6:53.47) and at ACC Championships the team was 6:53.37. While Virginia is just a touch off from their seed times, they’re still close enough to cruise to another team title, barring an overall shift in the meet.

Stanford is off to a solid start, winning the 800 freestyle relay by five-seconds, the only team to dip under 6:50. The highlight of that relay was Taylor Ruck, who produced the fastest split in the field (1:40.49). This split sets her up for a very promising meet ahead. Stanford has been hammered by their performances both at the collegiate and international level recently. Ruck’s split and the overall 800 freestyle relay performance should help quell that a little.

Cal and Texas look like they’re ready to produce their best performances at this meet. Cal moved up from their seed in both relays, finishing 7th instead of 9th in the 200 medley relay. The Golden Bears were projected to finish 5th, but finished 3rd, led by Isabel Ivey’s 1:41.35 lead-off split, which is a lifetime best for her. She is swimming the individual 200 freestyle on Friday and sits 2nd on the psych sheet (1:42.29). Her split from tonight is faster than the top-seed in the event, Lia Thomas (1:41.93).

Based on Maggie MacNeil’s 50 backstroke split (23.07), she looks right on track from prior years, but not faster. Last year, she split a 23.17 on this relay. MacNeil also set the world record in the 50 back short course meters. Tomorrow will be the tell-all with the 50 freestyle. She was 2nd in the 50 freestyle last year, and is the reigning champion in the 100 butterfly and 100 freestyle. Overall, MacNeil will have to be on her A-game throughout this meet as she has challenges against big names in all of her individual events, especially in the 100 butterfly where she will face Torri Huske and Kate Douglass.

Louisville started out with a bang, like they usually do at the NCAA Championships. Over the past three NCAA Championships, Louisville has outscored their psych sheet projection. The Cardinals were not seeded to score in the 200 medley relay, but finished 8th, which was a massive pickup. Louisville also moved up from their projected 10th place to finishing 7th in the 800 freestyle relay.

It looks like first-year head coach Margo Geer has mastered the double taper for Alabama, putting the Crimson Tide in real contention for a 3rd place finish. Alabama was 4th in the 200 medley relay and 13th in the 800 freestyle relay.

12 out of 24 teams improved from their seed times in the 200 medley relay. The biggest drop was Louisville shaving nearly two-seconds off its seed time to pick up 22 points, when the Cardinals weren’t seeded to score.

Georgia also dropped significantly, posting a 6:56.58 compared to their seed time 7:01.34 seconds. The Bulldogs finished 5th, picking up 28 points versus their projected 6. Also improving was Florida (6:56.96), after being seeded at 7:01.77 seconds. The Gators picked up 26 points instead of their projected 4.

Part of Louisville’s medley relay “shave” was a lineup change. Not that there is anything wrong with that…just being pedantic.

This article to should’ve been titled “Over reacting to the stars who decided to shine in February”…. Ohio State’s Medley should have been mentioned. 20.98 from Amy Fulmer, second fastest split in the field. Making a big deal about another team that isn’t Cal, Stanford, or VA? That would be over reacting!

Actually, UNC’s Grace Countie had the second fastest split with a 20.92 FWIW

Are you sure about the 800 free relay times for Georgia and Florida? Didn’t Georgia finish 5th ahead of Florida?

There is really no overreacting in the article. How about UVA missed their taper adding time from conference? I mean we all know they were unrested and now they can’t even drop time. Or Taylor ruck looks primed to make a run at Missy’s 200 free record?

Taylor is doing the best freestyle she’s done in a few years, but tap the brakes a bit when raising Missy’s record.. Possible but remember Taylor was flat start 1:40.37 at her last NCAA. With an average flying start allowance tonight Taylor was a little under 2 seconds off Missy’s performance (1:39.10). I think Taylor had the best swim last night, a few tenths superior to Ivey’s flat start 1:41.35 (pool record surpassing Mallory Comerford’s 1:41.70), but they’ll both have to have huge improvements from their opening night performances to challenge Missy.

In the post-meet interview Gretchen talked about how nervous she was and sloppy the event was. They still swam super fast but I think she’ll dial it in as the meet continues and the nerves settle.

Said the armchair fan who never raced in a high level meet.

*ahem*. They really made you eat your words lol

Gotta love the masses of readers who confuse your post as person feelings against UVA versus understanding what true overreaction/hyperbole is.

lol I was just gonna say – people are NOT having talk of Missy’s record being challenged, thank you very much!!!

Yeah, UVA totally missed their taper (snickering and rolling eyes). That take was bad to begin with, and has aged even worse in half a day.