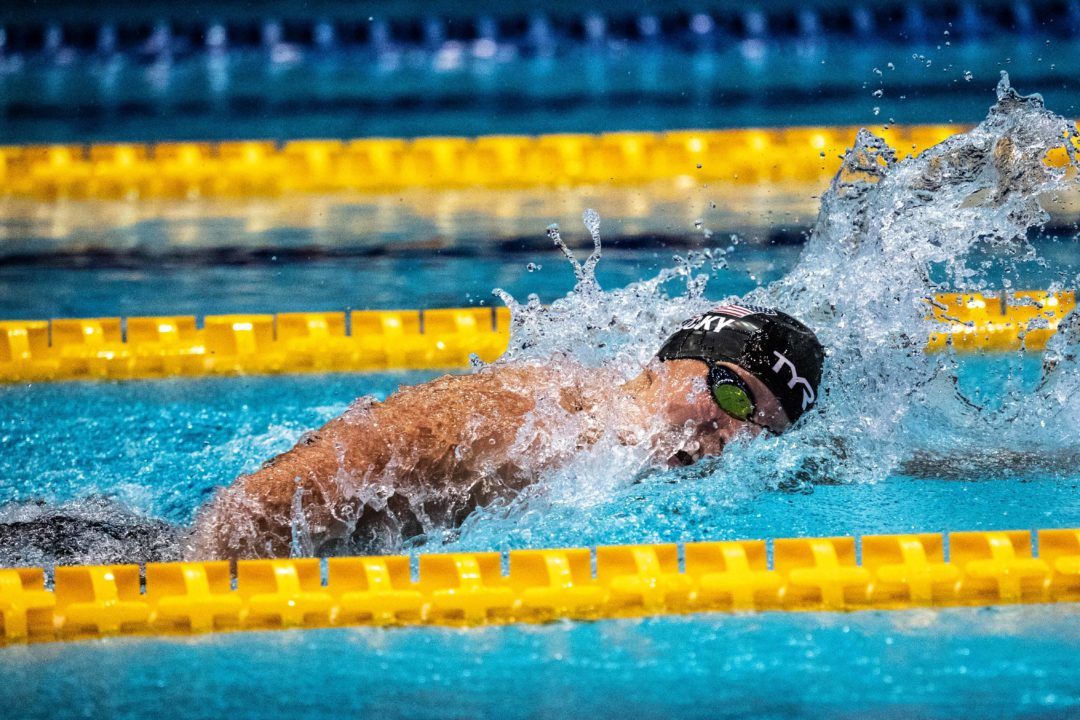 The final of the women's 200 and 1500 freestyles will fall on the same night at the 2020 Olympics. Archive photo via Mike Lewis/Ola Vista Photography

Upon the release of the 2020 Olympic swimming schedule, we learned that the final of the women’s 200 free and 1500 free would both fall on the morning of July 29th. While it’s not a surprise the two events coincide, both finals being on the same session is a bit of one.

Previously, the 1500 final and the 200 semis had fallen on the same session at the World Championships, with the 1500 going early on and the 200 later. Now, with the women’s 1500 debuting at the Olympics, the 200 final will be the second event of the fourth finals session, and the 1500 will be the penultimate one before the men’s 4×200 wraps things up.

While this schedule could potentially impact multiple swimmers, there’s one that stands out: Katie Ledecky.

Ledecky has gotten through the 200/1500 clash at the last two Worlds with relative ease. She obliterated the world record in the mile in 2015 before getting through to the 200 final about 40 minutes later in 6th position. Last year, though off her world record, she won the 1500 easily by nearly 20 seconds and then advanced through to the 200 final in 1st (though she did end up finishing 2nd in the final).

Despite the fact that in Tokyo it will be two finals matching up with each other rather than a final and a semi, it probably balances out with the 200 being first. Ledecky faces much steeper competition there than she does in the 1500, so going into that race fresh is vital. Not only did Federica Pellegrini beat her at the 2017 Worlds, Ledecky fell to bronze at the Pan Pacs behind Taylor Ruck and Rikako Ikee, and Australian Ariarne Titmus is another swimmer who could challenge for the Olympic gold in two years time.

Ledecky’s margin of error in the mile is a lot greater. At Pan Pacs she was almost 20 seconds off her best and still won by over 20 seconds, and she’s won the last two World titles by 14 and 19 seconds respectively. The only things this hampers is Ledecky’s chance at going on a world record run for the Games, but in terms of gold medals it sets her up better than if the mile preceded the 200. Though, without a doubt, having both finals in the same session is far from optimal.

Another swimmer this could potentially impact is Titmus, who was very impressive in the 200 and 800 this year, and could make a push up to the mile in the future. However, she has stated that she believes swimming up to the mile will hurt her 200 speed, and that, as of now, her primary focus is on the 200, 400 and 800.

Along with Ledecky and possibly Titmus, this could also affect China’s Wang Jianjiahe and Li Bingjie, who ranked 3rd and 4th respectfully this year in the world in the 1500 and were also in the top-25 in the 200. This probably seals the fact that neither will take a serious run at the 200 in 2020, though they may as their careers progress. Ledecky has seen improvements in the 200 as she’s gotten older, and both Wang and Li are still both just 16. Li won the Asian Games title last month in a personal best of 1:56.74, while Wang was an impressive 1:55.35 split on the 800 free relay there.

Another swimmer potentially impacted here is American Leah Smith, who qualified to swim both at last summer’s World Championships but ended up sitting out of the 1500. This year at Pan Pacs, she was 3rd in the mile and 4th in the 200.

With an already busy Olympic schedule getting even more jam-packed with the addition of three new events, this is where the women’s 1500 ended up landing. If they moved it up much further it would be close to the 400, and if they bumped it down it would run into the 800. We’ll just have to see how Ledecky, and whoever else takes on the double, handles it.

You probably don’t remember what has happened in Kazan. Only thanks to the Heemskerk’s and McKeon lazy swim Ledecky got to the final. She was 7th at last turn in semi. And how she managed to get third in this race with 1:56.7, nobody knows.

The real miracle is how she managed to swim 1:54.6 and qualified first after the mile last year.

That is nothing. She was well prepared for 200 and after this semi showed the swim of the same quality in 4×200 relay making her second fastest ever split 1:54.0
The real puzzle was her last 50 in final race – the slowest of all finalist of this race.

Should be the 800 first then 1500 last.
Men having their mile at the last 3 days but women having it at the middle of the meet is always a puzzle to me.

Because they are so lazy that they just added the M 800 and W 1500 into the original schedule. The women’s 800 was already at the last few days, so the 1500 can only be put in the middle.

Thank goodness that 200 free is before the mile. Ledecky would have no chance.

You cannot have any clue how the competition at 200 will look like in two years. It may happen that by that time there will be a swimmer who breaks world record. Or competition in this event gets stagnated and to be under 1:55 will be enough for gold medal.

This doesn’t change the fact that if the order was reversed, she’d be pretty drained for the 200 after swimming a 1500…

I don’t argue that 1500 race even being swum under cruise control is an energy consuming race. I don’t argue that in 1500 Ledecky has more cushion than in 200 (If any at all). I was responding to the statement that she has no chances if the order of events is reversed. Pellegrini and Franklin let her win the title with 1:55.16 three years ago. I cannot foresee what can happen to Taylor Ruck. One day she makes 1:51 split in SCM and next day she couldn’t qualify for WC. She looks like a swimmer who physically fits right to challenge Pellegrini’s world record but she will have two years of college swimming and it most likely won’t benefit her… Read more »

anything is possible but I think we know the likely players and I would even contend that we can be reasonably certain that a podium swim will require a 1:54.5 or better at worst a 1:54.8

I remember conspiracy theory talks that Americans made intentionally Yannick Agnel swimming slower in 200.
Well, Canadian swimmer who is #1 this season and is the major threat to Ledecky will be training in America. 😀
But I think that Taylor Ruck will swim only one season for Stanford and will take next year off to prepare for Olympics.

@TAA:
And who do you think will be that fast in two years? This year it was Taylor Ruck only who barely get qualified by your criteria.
There were only three swimmers in history who were faster than 1:54.4 of whom only Sjostrom did it more than once.1:54.4 is very fast. It was taken recently only by two exceptional swimmers: Ledecky and Sjostrom. Otherwise the level of competition in 200 stays approximately at same level for quite awhile and it is 1:54 well high.
Since Taylor Ruck isn’t considered yet of Ledecky and Sjostrom level her 1:54.44 is a break through. Which way she will go from this point or will she stay at this level is hard to predict.