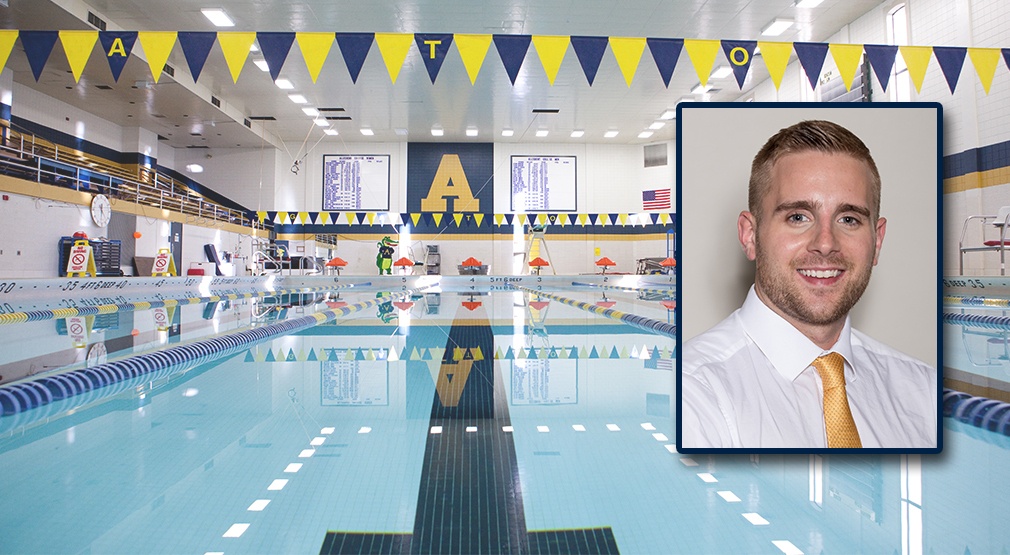 Allegheny College has announced the hiring of Max Niggel as head men's and women's swimming and diving coach. Current photo via Allegheny Athletics

MEADVILLE, Pa. – Allegheny College has announced the hiring of Max Niggel as head men’s and women’s swimming and diving coach.

“I am honored to have been selected to serve as head swimming and diving coach at Allegheny,” said Niggel. “I want to thank all involved in the hiring process for this opportunity. I feel a tremendous sense of duty, excitement, and motivation to bring this program to the next level in and out of the pool. Although we have only a few short years with our student-athletes, the role that a coach plays in athletic, academic, professional, ethical, and character development is crucial, and should be handled with extreme care. I am truly excited for the next chapter of Allegheny swimming and diving.”

Said Allegheny interim director of athletics Bill Ross, “I want to welcome Max to the Allegheny family, and I am excited to see all that he will bring to our swimming and diving programs. His success in his career up to this point is a clear reflection of his commitment to good principled leadership and values. His connection to Allegheny’s institutional values was evident in his conversations with us, and will provide a wonderful starting place for him as he takes up this new opportunity.”

Niggel spent the 2017-18 season as assistant coach at Clarion University, assisting with all day-to-day aspects of the program and helping to lead both the Golden Eagle men’s and women’s teams to a fourth-place finish at the Pennsylvania State Athletic Conference Championships. Individually, the Clarion men produced three event championships and seven top-three performances at the PSAC Championships, while the Golden Eagle women produced two champions and five all-conference performances.

Niggel was also responsible for overseeing study programs and monitoring academic performance of the Clarion program, and the Golden Eagles excelled in the classroom. Both the men’s and women’s teams earned College Swimming and Diving Coaches Association of America (CSCAA) Scholar All-America distinctions, while a pair of Clarion swimmers were named CoSIDA/Google Cloud Academic All-District. The Clarion women also produced the highest team GPA in the PSAC at 3.59, while the men’s team ranked third among conference schools at 3.20.

Prior to joining the Clarion staff, Niggel spent the 2015-16 and ’16-17 seasons as assistant coach at Gannon. He played a big role in recruiting, bringing in over 20 student-athletes in each season, while he also oversaw the marketing and administration of Gannon’s successful Learn to Swim program, as well as various summer swim camps, clinics, and lessons that served as the team’s primary fundraiser. A Certified Strength and Conditioning Specialist, Niggel was also responsible for developing and implementing Gannon’s strength and conditioning program, as well as overseeing mental training and nutritional support.

With Niggel on the staff, Gannon swimmers posted a total of 10 NCAA ‘B’ cuts and won five PSAC event titles, including the first two female titles in school history.

In addition to his college coaching experience, Niggel has served as a head coach and camp counselor at the Edinboro Summer Swim Camp since 2009, implementing age and skill appropriate skill instruction and training while also helping to maintain attendance in the program which led to consistent revenue growth.

From 2013-14, Niggel was a personal trainer and fitness supervisor at Best Fitness in Erie, Pennsylvania, where he worked with over 80 clients in both group and one-on-one settings. He would then move on to be named the health and wellness director at the YMCA in Grove City, Pennsylvania, and implemented a variety of successful fitness and conditioning programs while also supervising and scheduling a staff of over 20 professionals in the organization’s wellness department.

Niggel graduated from Edinboro in 2013 with a B.S. in Health and Physical Education, with a concentration in Human Performance. As a student-athlete, he earned multiple All-PSAC honors, and was named the 2009 PSAC Men’s Swimming Rookie of the Year. He set school records in the 1,000 free and 100 back, and earned a total of nine NCAA ‘B’ cuts. Additionally, he was the 2009 Erie Bay swim champion.

A native of Corry, Pennsylvania and graduate of Corry Area High School, Niggel is currently pursuing a Masters in Business Administration from Clarion, with expected completion in the spring of 2019.