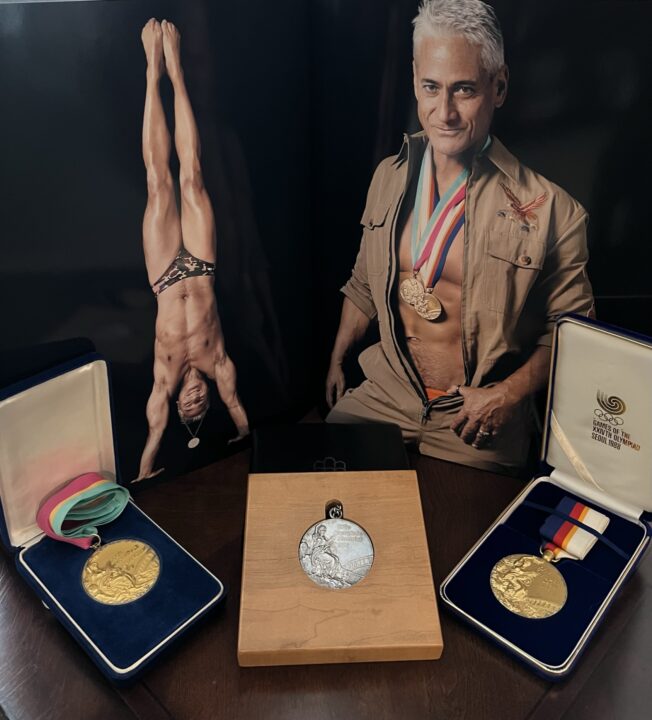 U.S. Olympian Greg Louganis is auctioning off more than fifty personal items, in hopes of inspiring others to reach their full potential. Current photo via Greglouganis.com

Olympic diving champion Greg Louganis is in the midst of auctioning off 58 personal items, including two of his Olympic gold medals. The auction, which is taking place on his website,  began on November 11th and will end December 4th.

The medals being auctioned off for private sale are his 1984 Los Angeles 3-meter gold medal and his 1988 Seoul 10-meter medal. Additionally, his 1976 Montreal 10-meter silver is also being sold. Other items include photographs and other autographed memorabilia like hats, posters, and suits.

According to his website, Louganis “hopes that by sharing his memorabilia he will inspire others to reach their fullest potential.” There are many items currently on the website, but some are not listed yet or have been already offered to the Smithsonian American History Museum.

Bids are starting as low as $45 for an autographed hat, and range up to $3000 for a personal scrapbook. He is seeking bids that fall in the 7-figure range for the Olympic medals.

Louganis is a five-time Olympic medalist, as he won gold in 3-meter and platform at both the 1984 Los Angeles Olympics and 1988 Seoul Olympics. He is the only male diver in Olympic history to have won both events in consecutive Olympic Games. He also has won five World Championship titles and 47 national titles, which is the most in history.

Outside of diving, Louganis has been an actor, coach, author, and activist. He has a history of  being an advocate for the LGBTQ+ community, as well as for HIV/AIDs awareness.

I was married to this man for 8 years. I know him, loved him, still do. People can be so cruel, so judgmental without a single bit of information. You have the right to your opinion, and it’s just that , yours. if you do not want a piece of history ……ok……but refrain from your questioning. I know, I was there.

$45 for an autographed hat????? Some hats cost that much without any autographs.

I also question the benevolence of this auction

Watch Back of Board , I was married to the man for 8 years , believe me, you have the right to question , that is your right, and yo have no idea,

Greg has a well documented history of financial struggles. There is a documentary (made with his involvement) that gets deep into it. I think he may have been a victim of fraud/embezzlement at some point. I think he was effectively unemployed until USA Diving reached out a couple of Olympic cycles ago and asked him to be a mentor/cheerleader of sorts. I wouldn’t be surprised if he’s trying to bank some financial security, and I wish him luck in doing so.

He is not saying he’s broke (but could be). In other articles he’s explained that they have served their purpose and wants others to share in the joy. Marie Kondo inspiration.

I was Married to him for 8 years your uniformed judgment is what’s wrong with the world. You have no idea and at the same time have all the answers.

I was married to him for 8 years, is it weird to say I am broke? People say “I am rich” all the time. Watch Back on Board

I will be absolutely shocked if those medals go into the 7 figure range. I also question the sincerity of this auction being billed as altruistic. Is auctioning off medals and personal items for cash (vs having the money go to a charity) inspiring? Just say “i need money and im auctioning off some stuff.”

He states that (some of?) the money is going to charities. Children and HIV causes.

I was married to him for 8 years, passing judgment without knowledge is not nice.