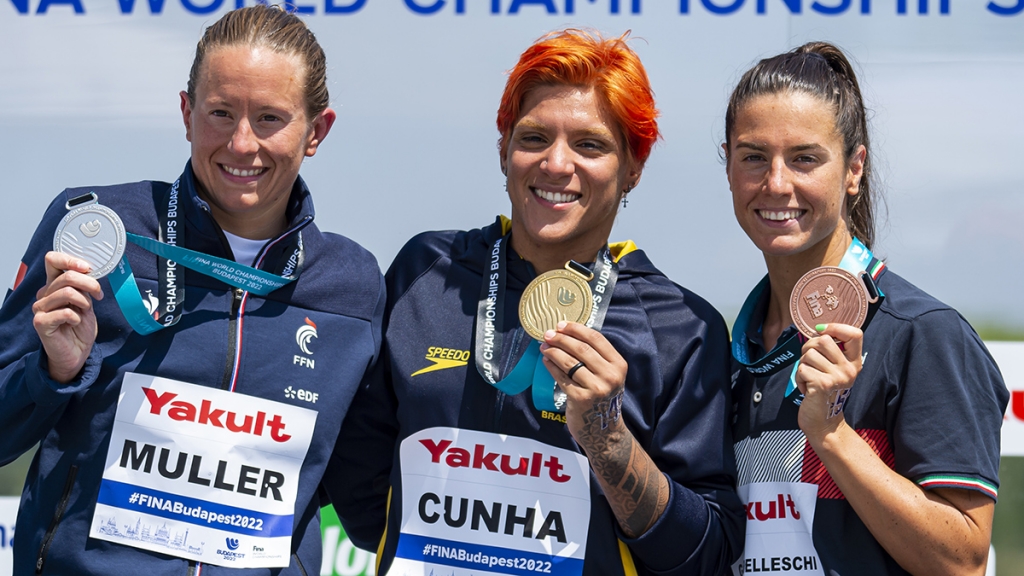 After a chaotic first day of racing in Lake Lupa on Sunday, things settled in to a more predictable pattern on Monday for the men’s and women’s open water 5km races.

Water temperatures at Lupa this week are reading around 26 Celsius (79 Fahrenheit). That puts it well within the safe range for FINA events (16-31 Celsius), and with the lake being fed by the same springs that provide most of Budapest’s drinking water, Budapest provides a fairly comfortable setting relative to many open water events.

The men’s 5km race, which went off at 9AM, was won by Germany’s Florian Wellbrock – his second gold medal already in open water competition after anchoring the winning 6km mixed relay on Sunday. The women’s race, which started at noon local time, was won by Brazil’s Ana Marcela de Cunha. Both were at least among the favorites, if not the favorites, in their respective races.

The three medalists in the men’s 5km race all won medals in the pool last week as well. Germany’s Florian Wellbrock, winner of gold in the open water 5km race, took silver in the 800 and bronze in the 1500 in the pool.

Paltrinieri, silver medalist in the open water 5k race, took gold in the 1500 one of the best pool swims of the championships, and was 4th in the 800.

Romanchuk, bronze medalist in the open water 5k race, took bronze in the 800 free in the pool and was 5th in the 1500 free. Romanchuk is from Ukraine and gave an emotional interview last week about the ongoing war in his home country.

Wellbrock is beginning to separate himself as the world’s top open water swimmer on the men’s side. His win on Monday comes after also winning the Olympic 10km race last year in Tokyo. His win is the 5th time that Germany has won this race in 12 editions of the World Aquatics Championships: retired swimmer Thomas Lurz won four straight titles from 2005 through 2011. Germany is the all-time leading nation in open water swimming with 15 gold and 42 total medals.

While Romanchuk was in contention for the first three-quarters of the race, the battle was always going to come down to Wellbrock and Paltrinieri – just as it did in the team race on Sunday where a very-late surge from Wellbrock got him the win. By the finish, Romanchuk was a distant 3rd.

Olympic 10k silver medalist Kristof Rasovzky, racing in home water in Hungary, was just 9th in this 5k. He improved as the race went on, however, and showed that he might still be a contender for the 10km race later in the meet.

The Americans Brennan Gravley and Simon Lamar placed 10th and 15th, respectively. in a field that saw 63 enter, 61 start, and 52 finish within the time limit.

Brazil’s Ana Marcela Cunha, arguably the greatest in the history of the discipline, extended her lead as the winningest woman in open water in World Aquatics Championships history on Monday. Her gold medal was her 6th such medal and 12th overall, both of which are the most-ever.

The win is a second-consecutive title for Cunha, and the silver medal was a third-consecutive runner-up finish for France’s Aurelie Muller in this event.

There was a pretty sizeable lead-pack throughout the race, bigger than we usually see at this level of competition, but Cunha dramatically increased her speed and tempo in the closing stages to force that group into a a high-speed finish, which plays into the hands of Cunha. Her stroke tempo jumped from 39.2 strokes-per-minute in the penultimate lengths of the race to 45.9 strokes-per-minute coming into the finish.

The race was ultimately decided by 9-tenths of a second, about the same margin as the 2019 race. In spite of only being 5’5″ tall (shorter than the Frenchwoman Muller) Cunha routinely finds a way to get her hand on the pad first in these races.

While Cunha is the defending Olympic champion in the women’s 10km race, it is the one individual event in which she has never won a World title. After a rest day Tuesday, she will have a chance at shoring-up that hole in her resume on Wednesday.

Giulia Gabrielleschi of Itlay won bronze. That is her first individual World Championship medal after contributing to three-straight medals in team events. The 25-year old was 6th in 2019, and took advantage of the absence of her better-known countrymate Rachelle Bruni (who is entered in the 10km race later in the week).

Gabrielleschi did receive the only yellow flag warning on what was a fairly-clean day of racing.

Australia’s Moesha Johnson, who also swam the 1500 in the pool, was 8th in 58:02.5, within 10 seconds of the leaders. Another of the all-time greats in open water, Netherlands’ Sharon van Rouwendaal, was 10th and was the back-half of that lead pack: the next-best finisher was almost two minutes behind her.

56 swimmers entered the men’s race, 55 started, and 51 finished within the time limit.

It would be nice if SwimSwam updated the open water results as quickly as they do the pool results.

Great work by Kyle and Moesha!!

Great performances by the Europeans! How after the dominance in the pool are the Americans not even getting close to the podium in open water?

Americans in general have much less experience of international level OW while Europeans practice at all world cups and some of the LEN Cups.

Also US OW budget is much lower than at the big European countries.

Agree, It’s embarrassing! USA Swimming doesn’t do the things necessary to provide our athletes the experiences to compete against the best open water swimmers in the world. I don’t buy the budget argument, the leadership of USA Swimming has clearly made a choice and it’s very disappointing.

American based here – we suck.

Europeans send all their best distance swimmers to these championships. I don’t even recognize the names of most of these American swimmers.

If Bobby Finke and Katie Ledecky did open water competitions…

Paul, the answer is not as simple as “throwing in” some good distance pool swimmers and see how they go. Pool and Openwater are definitely 2 distinct disciplines and there is certainly a lot of discipline specific training to be elite at both. Definitely not achievable for everyone. Have seen many a good pool swimmer randomly try Openwater with very mixed results.

the Wellbrock-Paltrinieri-Romanchuk line-up must be the most intimidating competition at the start, who would ever think they have a chance against them?

Rowdy would be able to call the men’s races. During the women’s race he’d be stumped and talking about Ledecky

and this is the real staff – just after the swim
https://fb.watch/dVyZhjSBoQ/

So the pool swimmers steal the show?