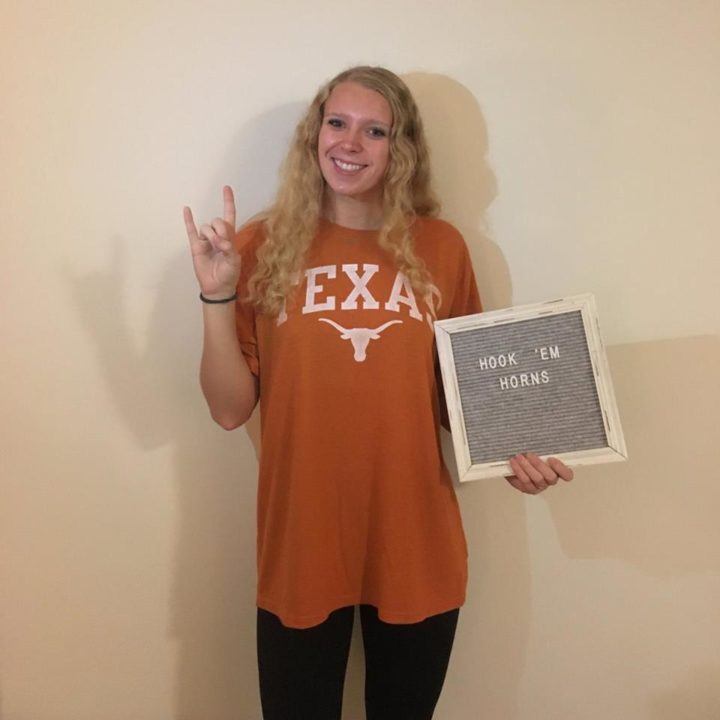 Bray had never broken 52 seconds until this morning, and her previous 100 back best was a 52.02, a time she hadn't bettered since 2017.  Archive photo via Olivia Bray

The Texas women are hot after smashing the school record in the 400 medley en-route to a nation-leading time last night.

This morning, star freshman Olivia Bray doubled up with the 100 fly and 100 back, and hit the morning’s best times in both. In the 100 fly, she clocked a 50.67, just a few tenths off of her lifetime best. That swim puts her at #2 in the nation behind only Virginia sophomore Kate Douglass‘s 49.73 from November. Bray is also the only other woman under 51 seconds in the 100 fly this season.

The 100 fly performance this morning is also a new school record, which felt like a foregone conclusion after her split last night and her speed coming into the program. She topples Olympian Kathleen Hersey’s 51.40 from way back in 2008.

This morning’s session was dominated by Texas freshmen on the men’s and women’s sides. Emma Sticklen was just off of her best in the 100 fly, going 52.07 behind Bray, while Anna Elendt broke a minute for the first time to lead the 100 breast prelims (59.31). Elendt was 57.83 on the school record-breaking 400 medley relay last night, so we can reasonably expect another big drop tonight.

Zac Van Zandt was another freshman popping a lifetime best, as he was 46.44 in the 100 fly to take a few tenths off of his old PR. Senior Alvin Jiang was only 50.28 and out of the A-final tonight in a perplexing swim after his 44-second fly leg on the medley last night. He was nearly at full speed in the 100 back, though, clocking a 45.12 for the best time this morning by over a second-and-a-half.

Now that Gregg Troy is retired, Texas becomes the only college program on earth that never rests its swimmers for any meet ever, but when they do, look out, they’ll definitely all break every record ever.

That’s not quite true, Braden. Texas only tapers for the meets that matter: Orange/White meet, Eddie Reese Invite, and Class Relays. 🙂

And they wait for Olympic finals to actually shave down