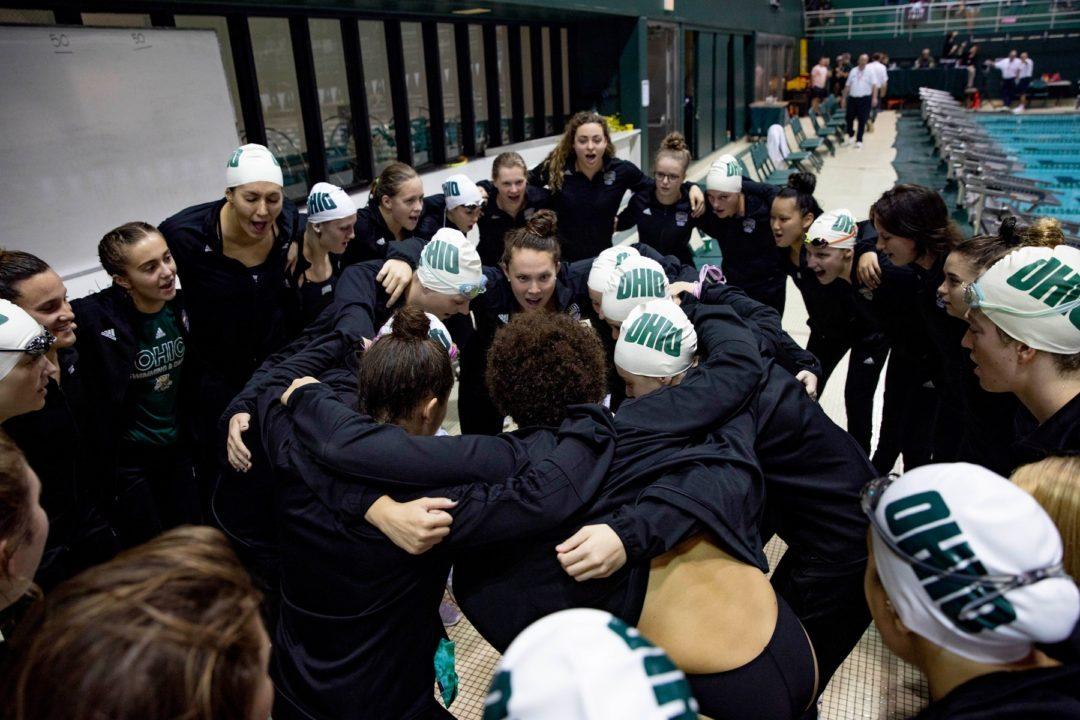 “I’m so proud of the way that our girls handled the weekend,” said first year head coach Mason Norman. “We were able to build today on great performances yesterday. We faced two very good teams today and our girls raced hard and are working together as a team. Lexie White, Kendra Sheehan and Athena really stepped up today. Everyone contributed points yesterday and today for three team wins.”

“Our divers stepped up again and provided us with a great start this morning,” said Norman.

Ohio went on to win the next three events beginning with sophomore Samantha Glass (Villa Hills, Ky.) who clenched her second 200-yard butterfly victory of the weekend with a race time of 2:06.42 Senior Maddie Wyke (Columbus, Ind.) clenched third for the Bobcats with a time of 2:09.69.

Sheehan registered a second-place finish for Ohio in the 100-yard butterfly with a time of 58.89 while Glass added a fourth-place finish, Davis added a ninth-place finish and Wyke added a 10th place finish with race times of 59.51, 1:00.84 and 1:00.86 respectively.

The meet concluded with a race win for the Bobcats in the 400-yard freestyle relay with a time of 3:35.05. The victorious Ohio relay team consisted of Perrett, Garrity, White and Van Lanen as the anchor

PITTSBURGH – The Duquesne swimming and diving team split a pair of duals on Saturday in the Dukes’ 2019 home finale, as DU topped Xavier by a score of 159-100 and the Dukes fell by a score of 137-124. The Bobcats also bested the Musketeers 169-90 on the day.

DU’s 200-yard medley relay team of Audrey Steen (San Pedro, Calif. / San Pedro), Stauffer, McKnight and Smith kicked off the swimming portion of the meet with a first-place mark of 1:46.57.

Head coach David Sheets: “I was extremely happy with how the team performed today. With it being senior day, it is always a special day. This group has done so much for our program and I am glad their last home meet at Towers went so well. I am excited for how we raced and the upcoming weeks moving towards A-10’s”

Head diving coach Charlie Hauser: “Today everyone made some great progress. We are returning to competitive form after the mid-season break. We need to remain focused on our goals and continue building confidence, but I think we are tracking in the right direction at this stage.”

NEXT UP
Duquesne makes the short trek to Trees Pool for the 2019 Western Pennsylvania Invite hosted by Pitt. The divers will compete on Friday, Jan. 25 starting at 1 p.m. followed by swimming on Saturday, Jan. 26 at 12 p.m.

PITTSBURGH – Xavier women’s swimming eight top-three finishes at Towers Pool at Duquesne, but fell to the host Dukes and Ohio on Saturday afternoon. Caroline Gaertner posted the top finish by a Musketeer, winning to 100 back. Emily Conners finished top three in the 50 free, 100 free and 200 free.

UP NEXT
The men and the women return to the pool on Sunday, January 27 at the Butler Invite, with events beginning at noon at Fishers High School in Fishers, Ind.