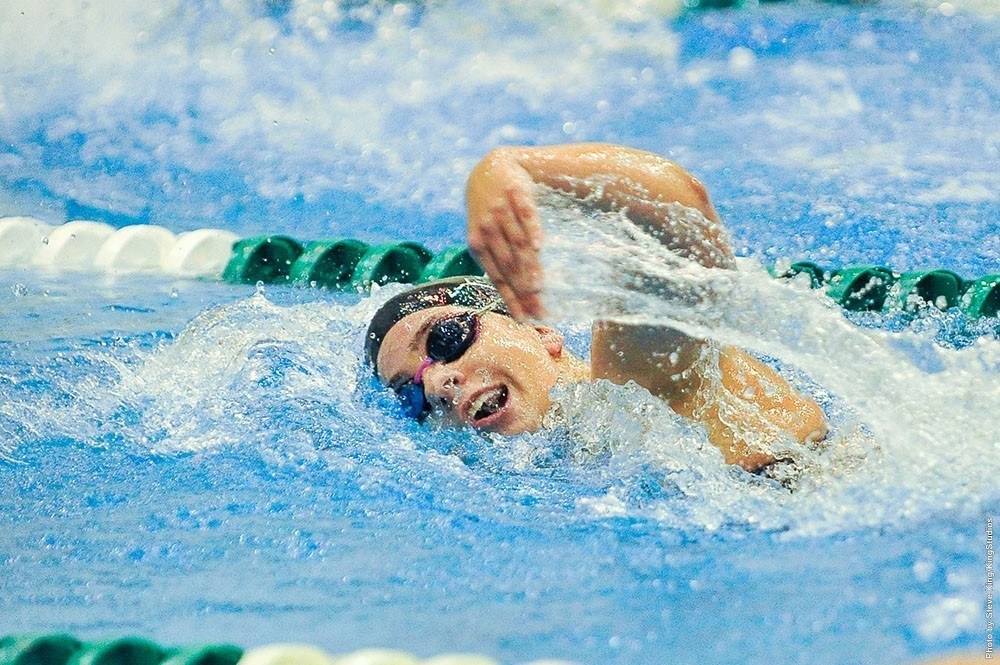 ROCHESTER, Mich. — Devon Nowicki won the 100- and 200-yard breaststroke, 200 IM and was a member of the winning 200 medley relay while Holly Morren won the 50 and 100 freestyle and was on the winning 400 free relay as the Oakland men’s and women’s swimming and diving teams split with Eastern Michigan Saturday at the Oakland Aquatic Center. The men’s team defeated the Eagles 160-140, marking the first victory for the Golden Grizzlies in the series since the 2012-13 season, while the women’s team fell 193-107.

ROCHESTER, Mich. (EMUEagles.com) – The Eastern Michigan University men’s swimming and diving team traveled to Rochester, Mich., Saturday, Nov. 12, for a non-conference dual against Oakland University. The Eagles came up short on the road, as the Golden Grizzlies took the meet by a final score of 160-140.

Sophomore Jake Tyson (Ipswich, England-Northgate) provided the Eagles with their first win of the afternoon in the 200 freestyle, taking the top spot with a time of 1:40.29.

Moving to the 100 backstroke, sophomore Tosh Kawaguchi (Cary, N.C.-Cary) continued his strong start to the season. Besting the field with a time of 49.71, Kawaguchi turned in his third win of the season in the event.

On the heels of a third-place mark by freshman Matthew Tsenkov (Sofia, Bulgaria-General Vladimir Stoychev) in the 100 breaststroke, freshman Parker Saladin (Buchanan, Mich.-Buchanan) and sophomore Ricky Perez gave the Eagles a 1-2 punch in the 200 butterfly. Saladin won the race, clocking in with a time of 1:51.53, while Perez was the runner-up after touching in with a time of 1:52.56.

Junior Connor Johnson (Fort Bragg, N.C.-Terry Sanford) nabbed third-place in the 50 freestyle with a time of 21.35. Through seven events, the Green and White trailed, 71-60.

EMU turned to the divers to get it back on track as the meet headed to the break. Junior Peter Rusenas (Naperville, Ill.-Naperville Central) posted a score of 303.90 on the 1-meter to earn the win. Sophomore Tom Gillis (Halifax, Nova Scotia-Citadel) wrapped up a second-place finish with a score of 295.27 to even the score at 75 all. Gillis later added a win on the 3-meter, while Rusenas claimed third.

Oakland regained the lead in the 100 free, despite a third-place time of 46.55 by junior Logan Burton (Chesapeake, Va.-Hickory), but Eastern came right back with a sweep of the 200 backstroke. Kawaguchi led the way, completing the sweep of the backstroke events, while senior Cole Bateman (Hutchinson, Minn.-Hutchinson) and Perez rounded out the top-three.

Johnson and Perez added top-three finishes down the stretch but it was not enough to lift the Eagles to victory, as EMU fell 160-140.

EMU returns to competition, Dec. 2-3, when it hosts the EMU Invitational. Day one of the meet is slated to begin at 3 p.m.