Illinois State Takes Down Ball State In Weekend Face Off 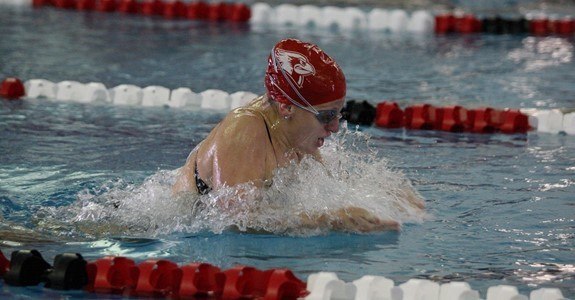 NORMAL, Ill. – The Illinois State swimming and diving team came out on top against Ball State in a dual meet Friday at Horton Pool as the Redbirds won, 172-128.

The team of Cain, Rachel Holm, Root and Kristin Verkler formed the winning 400-yard medley relay team (3:53.87), which set a new Horton Pool record in the process. The team of Laura Paskoff, Root, Mary Katherine Tillotson and Verkler closed out the Redbirds’ victory, finishing first in the 400-yard freestyle relay (3:34.49).

“It was a great meet for us tonight,” ISU head swimming coach Scott Cameron said. “We started off the meet with a new pool record, and we rode the momentum from there. They are a little tired from training the past few weeks, but I think this sets us up very well for our midseason meet next week.”

“I was happy with the way the team put together their lists. At this time in the season I don’t really want them peaking,” ISU head diving coach Phil Hoffmann said. “I know there are some things we need to work on but I felt like they had a good performance and finished out the competition well. I’m looking forward to a week off training before our midseason meet.”

Fans can receive live updates and more by following @RedbirdSwim on Twitter.

Along with being part of the 400 medley relay and 400 freestyle relay, senior Jessica Extine finished first in the 50 freestyle with a time of 24.60. She also placed third in the 100 freestyle at 53.85.

“We had some exciting finishes and close races today,” said head coach Kristy Patterson. “Illinois State has a strong team and we needed to be our best to win the meet. They were the better team today.”

“Our dive squad came through big with 1-2-3 finishes on both boards,” Patterson added. “We also had many season bests and a pool record in the 100 breaststroke. We will need to be on point when we compete next week. We will learn from these performances and get better from them.”

The Ball State women’s swimming and diving team will return to action next weekend, Saturday, Nov. 19, at Grand Valley State beginning at 1 p.m.

For the most up-to-date news on the Ball State women’s swimming and diving team, please follow @BallStateSports and @BallStateWSwim.