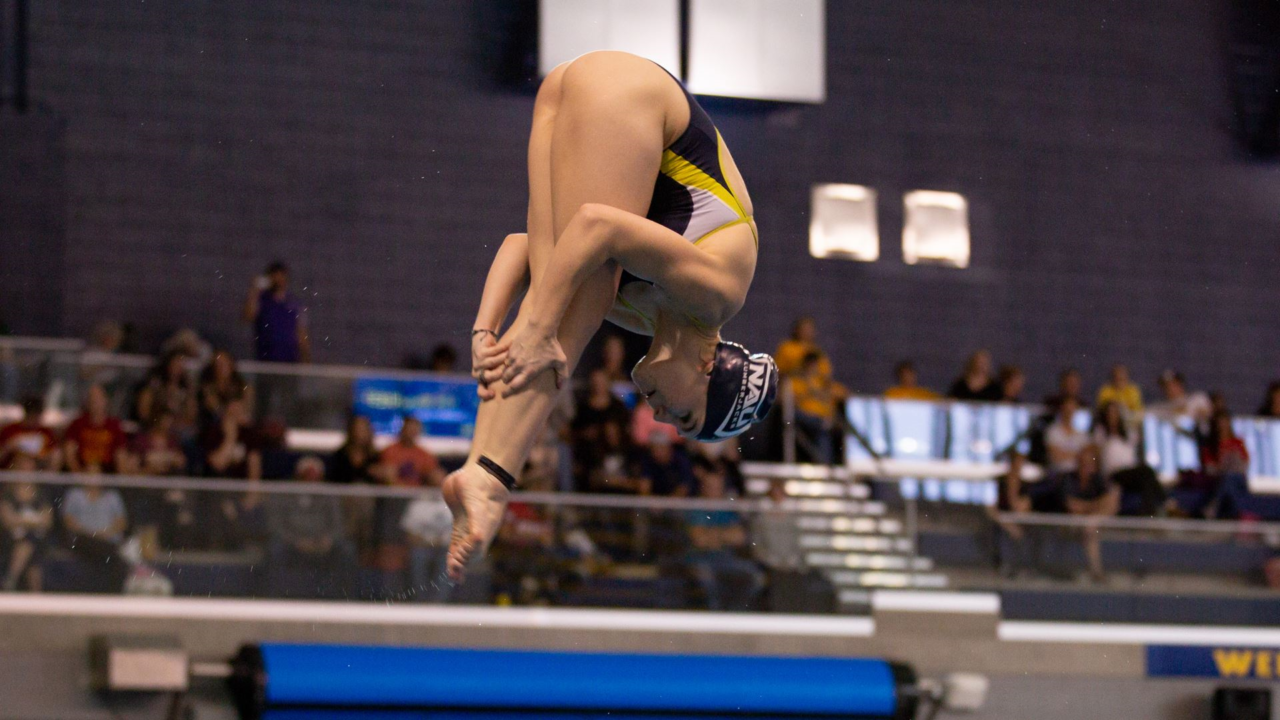 Freestyler and backstroker Hannah Jones has committed to swim for DI Ball State University beginning fall 2021. She will join the Cardinal’s class of 2025.

“The meet today was really close, a really tight match,” head coach Andy Johns said. “There was a lot of back and forth between the two teams.”

Proving to be true, the Bears won seven of the 16 events with really close times in each one. In the first event, the 400 medley relay, UNC took first, owning a 3:35.97 time. Sarah O’Connor, Hope Williams, Maddie Seidl and Elisa Rodriguez took second with a 3:53.19 time. The Bears earned 13 points during this event, with the ‘Jacks just earning four.

Seidl broke UNC’s three event winning streak by swimming a 2:08.80 200 butterfly, beating UNC’s Petra Kris by about three-fourths of a second (2:09.57). The Bears did come back to win first in the 50 free, but Rodriguez earned second place with a time of 24.14.

After Northern Colorado won in the 50 freestyle, the ‘Jacks took control of the next five events: 1-meter diving, 100 free, 200 backstroke, 200 breaststroke and 500 free.

Halfway through the meet, Northern Colorado was 80-70 over the ‘Jacks. However, the lead did not last long.

Northern Colorado won two more events: the 100 butterfly and the 200 freestyle relay. In the 100 butterfly, NAU took three of the five top spots. Seidl came in second with a time of 58:74, Bier took third clocking in at 59:24 and Natalie Dinch earned one point with a time of 1:01.41. In the 200 free relay, UNC took first, but the Lumberjacks took second and third. Spielman, Rodriguez, Montiel and Hick swam their relay with a 1:38.40 time. Foster, Abby Nelson, Hazel and O’Connor earned their third-place spot with a 1:39.95 time.

Niamh McDonagh helped to clinch the win for the Lumberjacks in the 200 individual medley. McDonagh placed first with a time of 2:10.04. Mayhew came in third, swimming a 2:10.53 time. Jendbro followed behind Mayhew in fourth with a time of 1:12.76.

Northern Arizona secured a 157.5-142.5 win over Northern Colorado.
“Our girls showed a lot of toughness,” Johns said. “We’re happy and fortunate to come away with a win today.”

The ‘Jacks will continue competing tomorrow as they take on Air Force and Colorado State in a double-dual meet in Colorado Springs, Colo. starting at 2 p.m. MST.

Northern Colorado swimming and diving continues to show it’s going to be a force to be reckoned with as they stayed neck and neck with WAC powerhouse Northern Arizona on Friday evening. The Lumberjacks just barely sneaked passed the Bears 157.5-142.5.

UNC won seven of the 16 events and took second place in seven events as well. Two of the team’s seven wins came in the 400 medley relay and 200 freestyle relay.

Northern Colorado jumped out to a strong start in the meet taking first place in six of the first seven events, including going 1-2 in the 200 free and 100 breast. Anna Austin and Paula Núñez Blázquez went first and second in the 200 free with times of 1:56.51 and 1:57.23.

In the 100 breast, Maria Heymans and Leilani Herrera led the charge for UNC touching the wall with times of 1:04.68 and 1:06.27. Heymans was also apart of the 400 medley relay team that took first with a time of 3:51.97. Joining her on the relay was Maddy Moore, Hallie Peterson and Emily Hamel.

Moore won the 50 free with a swift time of 23.79 and joined Hamel on the 200 free relay that closed the meet out with a first place finish. The duo teamed up with Doris Pustzay and AJ Popp to win in 1:36.45.

Popp earned herself an individual first place in the 100 back with a time of 58.26.

What They Said
Head Coach Lisa Ebeling
“Today was another big step for our program. NAU is a great team and we managed to throw down a lot of nail-biting races. As always, there are still technical areas that we will continue working on, but the girls really came together with passion and heart and did everything they could to put up a good fight.”

What’s Ahead
Northern Colorado has two weeks to prepare for their next dual meet when they travel to Idaho on November 1. The meet between the Bears and Vandals is set for 5 pm MT.