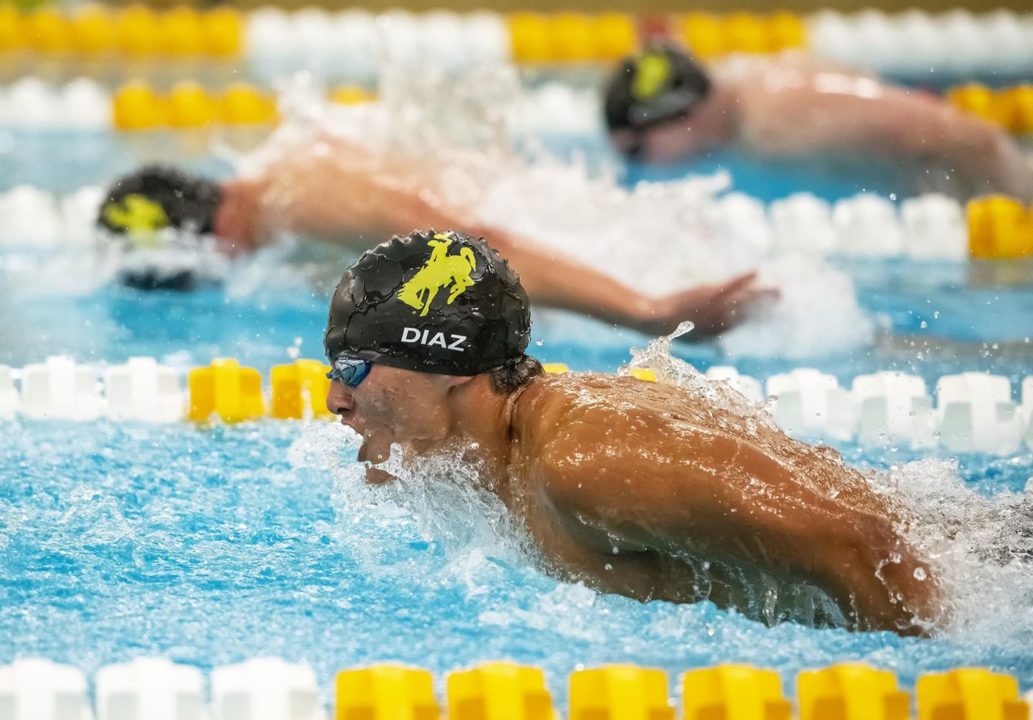 LARAMIE, Wyo. (Oct. 18, 2019) – Both the Cowboy and Cowgirl swimming and diving teams earned their first conference victories of the season Friday night in Laramie. The Cowgirls took home a 174-126 win and the Cowboys came out on top 159-141.

“I think both the men and women raced really hard today. We had a lot of close races that came down to the wire. I think our guys put everything they had into this meet. Several of the women swam some different events for the first time and they raced really well,” head coach Dave Denniston said. “I think the highlight of the day was we were able to get our divers on the boards and coming away with wins on both boards for the men and women was huge.”

The first Cowgirl swimmer to win an event on the day was freshman Roxanna Ramirez. Ramirez would record a time of 10:51.36 to take the top spot in the 1000 freestyle. She would be followed senior Astrid Iturbe who clocked a time of 11:02.58. The Cowboys would make it back to back wins for Wyoming with a first place performance from senior Seth Borgert. He clocked a time of 9:55.54 to win the event while freshman Daniel Cumnock-Francois placed third with a time of 10:01.73.

The Cowgirls would keep things rolling in the 100 backstroke as freshman Emily Giles would take the victory for the brown and gold with a final time of 57.44. Sophomore Kira Crane would also score points in the event finishing in fourth place with a time of 1:00.03 which would be a season best time for her. On the men’s side, senior Tyler Klatt placed second with a time of 50.75, while Miller Browne recorded a time of 51.76 for fourth.

In the 100 breaststroke events, it would be another back-to-back set of victories for Wyoming. Sophomore Phoebe Browne would touch the wall in first with a season best time of 1:06.12. Junior Mitchell Hovis would take first in a very close race finishing with a time of 55.72.

It would be more of the same in the 200 butterfly with junior Hannah Mclean-Leonard continuing her dominance in the butterfly events clocking a time of 2:09.43 to finish first. In the men’s heat, it would be junior Brayden Love who would get the victory after recording a time of 1:51.58.

The 50 freestyle would be yet another back-to-back win for Wyoming. This time on the women’s side, it would be Carsrud winning her first event of the meet with a time of 24.37. On the men’s side, sophomore Grant Sloan would pick up the victory for the Cowboys with a final time of 20.69.

Two Cowboys would put points on the board on the 100 freestyle led by a first place finish from senior PJ Musser who recorded a time of 45.81, out touching the second place finisher by .02. Sophomore James Bouda would finish fourth in the event touching the wall at 46.45.

In the women’s 200 backstroke, junior Katelyn Blattner would earn another victory for the Cowgirls as she touched the wall in first with a final time of 2:05.36. Freshman Courtney Hughes would finish sixth in the event with a time of 2:11.20 and sophomore Molly Green would place seventh with a time of 2:12.95.

On the men’s side, the meet would could come down to the final race which was the 400 freestyle relay. Unfortunately, Air Force had both of its A&B relays disqualified. That gave the team of Musser, Bouda, Sloan and Netzel the win with a time of 3:02.44 and sealed the victory for the Cowboys.

On the boards, the Cowgirls and Cowboys would get off to a strong start by sweeping the 3-meter event. On the Cowgirls side, freshman Melissa Mirafuentes, competing in her first dual meet as a Cowgirl, would dominate the field winning the event with a score of 329.48. Redshirt junior Karla Contreras placed second with a total score of 290.40. Sophomore McKenna Houlihan and freshman Makena Sanger would take seventh and tenth with scores of 216.68 and 160.35, respectively. For the men, sophomore Brendan Byrnes would put on a strong showing posting a score of 308.10 to take first, scoring almost 40 points ahead of the second place finisher. Freshman Payton Lee and junior Elijah Chan finished fifth and sixth with scores of 237.83 and 235.95, respectively.

Next up for the two squads is Friday, Oct. 25 against the Colorado School of Mines. The meet is scheduled to begin at 4 p.m. MT in Golden.

LARAMIE, Wyo. – The Air Force Academy men’s swimming and diving team were just barely edged out in a dual meet against Wyoming, 159-141, Friday evening, Oct. 18, at Laramie High School. The Falcons won six events overall, to go along with six runner-up finishes, but were DQ’d in the final relay to fall just short.

“It was an incredible college dual meet, as it came down to the final relay,” Head Coach Rob Clayton said. “We won the final three individual events to set up the final relay race. Unfortunately we were disqualified for being in the wrong lane in the final relay.”

“Despite the ending, it was an incredible meet, and we were very excited with how we swam,” Clayton continued. “I am very proud of the guys and how they battled back. It was a great meet all the way through”

The day began with a win in the 200 medley relay, as the squad of seniors Cole McAnany and Zach Nelson, as well as sophomores Aaron Pang and Corey Shepard placed first with a 1:31.11. Pang and Nelson weren’t finished though, as both captured individual wins as well. Pang had an upset win in the 100 fly with a 49.18, while Nelson took gold in the 200 IM with a 1:54.79.

Over on the diving board, AF had runner-up finishes in both the 1-meter and 3-meter, as sophomore Jack Macceca took second in the 1-meter, and freshman Brett Jenkins was second in the 3-meter.

The Falcons will be right back in action tomorrow, Oct. 19, when they take on in-state rival Denver. Action from the El Pomar Natatorium is set for a 1 p.m. start time.

“We had an amazing meet tonight, across the board our women stepped up and raced hard,” Head Coach Colleen Murphy said. “I am so proud of the effort the girls put into each and every race, they kept fighting and this was a huge step as we continue our rise in the Mountain West.”

Starting off the day in the 200 medley relay, seniors Heidi Schellin and Esther Min, along with junior Kylie Stronko and freshman Sefilina Maile took first with a 1:45.45.

Over on the diving board, sophomore Cristin von Schlag paced the divers with a pair of third place finishes on the 1-meter and 3-meter.

The Falcons will be right back in action tomorrow, Saturday, Oct. 19, when they open the home schedule with a tri-meet with Colorado State and Northern Arizona. Action from Cadet Natatorium is set for a 1:30 p.m. start time.