North America: Dressel Does The Unthinkable On Day 7 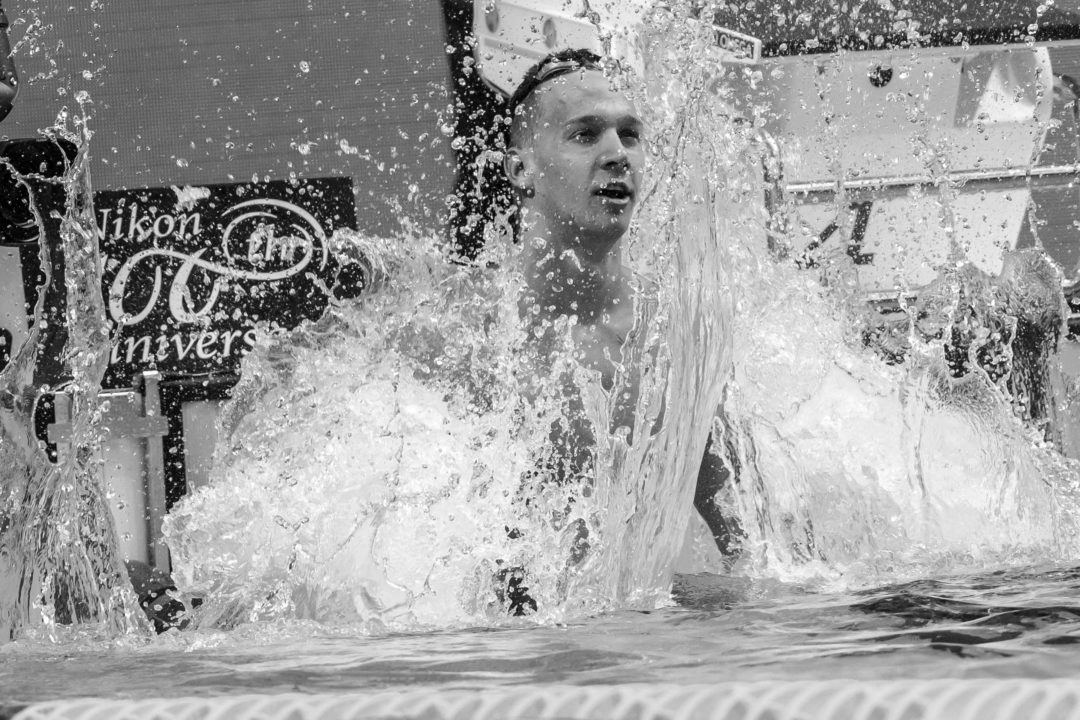 Caeleb Dressel made history with his performances on day 7 in Budapest. Current photo via Mike Lewis/Ola Vista Photography

After winning both the 50 free and 100 fly at U.S. Trials, questions arose about how Caeleb Dressel would deal with the double at the World Championships. He exuded a quiet confidence about it, mentioning that he trains to do doubles and continue to reiterate that he just focuses on one race at a time.

As the World Championships have rolled on this week, we began to get the hint that Dressel would be able to handle it. He broke the American record leading off the 400 free relay, broke it in the 50 fly finishing 4th, and then re-broke his 100 free record winning gold in the individual event. However, no one could’ve predicted what he had in store for days 6 and 7.

The 20-year-old Florida Gator easily qualified out of the 50 free heats in 21.61, and then shocked everyone when he clocked in at 50.08 in the 100 fly prelims, making him the 3rd fastest swimmer in history. In the semis, with less rest between the two, no problem. He broke another American record, this time in the 50 free, in 21.29. He then dropped 0.01 from his 100 fly prelim in 50.07 some 20 minutes later, setting himself up for an epic night of finals on day 7.

With the 100 free gold already behind him, two wins on Saturday would make Dressel the 4th American male to win three individual gold medals at one World Championships, joining Tim Shaw (1975), Michael Phelps (2003, 2007) and Ryan Lochte (2011).

The mixed freestyle relay was also on the schedule, and another potential gold there would make Dressel the first swimmer to ever win three golds on one single day at the World Championships.

The man did not disappoint.

Starting off with the 50, Dressel broke his American record from the semis in 21.15, winning gold and becoming the fastest swimmer ever in a textile suit, and 3rd all-time. About 35 minutes later he dove in for the 100 fly final. He won again, and it wasn’t close.

Dressel became the 3rd man to ever crack 50 seconds, passing Milorad Cavic as the 2nd fastest man in history behind only Michael Phelps in a time of 49.86.

He then led-off the Americans in 47.22, faster than he did on the 400 free relay on day 1, and just 0.05 off his individual winning time. Absolutely sensational. And his American teammates, Nathan Adrian, Mallory Comerford and Simone Manuel, did the job to secure the gold and a new world record in 3:19.60.

Currently sitting with six gold medals, Dressel and the Americans will be favored to win the men’s medley relay tomorrow and get Dressel a seventh. His six golds ties Missy Franklin‘s 2013 total, and seven would bring him equal to Phelps’ haul in 2007. Of course, we must remember both those were done prior to the mixed relays being added to the schedule in 2015. Still, we can’t help but marvel at how Dressel has performed this week, and particularly Saturday night. Simply historic.

The U.S. added four golds and two bronzes to increase their total medal count to 31, with 14 gold. Canada adds another mixed relay bronze for a total of three medals heading into the last day.

imo, he did pretty good

it was a decent effort.

Now the big question is, does he go pro and cash in or stay to swim a 17.9 39.4 42.7 at NCAAs? With pan pacs next year, hopefully the latter, but you never know when you’ll get hurt, lots of money on the table

I would cash out if I were him. While finishing the degree next year, obviously.

My guess is he could sign a deal with a major brand for about the same as what Phelps and Lochte had with Speedo.

I think he’ll continue his NCAA journey, it seems very important to him. Plus I think the long term plan with Troy all along is Tokyo, 50/100/200 free 100fly and 200 IM. He’ll be long past his ncaa days by then and ready to capitalize financially!

With the mixed medley added to Tokyo that would be 9 total events.

For once Bobo is speechless