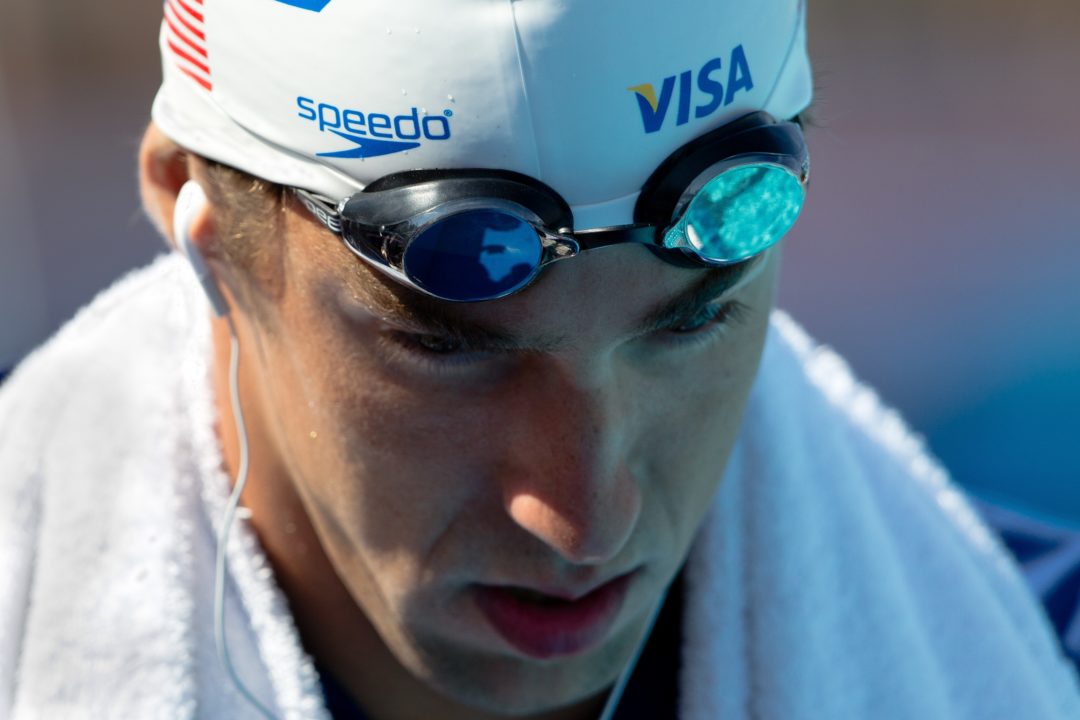 "We've spoken to sources close to Phelps, and here's their explanation for what happened..." (Photo Credit: Tim Binning, theswimpictures)

The worst-kept secret in swimming is that there are no secrets in swimming. Sure, the explosion of information available on the internet and through social media might be changing; the willingness of people to give said information to sources like SwimSwam, who will report it to the masses, might be new. But there are no secrets in the giant game of telephone that is the competitive swimming community. The sport’s top athletes are too accessible, too close to everyone else.

After Peter Busch of NBC2 in Fort Meyers broke the news that Phelps was making a comeback, Phelps Tweeted a retort that on its surface could be considered a denial, but when inspected more closely, did no such thing. It was a tweet that expressed frustration, yes, but not denial.

We’ve spoken to sources very close to Phelps, and here’s their explanation for what happened: Phelps has been considering this come back for about three months now. It truly had been planned. However Phelps, as understandably as anybody would in a similar situation, wanted to make the announcement on his own terms, and these were not his terms. This story was leaked by someone that Phelps trusted, though nobody we talked to would (could) speculate on who that leak was.

The frustration is understandable. Once the story leaks, when you’re one of the most influential athletes on the planet, it’s hard to take it back. If things don’t work out, then all of a sudden there’s folks who are let down that it didn’t work out.

What is a report of a “plan” to make a comeback? It’s really not verifiable or unverifiable. Plans often mean very little, especially in sports. Until Phelps re-enters the drug testing pool, there is nothing concrete, and nothing has really happened. A plan can be musings with friends over a beer as much as it can be carved with hammer and chisel into rock until certain thresholds are met. A few laps in a local pool for the greatest swimmer ever is not a plan to come back. We all know what “Olympian Michael Phelps” training looks like as compared to “trying to stay in shape Michael Phelps” looks like in a pool.

This is a secret that everyone at the top level of swimming knows by now, and we discussed with both those very close to Phelps and those who were more steps removed. Nobody would discuss it on the record, but this is how swimming is: nothing is a secret, but the person who caused the leak is almost always a secret.

Hopefully, this publicity hasn’t scared him away from the sport that he grew in popularity unlike anybody in the modern era; hasn’t reminded him of the pressure that it means to be Michael Phelps. Many fans had made their peace with the end of the career of Phelps and moving into the Nathan Adrian/Ryan Lochte era of men’s American swimming. We all have to face it though: Phelps is good for business in swimming. He is the greatest, comeback or not, that won’t change until someone wins medal number 23, or finds some other way to overwhelm the body of Phelps’ work.

Now, we’ll all sit back and watch the show, and respect Phelps’ right to make his own announcement. From here on out, as far as SwimSwam is concerned, it’s his show. We’ll report it when he or his representative reports it on the record, or he rejoins the testing pool, or until he enters a meet, or does something else similarly concrete, and nothing until then.

pls give me a tips to swim well. becos i want to swim like you. i cant swim easily like you. im your great fan.

Sorry I’m late, but wow. Gotta love how some of you made what is really Phelps’ and Phelps’ decision alone and made it about yourselves.

He may be the greatest, but he’s also a grown-ass man who should be able to do what he wants without the peanut gallery going up in arms over it. If he intends to do it, it will be for himself; he has no need to answer to anyone, especially some of the loons here.

Phelps was golfing today and no signs of him in the pool yet. In an appearance earlier this week he again denied coming back. I’ve looked long and hard into the future, as most of you are aware, and I see no Phelps in the Olympics in 2016. Let’s put this to rest.

I can only get on board with this under one condition. He never again shows up at an international meet… medals… and complains how out of shape he is. He lost a lot of respect from me in 2009-2011. If he wants to be a competitive swimmer, he is blessed to be able to make that his job. If he doesn’t want to swim, I don’t see the benefit of proving that he can beat 99% of swimmers without putting in much work.

I bet he stays retired. He has nothing to prove, has a ton of dough and is probably sick of the training grind.

That does not mean he will not swim for recreation to stay in shape, it’s great exercise.

18 Olympic gold medals and a few silver and bronze. I think he is finished, but I’ve been wrong before.

What do you want to make the bet on?

I am betting Phelps will come back before Rio.

What did Lochte say……..my word I hope this is true! And agree with some comments regarding 100 free and fly…I’ve mentioned many times on FB that he could easaily get medal in 100 free when you consider his relay splits….was fastest of US team in London and broke US record leading off in Beijing…and of course the 100 fly…..would be close to Le Clos but for sure must ditch IM’s / 200 fly / 200 free….

If you consider relay splits as a base for anything Bousquet should have been untouchable by a large margin on the 100 free since PVH retired..

Zzzzzzzzzzzz. What is the crazy interest about an unconfirmed “comeback” less that six months after Michael’s retirement? Do people really have that little faith that US swimming can’t fill Michael’s shoes? Sad.

Yes! Name the swimmer (singular, not plural) that would fill them.

Don’t get me wrong. I think another round of Michael would be great–especially if he takes more of a leadership/mentors hip role with the next generation of athletes. But yes, there are plenty of up and coming new swimmers who will fill his shoes. It’s insulting to think otherwise.

In the flies, look at Tom Shields who really hasn’t scratched the surface of his abilities. In the IMs look at Chase Kalicz and David Nolan who I believe will translate his short course successes to long course.

In the frees, look at Conner Dwyer and a load of new up and coming 200 swimmers. In the backs, wow, USA Swimming is simply loaded.

David,
I wanted to tell you how much respect I have for you! MP, Ryan Lochte, etc., owe you a big debt of gratitude because you were the first person to demonstrate how important underwater dolphin kicks could be to improving race times. I wonder if any of them have sought you out to thank you, because they really should. Also, when I was coaching, I attended a clinic you ran in RI, and you really made a big impact on the swimmers I was working with at the time. Thank you for your contributions to U.S. swimming!

So you don’t believe that MP will “unretire”?

Yes Yes Yes!!!! I was hoping he’d get bored. He’s only 27, for goodness sakes. There are many world class sprint athletes in other sports up into their early thirties. Endurance too, actually. You just have to train smarter. I would love to see Phelps experiment with USRP training. I doubt BB would be on board with that. But it could be fun for Michael to try, and prevent the burnout of daily grind. Or at least check out what the Dutch are doing– kicking butt for such a small nation. He could always go back to his old way of training if he didn’t like the results of the USRP.