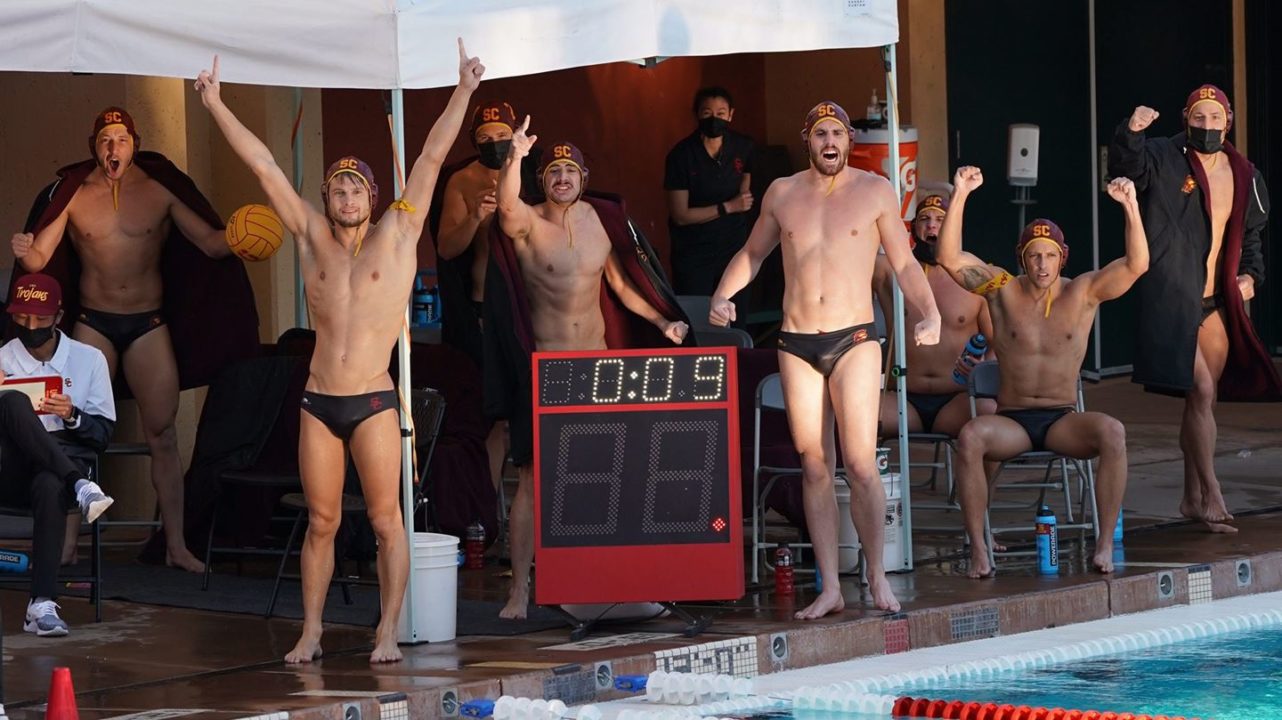 WESTWOOD, CALIF. — The No. 4 USC men’s water polo team churned out a 21-5 win to open up the MPSF Tournament today, topping Austin College in a quarterfinal bout that sends the Trojans on to tomorrow’s semifinals. No. 4 seeded USC will take on top seed California at 11 a.m. tomorrow (March 6) at UCLA’s Spieker Aquatics Center.
A whopping 11 Trojans scored in the powerful performance, led by freshman Tony Nardelli’s six-goal outburst. USC scored the first 11 goals of the game, going up 8-0 in the first frame with Jake Ehrhardt and Carson Kranz each scoring a brace in that first frame. Austin College would get on the board in the second, only to see Ehrhardt punch up his third. Another Roos goal came next, and then Max Miller and Chris Agliozzo added to the Trojan tally to make it a 14-2 USC lead by halftime. In the third, scoring would slow a bit, although Tony Nardelli was just getting into his groove. He’d punch up two, and Bennett Winther joined the scoresheet next, and USC led it 17-3 entering the fourth. There, Nardelli’s strength at set generated three more goals for the Trojan cause, while Alexander Lansill became USC’s 11th scorer on the day en  route to the final 21-5 decision for the Trojans.
USC is looking to make a run at a 12th MPSF Tournament championship, with the net step coming in tomorrow’s semifinal bout with Cal at 11 a.m. at Spieker Aquatics Center.
MPSF TOURNAMENT
QUARTERFINAL
[4] USC 21, [5] Austin College 5
March 5, 2021 | Spieker Aquatics Center (Westwood, Calif.)
USC  8 – 6 – 3 – 4 = 21
AC    0 – 2 – 1 – 2 = 5
SCORING:
USC — Tony Nardelli 6, Jake Ehrhardt 3, Jacob Mercep 2, Luke Wyatt 2, Carson Kranz 2, Wyatt Barker, Marcus Longton, Max Miller, Chris Agliozzo, Bennett Winther, Alexander Lansill.
AC — Robert Griffin 2, Alex Rodriguez 2, Max Wade.
SAVES: Vaios Vlahotasios (USC) 12, Zachary Griffith (AC) 2, Alan Rosenberg (AC) 2.
———————