No. 4 NC State Women Defeat Duke On the Road in Durham 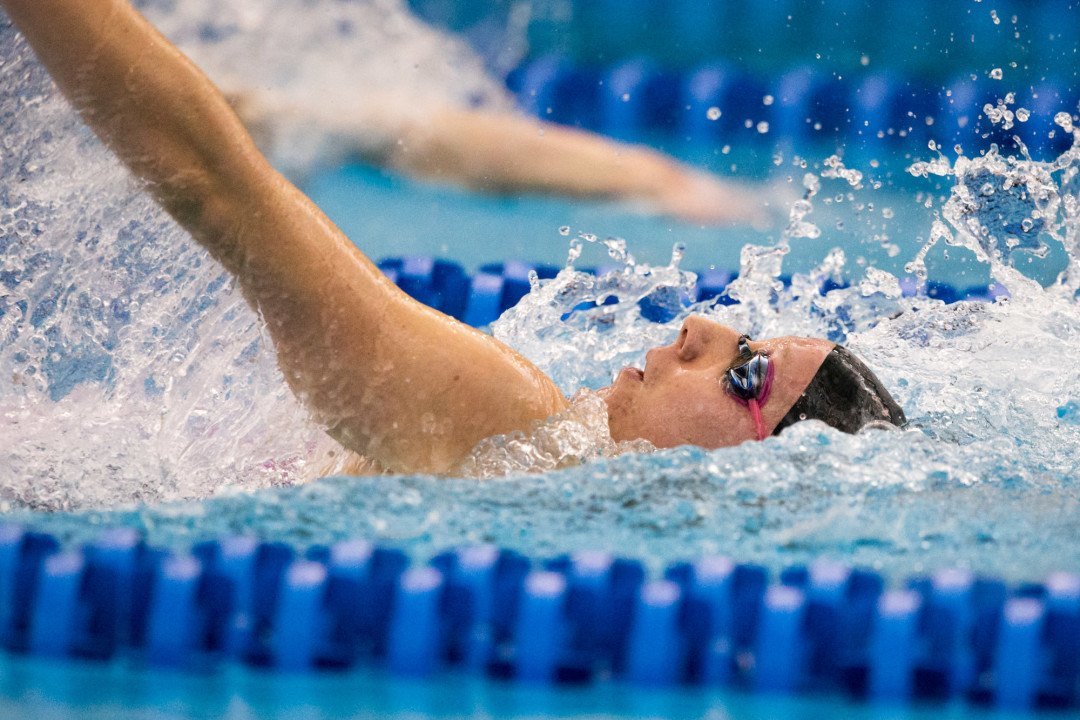 The NC State women’s team traveled to Durham, North Carolina, to face the Duke Blue Devils in their first away meet of the season. The Lady Wolfpack had a successful outing, coming away with both relay wins and 10 individual event wins. They also broke 9 pool records at the Taishoff Aquatics Pavilion.

In keeping with their strong diving tradition, the Duke women were dominant on both the 1-meter and 3-meter springboards. On the 1-meter, Duke held the top four spots, with Kirby Quinn winning the event (277.05). On the 3-meter, Duke finished 1st, 2nd and 4th. Mack Willborn was the 3-meter winner with a score of 304.35.

DURHAM, N.C.- In its first dual meet on the road this season, the NC State women’s swimming and diving team took down No. 19 Duke, 177-123, on Saturday morning inside the Taishoff Aquatics Pavilion.

This was the first ACC matchup for both schools, as the Wolfpack handed the Blue Devils their first loss of the season. NC State improves to 2-0 and Duke moves to 3-1 on the regular season. This marks the second team the Pack has defeated that is currently listed among the top 25 of the national poll.

Quoting The Coaches
Swimming
“Hats off to our women for coming out with a win today in a tough environment,” said head coach Braden Holloway. “Duke’s women gave our team some adversity to deal with, but we came together with a team effort to overcome an improving Duke team. We had some big-time races today with Hannah Moore, Elise Haan and Kayla Brumbaum winning two individual events each, and all three proved to be some big double event winners. Our sprinters also stepped up and came out with event wins at a much needed time in an area that Duke is very strong at.

“Our relays also showed some strength today, coming out with wins in both which is big. It’s not always pretty and perfect, and sometimes these meets are a grind just trying to get your hand on the wall. There’s areas we need to clean up and improve on but today was a good team win, and we’ll get back to work next week to prepare for Texas.”

Diving
“Today was a tough day on the boards,” said head diving coach Yahya Radman. “Madeline (Kline) and Rachel (Burston) did well in their first road meet. On the one-meter they were consistent but just shy of the mark – Duke just out-dove us. On the three-meter both of them dove exceptionally well, Madeline came to play and we’re still working on Rachel’s DD. Madeline was just shy of her Zone marks on both events, and it’s just a matter of fixing a few mechanics. Overall I’m pleased with today, but we have a lot of work to do to prepare for Texas.”

Wolfpack Relays
The Wolfpack women placed first in the two relays contested, setting Taishoff pool records in both events. The 200 medley relay team of Elise Haan, Kayla Brumbaum, Krista Duffield and Ky-Lee Perry turned in a time of 1:39.82 and the 200 freestyle relay squad of Perry, Lotta Nevalainen, Duffield and Courtney Caldwell stopped the clock at 1:31.03.

Both of the Pack’s ‘B’ relay teams finished third in their respective events.

The Pack had multiple individual stroke specialists sweep their respective events. Brumbaum set Taishoff pool records both breaststroke events en route to her wins, swimming a time of 1:01.66 in the 100 and a mark of 2:13.68 in the 200. Haan placed first in both backstroke events, touching the wall at 53.49 in the 100 to set a Taishoff pool record and stopping the clock at 1:58.33 in the 200. She managed to better her NCAA ‘B’ cut in both performances.

Diving
NC State had two competitors on the diving boards on Saturday, Madeline Kline and Rachel Burston. In the one-meter dive the pair finished fifth and sixth as Kline earned a score of 265.75 and Burston carded a 257.33.

In the three-meter event Kline placed third with a score of 277.88 and Burston finished sixth after posting a 253.20.

Up Next
The Pack will be back in action next weekend when it travels to Texas Nov. 4. The dual is set for a 6 p.m. ET start, as both Longhorn programs are ranked among the top 10 of the latest CSCAA national poll.

DURHAM, N.C. – The Blue Devil swimming and diving teams split a pair of dual meets in Saturday’s home opener, with the men defeating Northwestern, 185-110, and the women falling to fourth-ranked NC State, 177-123.

Following Saturday’s action, the Duke men improved to 3-1 overall and the women slipped to 3-1 and 1-1 in ACC competition.

“The Duke men and women swam incredibly tough and dove even tougher,” said head coach Dan Colella. “The divers just absolutely dominated the boards today and had some really great performances. For the men, we had a number of exceptional performances. In the past, sometimes when we’ve started getting out in front things get a little relaxed, but they competed hard from start to finish. Really proud of the women and how they competed against NC State … We knew that it was going to be really difficult to beat them today, but more than anything, our women didn’t back down one iota.”

The Blue Devil divers started off the morning on a high note at Taishoff Aquatics Pavilion, sweeping all four springboard events. Senior Kirby Quinn won the women’s 1-meter competition for the second consecutive week, besting the field with an award of 277.05. Freshman Nathaniel Hernandez turned in a similar result at the 1-meter height, winning with a score of 308.63 points, while teammate Evan Moretticlaimed the 3-meter event at 381.90. Sophomore Mackenzie Willborn totaled 304.35 points in winning the women’s 3-meter competition.

Sophomore Roger Kriegl and junior Matt Johnson were second and third, respectively, in the men’s 1,000 freestyle, with Kriegl’s 9:27.13 clocking placing him seventh in school history. Takabayashi returned to the water to register a first-place showing in the 100 backstroke (48.58), while sophomore Maddie Hess (55.16) was second in the same event on the women’s side. Takabayashi later notched his second individual win in the 100 butterfly at 49.35.

Senior Peter Kropp led a one-two-three-four effort by Duke in the men’s 100 breaststroke, earning an NCAA ‘B’ cut at 54.58. Sophomore Judd Howard (56.47), senior Bradley Cline (57.08) and sophomore Sean Tate (57.30) followed, and senior Ashleigh Shanley logged a second-place finish in the women’s 100 breaststroke (1:03.48). Kropp and Howard would go one-two again later on in the 200 breaststroke, with Seaberg finishing third.

Senior Dylan Payne joined the Blue Devils’ group of individual event winners, touching first in the 100 freestyle (45.23). Cline (45.92) and freshman Miles Williams (46.13) took second and third, respectively, before sophomore Max St. George won the 200 backstroke at 1:49.01. Freshman Alyssa Marsh had similar success in the women’s 100 butterfly (53.97) and Miller rounded out the individual events with a first-place performance in the men’s 200 IM (1:50.50).

Legard, Payne, Seaberg and Williams combined to take first in the men’s 200 freestyle relay in the final event of the meet.

“Our next competition will be in three weeks when we go to Greensboro,” Colella said. “That will be prelims, finals, which they’re going to be very excited for. I think our athletes performing like they did here only adds motivation to the next three weeks. We have some more hard work in front of us.”