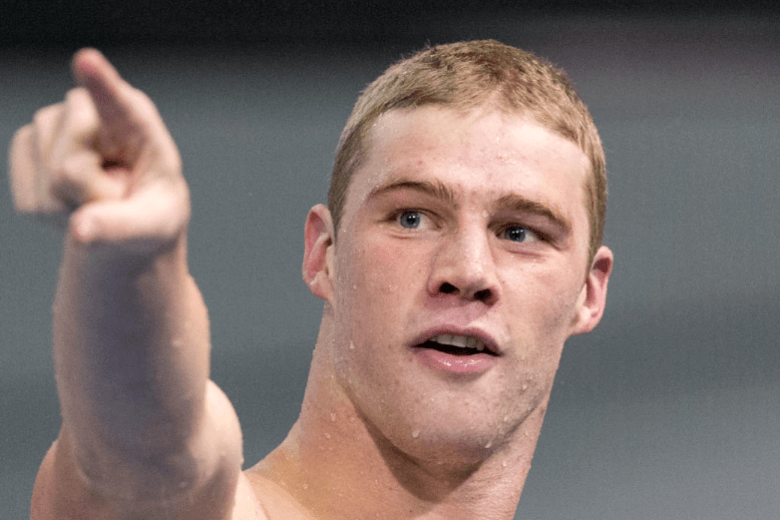 Kevin Cordes, on breaking the American Record: "I tried to take it out faster and it really worked with the speed in my turns." Current photo via Tim Binning/TheSwimPictures.com 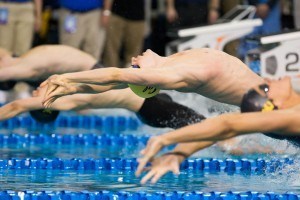 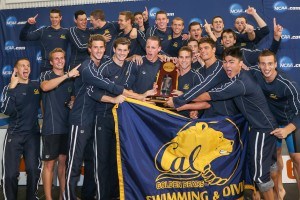 On how important momentum is in a meet of this caliber: It’s very important. Just having the whole team behind us and seeing our fans in (Cal) Bear suits just really got us going. We honestly didn’t think we had a chance to win that. We just wanted to go fast and do the best that we could.

On if the relay went according to plan: It went a little better than planned.

On breaking the American record: It was pretty good. We didn’t think we’d break it by that much so it was pretty exciting so we’re moving on to our next events now.

On winning so many NCAA titles in his career: It never gets old. It’s what you work for the whole year. the team works for it. I’m really excited to bring another one back to Arizona.

On breaking his American record twice today: I’m pretty excited so far. It’s not over. We still have a lot of work to do but it’s really a good feeling.

On his race: I tried to take it out faster and it really worked with the speed in my turns.

On if an NCAA title is better the first or second time: I don’t know, it’s different. I think the first one I never realized how it would feel to be a national champion. I wasn’t here to defend anything. I’m always attacking, I just feel unstoppable.

On winning an NCAA title in his senior year: It’s really good. I’m returning something back to the university that has done a lot for me. I remember when I first came to Louisville I had no idea what Louisville was. It was something new for me and way different from where I’m from. They supported me and they did so much for me. I’m very happy to be able to give something back to them. This school means a lot to me.

On winning the NCAA title as a freshman: That’s been the goal all season, especially with how this meet has been going. I put a lot of pressure to perform well at that event for the team and I think we’ve got a lot of momentum now going into this last relay and into tomorrow as well.

On his mindset going into the race: For that race I just wanted to go out fast because I knew there was a bunch of really fast guys in that race. I just hoped that my 200 training would help me in that last 25.

On breaking the American record: It’s been a goal of mine all season long so to finally accomplish it, I couldn’t be happier right now. I feel like I’m on top of the world right now.

On if he thought he could break the record: Obviously when you set goals you have to believe in yourself. I had an idea but luckily it worked out for me today.

On being an NCAA champion: It feels just as good as it did last year. It never gets old.

On his contribution to Texas’ point total: We had a great prelims this morning and we kept the finals going. Those 20 points will help. Any points will help here. It’s going to be tight. Cal is swimming unbelievable.

On how much the crowd energizes him: That crowd is unbelievable. Having my boys right there, right beside the 3-meter, that was unbelievable. I kind of went a little crazy after my last dive, probably a little bit too much. I just tried to get them going.  It was an unbelievable atmosphere out there.

On his performances so far: It’s my last NCAA (Championships) so it’s a big deal for me how well I’ve done these two days. I’m really proud of what I’ve accomplished. We still have one more day and I wanted to step up and go fast. It’s really been good.

Oh true 100 fly winner must have not been important

False, he held a press conference