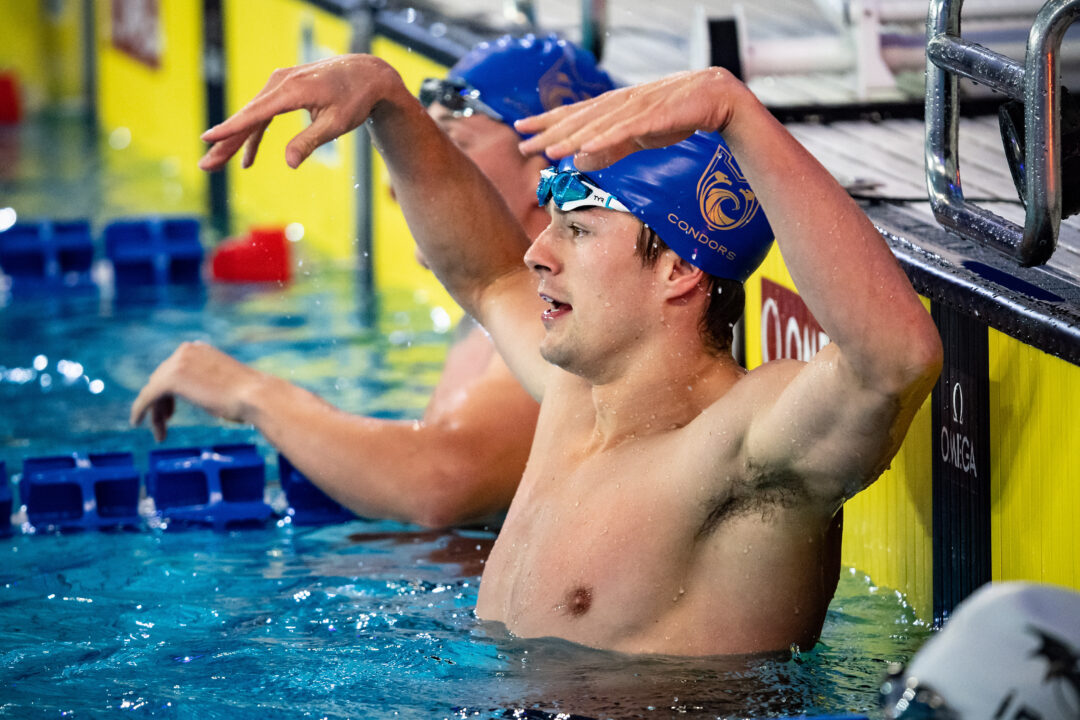 Nic Fink pulled a huge upset for the Cali Condors in the 50 breaststroke on Friday, and in the process broke the American Record in the event. Archive photo via Giorgio Scala / Deepbluemedia / Insidefoto

Nic Fink took away a huge upset and a new American Record from the men’s 50 breaststroke on Friday at the International Swimming League grand finale.

The American Record for Fink, who has been swimming well of late, is less of a surprise than the event upset was. He beat out, among others, the World Record holder Ilya Shymanovich, who swam 25.25 at the European Championships a month ago to tie Cameron Van der Burgh’s 2009 record.

Shymanovich finished 2nd in 25.81, and that .09 second gap meant a 24-point swing in team scoring between Fink’s Cali Condors and Shymanovich’s Energy Standard: the two teams that are expected to contend for the title on Saturday.

Shymanovich has been better than 22.81 nine times during the 2021 fall short course season. That is to say, 22.81 is his slowest time of the season. This is Shymanovich’s second loss of the season in the event, after Match #14 (Playoff #3).

Now Fink, with wins in the 50 and the 200, has the upper-hand in the 100 breaststroke on Saturday, which could be a big matter if the team race stays competitive.

Post race, the face of Ilya Shymanovich said it all about the upset: he looked shocked by the upset in a field where he was a heavy favorite.

Fink, after wins in the 200 breast, 50 breast, and the medley relay, currently leads the ISL Grand Finale MVP standings. The winner of the MVP of the grand finale (not the whole season, just the match) receives a $20,000 bonus.

Fink now climbs one spot into the top 10 among all-time performers in the event. The 2nd-fastest American in the race is Ian Finnnerty, who was 25.99 during the 2019 ISL season.