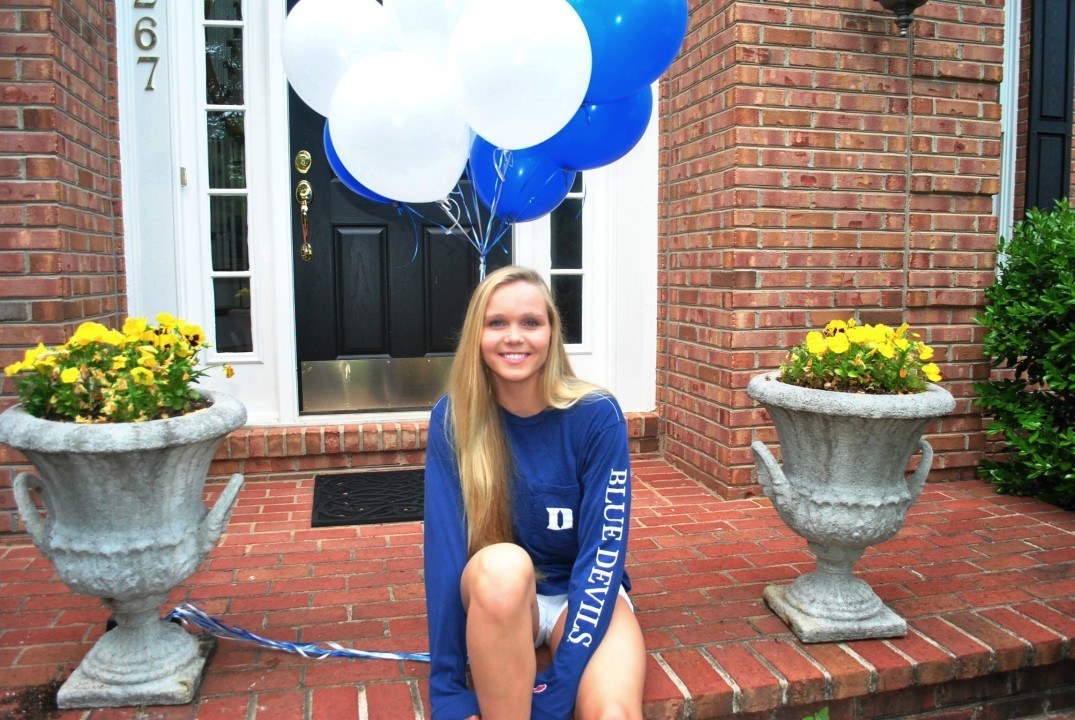 Virginian Kylie Jordan has verbally committed to the Duke Blue Devils, but won't arrive until the fall of 2016. Current photo via Kylie Jordan

“I chose Duke University because it has the perfect balance of academics and athletics that I am looking for,” Jordan said of her decision. “Dan Colella is a great coach and will help me to improve my times.  When I took my unofficial visit to Duke, I fell in love with the team and the campus and believe it will be a great fit for me.”

For the past few seasons, the Duke women have had a rapid ascension in their recruiting, including cracking the top 12 classes in the country in 2014. While the trend began before the announcement, it would be hard to separate the recent success from the announcement 18 months ago that the women’s program would be advanced from 2 scholarships to 14 scholarships.

When the junior arrives on the Duke campus in the fall of 2016, she will expect to have at least two years to train alongside Leah Goldman and Isabella Paez, both of whom just completed their freshman seasons. The connection is that Goldman and Paez ended the year as Duke’s two representatives to the NCAA Championships, where Goldman raced in the 100 free, 200 IM, and 100 fly; and Paez raced the 100 and 200 flys. Those races are very similar to the lineup that Jordan would expect to swim for the Blue Devils.

Additionally, Jordan’s lifetime best in the 200 free would be the school record in the event by four-tenths of a second (though there’s a good chance that the record will be faster by the time she arrives on campus).

Jordan attends Madeira High School, and is a 6-time individual VISAA (Virginia Independent Schools) state champion out of 6 swims through her junior season. More impressively, she’s broken a league record in each of those 6 swims to date.

She also went 2-for-2 at her first Washington Metro Championships (another prestigious high school meet for teams in the D.C. area) this year. On the club level, Jordan is a multiple-time A-finalist at the NCSA Junior National Championships in short course, but in long course says that her goals for her senior season are to really improve her long course times.

Jordan does her club training under John Flanagan. Prior to taking on swimming full-time, she also played soccer, basketball, and danced ballet, and played the cello.

Congratulations Kylie! We are all very proud of you. You have worked very hard and Duke is fortunate to have such a wonderful young lady joining their school and team. Your family, friends, school and club are all excited for you and look forward to watching you excel as a Blue Devil!