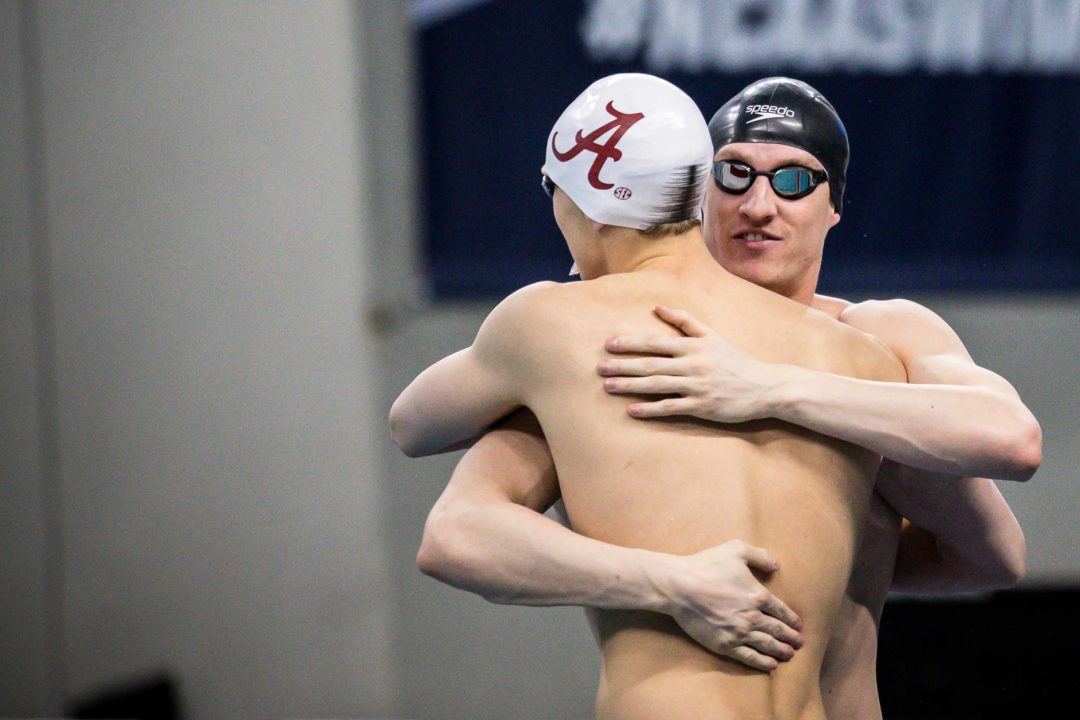 Howard would have been entered in the top 8 in both the 50 and 100 freestyle at the upcoming 2021 US Olympic Trials in Omaha. Archive photo via Jack Spitser/Spitser Photography

2019 NCAA medalist Robert Howard has retired from competitive swimming and will therefore not be present at the 2021 Olympic Trials. Howard holds a PB in the 50 free of 22.00 and a 48.37 in the 100 freestyle. Those times would have given him an 8th place rank in both events at Trials.

Without Howard, Tate Jackson (who also isn’t entered at Trials), and Jack Conger (who is entered the meet but not in the 100 free), that means 3 of the would-be top 10 seeds in the 100 free at the Olympic Trials won’t be racing the event.

Howard told SwimSwam on Thursday that he retired after the 2020 ISL season. He went back to Alabama in May, but that things just “didn’t work out,” and he decided to retire. He joins other members of that Alabama pro group Margo Geer and Ian Finnerty in announcing retirements within a few months of the Olympic Trials.

Having graduated with an accounting degree from the University of Alabama, Howard began studying for the CPA exam in January of 2021. He has a job lined up with Deloitte, the largest professional services provider in the world, in Atlanta this fall.

Howard raced internationally for the US at the 2019 World University Games as a member of the 4×100 freestyle relay. He, along with Zach Apple, Dean Farris, and Tate Jackson delivered a 3:11.03 gold medal performance to beat out Brazil’s 3:15.27 for silver and Italy’s 3:15.91 for bronze.

Howard represented DC Trident during the 2020 ISL season and contributed to a number of their relays. In his only individual race, Howard swam the 50 freestyle at match 4, placing 8th with a 21.94.

Glad to see a fellow swimmer-turned-Big4-accountant. Life in public accounting can be stressful, but I always felt as if my experience with juggling swimming/work/school did a great job preparing me. Given that Bob has had to juggle these with a much, much more rigorous training regimen than I’ve ever had to deal with, I think he is beyond prepared for the career ahead of him. Good luck!

Congratulations Robert! I’m so happy for you and wish you the best in all of your future endeavors! Sitting next to your Dad has been the best!

So word is slowly coming out that Tyler blocked the pros training with the college team causing a ripple effect.

Didn’t this kid have trouble in the Illinois swim scene as well?

How does one single swimmer cause all of this?

Congrats to Bob for a memorable career beginning with Auburn Aquatics as an age grouper, and then onto UA as a college swimmer. He did great all along the way, and is a great guy. His folks should be proud.

Best of luck to Robert and congrats on his future career.

I believe his retirement came in October(?) after the university prohibited him from facilities because of another athlete. Shame the school wouldn’t support a tremendous athlete in pursuit of his dreams after having such an admirable career at UA.

A certain swimmer on the team (who has been mentioned in the comment section – Tyler S) apparently had a personal vendetta against some of the pros and certain Alum, preventing the whole pro team from training with the college team when the team was being phased back in from COVID.

Isn’t it against the rules for pros to train with the college team?

When it’s time it’s time. Amazing career at Bama and good luck for what you do next!

If Deloitte picked him up, he’s got a good professional career ahead of him.