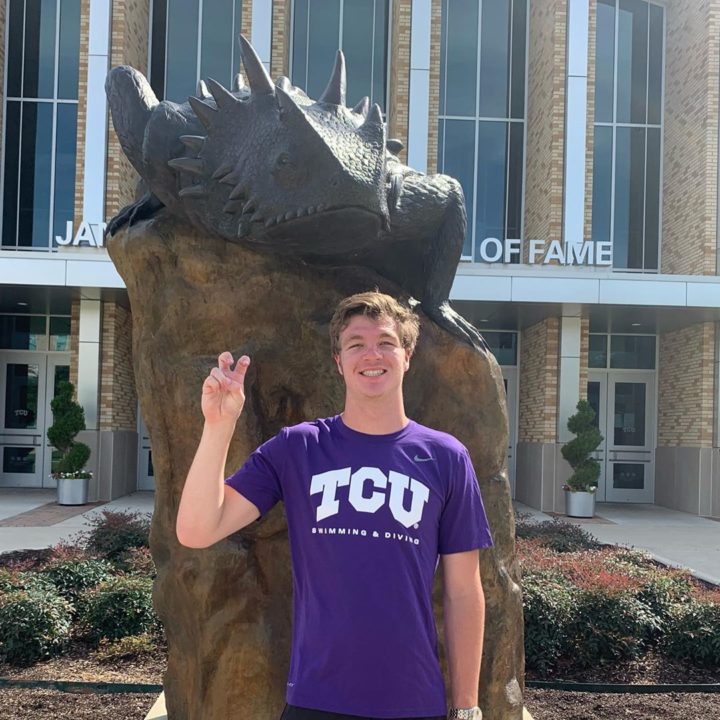 Rising 6’6″ junior freestyler Bennett Maczka is transferring from NCAA Division II Queens University to Division I TCU next season. He has 2 years of eligibility remaining.

After missing the NCAA Championships as a freshman in 2019, in 2020 Macska qualified for the meet in the 200 free. The meet was ultimately canceled midway through the 2nd day of competition with the oncoming coronavirus pandemic.

On day 2 of the meet, Maczka placed 10th in the 200 free, qualifying for the B-final. He was also scheduled to swim the 100 free individually, where he was the 32nd seed.

Maczka attended Pearce High School in Plano, Texas, which is about 50 miles from the TCU campus. There, he was primarily a sprint freestyler, but at Queens he really progressed into more of a 100/200 yard swimmer, with his 200 free showing the most progress.

The TCU men finished 3rd out of 3 teams at last year’s Big 12 Championships. Because of the unique nature of the conference, where Texas is the dominant team but doesn’t usually take a full swing at the conference beet, there’s a unique two-team dual meet between West Virginia and TCU to decide 2nd in the conference. Last year, for example, there were only 7 scorers at Big 12s in the men’s 200 free, with Texas taking the top 4 spots, TCU the next 2, and West Virginia the last.

While West Virginia beat TCU at the meet overall last season, the middle-distance freestyles are an area where the Horned Frogs were able to post a significant scoring difference relative to the Mountaineers, and so Maczka fits into that mold.

His older brother Blake was an All-American swimmer at the University of Michigan.

Proud of you Bennett!