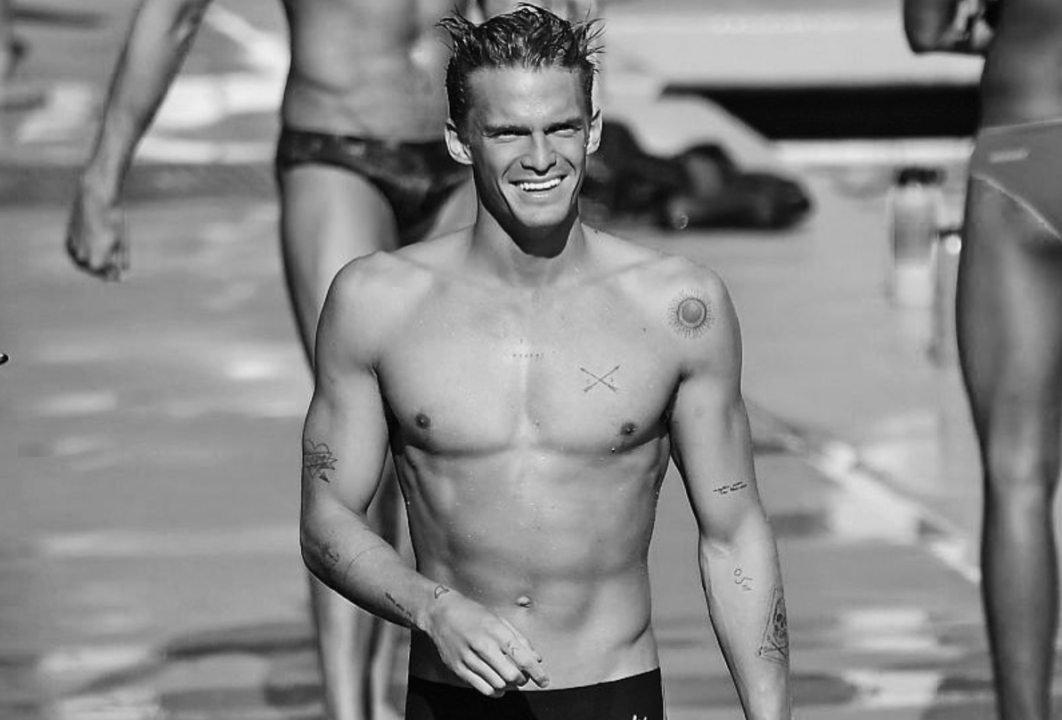 International music star, Cody Simpson is less known for his past as an elite Australian swimmer. Last weekend he made a return to the sport in a meet at USC. Current photo via Cody Simpson, Instagram

While 22-year old Cody Simpson is known by many for being an international singing sensation, what many people don’t know that he once had aspirations to be an Olympic swimmer. In an interview with Coca Cola Australia back in 2016, he detailed his past career as an elite Australian swimmer, prior to his musical stardom, and in the pre-SwimSwam era of predecessor site The Swimmers Circle, he was featured among the most-followed ‘swimmers’ on social media already, at only 14-years old. A son of two parents who were both swimmers, Simpson excelled in the sport from a young age. Beginning to compete at age 10, by 2012 he had won gold medals in the 100 fly and 200 IM at the Queensland Swimming Championships.

Simpson’s musical career took off when he released his debut single “iYiYi” in collaboration with Flo Rida in 2010. He was able to balance his swimming career with his musical endeavors for a couple years, until he and his family decided to move to L.A so that he could fully pursue his music. The decision to commit to his music is one that he says he doesn’t regret and believes has paid off. Simpson has since released three studio albums and has gained quite a massive following world wide.

With his last music release in March 2019, Simpson was recently launched back into the spotlight when he began dating A-lister Miley Cyrus following her split with husband Liam Hemsworth.

In May of 2019 a video was uploaded to a Cody Simpson YouTube channel of the singer swimming a couple laps of butterfly at a lane swim. The video, entitled “Cody Simpson swimming the Butterfly stroke (2019)” showed a promising stroke with some definite room for improvement. He’s leading his stroke with his head, breathing a bit late, and is a bit up-and-down in his body motion, but his results at the meet weren’t bad for someone who isn’t training full-time as a swimmer.

Last week, Simpson decided to make his return to competition by racing at a swim meet at the University of Southern California. Simpson stayed true to his 100 fly roots and swam the event, representing the Trojan Swim Club-CA. He finished 24th out of 29 entrants in the 100 yard butterfly, swimming a time of 51.51 in the final (23.50/28.01).

Simpson also joined Trojan Swim Club’s Daniel Skaaning, Jerome Heidrich and Luca Spinazzola in the 200 yard freestyle relay later that session. They finished in a time of 1:23.55 for 8th place, with Simpson splitting a 21.27.

While he may have been the only international music star competing last weekend, Simpson was join by a couple big names in swimming. Namely, Jacob Pebley, Michael Chadwick, Kendyl Stewart and Marius Kusch were there for Team Elite, along with Olympian and open water power house Haley Anderson for Trojan Swim Club-CA.

Who’s coming back to this after Cody went 51.79 LCM at world trials? Insane exponential improvement! Going from 51 SCY to 51 LC in 2 years!

There are a few ex swimmer celebrities around- if FINA had any marketing nous it would sign them up as ambassadors for the sport.

Waiting for Cody to be in ISL

He could pretty easily swim at a bunch of D1 mid majors or Kenyon/Denison/Emory etc with those times. I’m impressed.

I hope Miley Cyrus was there to cheer him on!
Good SCY times there.

I’d like to see a 50 free race between him and Joe Thomas now.

Ouch, after that stroke critique, I was impressed after watching the video, not as bad as the critique.

I agree. The critique seems harsh and quite unnecessary. His stroke looks pretty darn good to me. He’s subjected to hypercritical dissection because he’s a singer? I don’t see anyone else’s stroke being nit picked here.

Exactly . There are no points for execution. . I can imagine a short flyworkout would be good for the lungs esp in open air . Too much & it is chlorine allergy affecting the voice & of course the obligatory asthma.

I was even more impressed with the times

He held a few Qld school records for a while and Qld is a strong swimming state .

School swimming is a joke though.

Club swimming is much bigger in Australia. Swimmers routinely sit out school states to focus on club nationals in Queensland.

Cody was a solid age grouper with some potential. Really nice kid too. Obviously made the right decision in terms of career choice. But the school record really doesn’t indicate much.

Some are slow records and some aren’t . Swimmers from bigger clubs are sometimes told not to swim school states . But you’ll see that swimmers like Elijah Winnington and others set some good records .

Probably cause none of them tend to swim tapered at the school states or nationals. . Qld school states are always just a couple of weeks before age nationals (which is a selection meet) for example . Lani Pallister swam 8.29 this year untapered for a qld school record , then did 8.25 at world champ selection trials and 8.22 at world juniors .