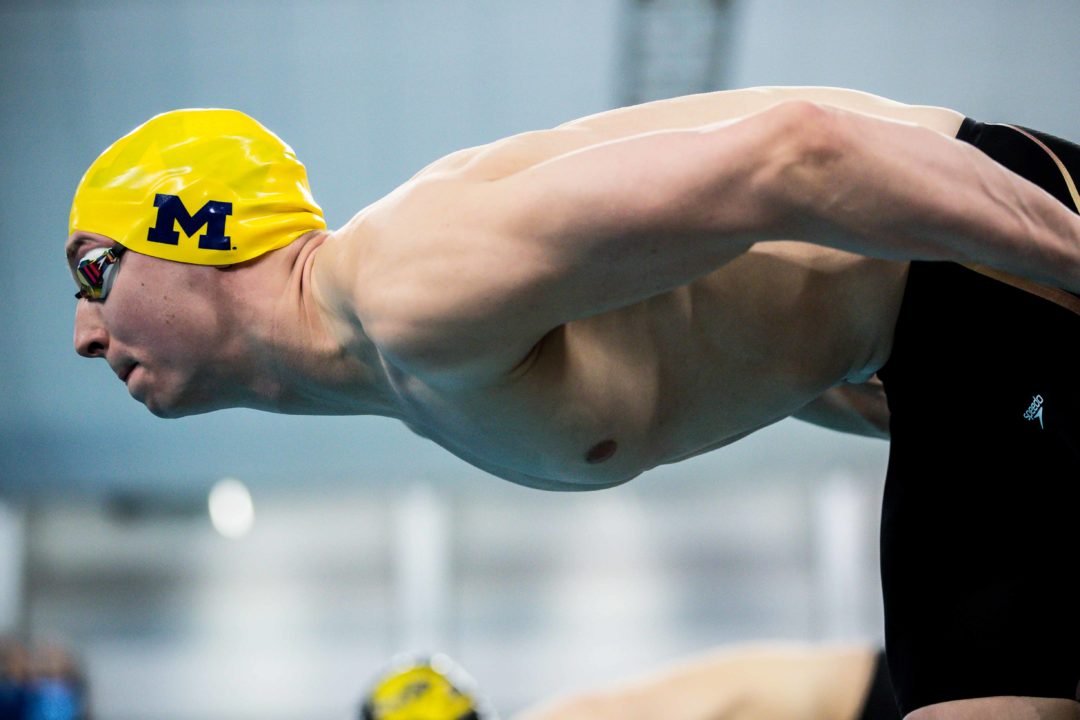 In the final Big Ten race of his career, Michigan senior Tommy Cope went on to take his first individual title as the 200 breast champion. Archive photo via Jack Spitser/Spitser Photography

The fastest man through the afternoon was Wisconsin’s Matthew Hillmer, who dropped over 9 seconds in 15:00.25. That’s faster than 2 of the seeds in the final.

The Michigan men cemented their victory on Saturday night at the 2020 men’s Big Ten Championships. It was their first Big Ten title since 2016, ending a 3-straight winning streak for Indiana. Prior to Indiana’s win in 2017, the Wolverines had won 6-straight titles. This is the program’s 41st title.

Senior Felix Auboeck swam to a pair of historic wins, earning his 4th-straight titles in the 500 free and 1650 free. In the mile, he took down a 7-year-old Pool Record set by Michigan’s Connor Jaeger in 2013. Jaeger was an NCAA Champion and Olympic medalist during his career at Michigan. Auboeck is the reigning NCAA Champion in the mile.

Likewise, teammate Charlie Swanson earned his 4th-straight Big Ten title in the 400 IM. Michigan’s combination of Swanson, Ricardo Vargas, and Tommy Cope have swept the podium in each of their 4 years. Vargas took silver in the 400 IM, silver in the mile, and bronze in the 500 free.

In the final Big Ten race of his career, Cope went on to take his first individual title as the 200 breast champion. He also earned a silver in the 200 IM and 400 IM.

The Wolverines had Miles Smachlo win back-to-back titles in the 100 fly. Ross Todd was the 1-meter diving champion. Sophomore Patrick Callan took silver in the 500 free to sweep the podium with Auboeck and Vargas. He joined Auboeck, Cope, and Swanson on the 800 free relay. The Wolverines won the title there with a new Pool Record.

Glad to see Michigan back on top of the B1G. Future looks bright!

Many congrats to Michigan, but the OSU divers were outstanding! They deserve a story of their own.

Now that’s funny! MSU was a couple points behind.

So happy to see this great senior class go out with a win, they deserve it. Let’s see what they can do in a couple weeks at NCAA